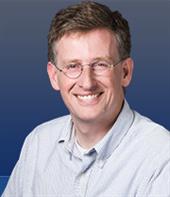 U. of I. Professor of Physics and Astronomy Charles Gammie
Professor Charles Gammie has been named a 2015 Simons Fellow in Theoretical Physics by the Simons Foundation.

Gammie, who has joint appointments in astronomy and physics at the University of Illinois at Urbana-Champaign, will use the fellowship to continue his leading-edge theoretical work in black hole astrophysics, while on sabbatical next academic year at the University of Oxford in the United Kingdom. While abroad, Gammie will also enjoy an appointment as a visiting fellow at All Souls College in Oxford, for the fall (Michaelmas) term.

A major thrust of Gammie’s theoretical work at the U. of I. is investigating the gravitational field of black holes, particularly in the unexplored strong field regime near the black hole event horizon, and using that to test general relativity, one of the fundamental theories of physics.

A related research focus for Gammie is exploring the physics that govern black hole accretions. Accreting black holes are among the most luminous objects in the universe; the radiation from supermassive accreting black holes at galactic centers can outshine their entire host galaxies. Accretion disks can also affect the evolution of a galaxy. Specifically, Gammie’s team was the first to develop fully relativistic fluid models of the luminous hot plasma that surrounds black holes, elucidating emission properties of hot plasmas, and developing techniques for relativistic radiative transport that can be used to simulate observations, including inclination, spin, and accretion rate of the black hole.

Gammie’s group at the U. of I. has been active in laying the theoretical groundwork for the North American Event Horizon Telescope and the European Black Hole Cam collaborations (EHT/BHC). These collaborations are working together to create an expanded network of millimeter-wavelength telescopes that, by 2017, may provide the first-ever high-contrast image of the silhouette of the supermassive black hole at the center of the Milky Way galaxy.

Gammie’s team is currently developing new models for Sgr A* at the center of the Milky Way galaxy, known to contain the supermassive black hole. The new models take into account the physical processes present in hot, dilute (collisionless) plasmas: heat conduction, viscosity, and decoupling of the temperatures of the plasma’s constituent ions and electrons.

Because dissipative relativistic fluid theories that incorporate these effects are impossible to solve with existing numerical methods, his team is devising novel numerical techniques to solve them. Existing models also fail to account for modification of the flow by its own radiation field, a negligible effect in Sgr A* that is nonetheless important for the only other black hole candidate—in the nucleus of the galaxy M87—that will be resolved by EHT/BHC. This year, his team will complete the first models that self-consistently (relativistically) incorporate radiative effects.

While on sabbatical next year, Gammie will explore problems motivated by his teams new models of Sgr A*. Gammie is looking forward to the rich intellectual environment and new collaborations this opportunity will afford:

“Oxford has an excellent astrophysics program—one of the best in Europe—and lots of good people working in my areas of interest. I'm particularly excited about working with an old mentor of mine, Steven Balbus, who is now Savilian Professor at Oxford. I'm also excited about talking to people at Oxford who observe black hole candidates, as well as those who work in plasma astrophysics. All Souls is a postgraduate college that is focused entirely on research, and I'm told it provides a wonderful, interesting community of scholars to visiting faculty," he shares.