On the precision frontier: a new calculation holds promise for new physics 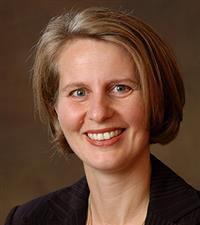 University of Illinois Professor Aida El-Khadra
A team of theoretical high-energy physicists in the Fermilab Lattice and MILC Collaborations has published a new high-precision calculation that could significantly advance the indirect search for physics beyond the Standard Model (SM). The calculation applies to a particularly rare decay of the B meson (a subatomic particle), which is sometimes also called a “penguin decay” process.

After being produced in a collision, subatomic particles spontaneously decay into other particles, following one of many possible decay paths. Out of one billion B mesons detected in a collider, only about twenty decay through this particular process.

With the discovery of the Higgs boson, the last missing piece, the SM of particle physics now accounts for all known subatomic particles and correctly describes their interactions. It’s a highly successful theory, in that its predictions have been verified consistently by experimental measurements. But scientists know that the SM doesn’t tell the whole story, and researchers around the globe are eagerly searching for evidence of physics beyond the SM.

“We have reason to believe that there are yet undiscovered subatomic particles that are not part of the SM,” explains Fermilab scientist Ruth Van De Water. “Generally, we expect them to be heavier than any subatomic particles we have found so far. The new particles would be part of a new theory that would look like the SM at low energies. Additionally, the new theory should account for the astrophysical observations of dark matter and dark energy. The particle nature of dark matter is a complete mystery.”

University of Illinois physicist Aida El-Khadra adds, “Scientists are attacking this problem from several directions. Indirect searches focus on virtual effects that the conjectured new heavy particles may have on low-energy processes. Direct searches look for the production of new heavy particles in high-energy collisions. The interplay of both indirect and direct searches may ultimately provide us with enough pieces of the puzzle to make out the new underlying theory that would explain all of these phenomena.”

Syracuse University physicist John “Jack” Laiho describes why “penguin decays” provide powerful probes of new physics: “In the observation of a rare decay, because contributions from the SM are relatively small, there is a good possibility that contributions from new virtual heavy particles may be significant. These would be observed as deviations from SM predictions. However, in order to know that such a deviation (if observed) is not just a statistical fluctuation, the difference must be conclusive—it must be at least five times larger than the experimental and theoretical uncertainties. So rare decays require high precision in both the experimental measurements and the theoretical calculations.”

Artist’s rendering of a rare B-meson decay process with depiction of the strong interaction corrections. Image courtesy of Aida El-Khadra, University of Illinois at Urbana-Champaign

B mesons belong to class of subatomic particles that are bound states of quarks and they feel the so-called strong interactions, also known by the colorful name Quantum Chromodynamics (QCD). Quarks are found inside protons and neutrons—which make up the atomic nucleus—as well as within other sub-atomic particles, such as pions and the aforementioned B mesons.

The new high-precision calculation employs lattice QCD to calculate the effects of the strong interaction on the process in question.

Fermilab scientist Andreas Kronfeld explains, “Decay processes that involve bound states of quarks receive contributions from the strong interactions, which are very difficult to quantify, especially at low energies. The only first-principles method for calculating with controlled errors the properties of subatomic particles containing quarks is lattice QCD, where the unwieldy integrals of QCD are cast into a form that makes it possible to calculate them numerically.”

The project was started when Syracuse University researcher Daping Du was a postdoctoral fellow at Illinois with El-Khadra.

“Our calculation is clean,” asserts Du. “We focused on a process for which lattice QCD methods yield small and completely quantified uncertainties.”

“We have witnessed amazing progress in lattice QCD calculations in recent years,” observes Enrico Lunghi, a non-lattice theorist at Indiana University, who joined the team for his expertise in rare decay phenomenology. “Lattice calculations have advanced to the point where they provide ab initio predictions of strong interaction effects with small and reliable uncertainties. This is how we are able to obtain a SM prediction of this process with better precision than previously possible.”

“Fortunately, we were able to leverage supercomputing resources across the U.S. for this project,” comments Indiana University physicist Steven Gottlieb. “In fact, this project is part of a larger effort by the Fermilab Lattice and MILC Collaborations to produce precise theoretical calculations of the strong interaction effects for a range of important processes relevant to precision frontier experiments. We used allocations at Fermilab (provided by the USQCD Collaboration), at the Argonne Leadership  Computing Facility, the  National  Energy  Research  Scientific Computing Center, the  Los Alamos National Laboratory, the  National  Institute  for Computational Science, the Pittsburgh Supercomputer Center, the San Diego Supercomputer Center, and the Texas Advanced Computing Center. “

After completing the new calculation and prior to its publication in Physical Review Letters [115, 152002 (2015)] in the article entitled, “ B→πll Form Factors for New Physics Searches from Lattice QCD”, the LHCb experiment at CERN in Switzerland announced a new experimental measurement of the differential decay rate for this decay process.

Fermilab scientist Ran Zhou concludes, “The recent measurements are compatible with our SM predictions, with commensurate uncertainties from theory and experiment. This puts interesting constraints on possible new physics contributions which are very useful for building models of beyond the SM physics.”

The team also recently completed another paper, entitled “Phenomenology of semileptonic B meson decays with form factors from lattice QCD,” in which they make additional predictions for related rare decays that have not yet been experimentally observed. Once observed, these decay processes likewise may play an important role in the quest to find the new fundamental theory that lies beyond the SM.

Members of the Fermilab Lattice and MILC Collaborations who contributed to this work in addition to those named above include Alexei Bazavov and Yannick Meurice of University of Iowa; Claude Bernard of Washington University, Chris Bouchard of College of William and Mary; Carleton DeTar, Ludmila Levkova, and Si-Wei Qiu of the University of Utah; Elizabeth D. Freeland of the School of the Art Institute of Chicago; Maria Elvira Gámiz of Universidad de Granada; Urs M. Heller of American Physical Society; Paul B. Mackenzie, James N. Simone of Fermi National Accelerator Laboratory; Yuzhi Liu and Ethan Neil of University of Colorado, Boulder; Robert Sugar of University of California, Santa Barbara; Doug Toussaint of University of Arizona, Tucson;  and Jon A. Bailey of Seoul National University.

Computations for this work were carried out with resources provided by the USQCD Collaboration, the Argonne Leadership Computing Facility, the National Energy Research Scientific Computing Center, and the Los Alamos National Laboratory, which are funded by the Office of Science of the United States Department of Energy, and with resources provided by the National Institute for Computational Science, the Pittsburgh Supercomputer Center, the San Diego Supercomputer Center, and the Texas Advanced Computing Center, which are funded through the National Science Foundation’s Teragrid/XSEDE Program. Funding for this work was provided by the U.S. Department of Energy under Grants No. DE- FG02-91ER40628, No. DE-FC02-06ER41446, No. DE-SC0010120, No. DE-FG02-91ER40661, No. DE-FG02- 13ER42001, No. DE-FG02-91ER40664, and No. DE-FG02-13ER41976; by the National Science Foundation under Grants No. PHY- 1067881, No. PHY-10034278, No. PHY-1417805, and No. PHY-1316748; by the URA Visiting Scholars’ program; by the MINECO (Spain) under Grant FPA2013- 47836-C3-1-P, and the Ramón y Cajal program; by the Junta de Andalucía (Spain) under Grants FQM-101 and FQM-6552; by the European Commission under Grant No. PCIG10-GA-2011-303781; by the German Excellence Initiative, the European Union Seventh Framework Programme under Grant Agreement No. 291763, and the European Union’s Marie Curie COFUND program; and by the Basic Science Research Program of the National Research Foundation of Korea (NRF) funded by the Ministry of Education (No. 2014027937) and the Creative Research Initiatives Program (No. 2014001852) of the NRF Grant funded by the Korean government (MEST). Brookhaven National Laboratory is supported by the U.S. Department of Energy under Contract No. DE- SC0012704. Fermilab is operated by the Fermi Research Alliance, LLC, under Contract No. DE-AC02-07CH11359 with the U.S. Department of Energy. The conclusions presented are those of the scientists, and not necessarily those of the funding agencies.