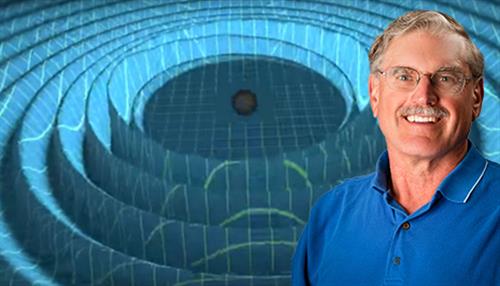 Physics Illinois Professor Stu Shapiro is an expert in numerical relativity and pioneered some of the early work in this field. Background image courtesy of LIGO.

In less than the blink of an eye Einstein’s theory of relativity is on its way to becoming just another science fact. Scientists observed gravitational waves—ripples in the fabric of spacetime for the second time—and researchers at the National Center for Supercomputing Applications at the University of Illinois at Urbana-Champaign were part of the Ligo collaboration identifying the event.

Scientists stunned the world in February 2016 with the announcement of the first detection of gravitational waves, a milestone in physics and astronomy that confirmed a major prediction of Albert Einstein’s 1915 general theory of relativity, and marked the beginning of the new field of gravitational-wave astronomy.  On December 26, 2015 a second event was observed. Both discoveries were made possible by the enhanced capabilities of Advanced LIGO, a major upgrade that increases the sensitivity of the instruments compared to the first generation LIGO detectors, enabling a large increase in the volume of the universe probed.

“Detecting gravitational waves will soon become a common occurrence,” said Ed Seidel, director of the National Center for Supercomputing Applications (NCSA) at the University of Illinois at Urbana-Champaign, who is also Founder Professor of Physics and professor of astronomy. “NCSA is at the forefront of the most ambitious projects in multi-messenger astronomy that are already revolutionizing our understanding of the Universe. With NCSA now officially a member of the LIGO consortium, we expect to be having these types of announcements on a routine basis”

During the merger, which occurred approximately 1.4 billion years ago, a quantity of energy roughly equivalent to the mass of the sun was converted into gravitational waves. The detected signal comes from the last 27 orbits of the black holes before their merger. These colliding black holes were much less massive than those observed in the first detection, and because of their lighter mass stayed in the band of the detectors for a longer period – about one second. And, based on the arrival time of the signals—with the Livingston detector measuring the waves 1.1 milliseconds before the Hanford detector—the position of the source in the sky can be roughly determined.

Advanced LIGO’s next data-taking run will begin this fall. By then, further improvements in detector sensitivity are expected to allow LIGO to reach as much as 1.5 to 2 times more of the volume of the universe. The Virgo detector is expected to join in the latter half of the upcoming observing run.

“Gravitational wave astrophysics will enter a new phase during the second observing run” says Eliu Huerta, head of the relativity group at NCSA and leader of the 18-member NCSA LIGO team at Illinois. “Given the detection rate during the first observing run last year, we expect to experience a swift transition from the first detections phase to the astrophysics phase, when we will be able to make strong inferences about the distribution of masses and angular momenta of black holes and neutron stars, and possibly detect unexpected events. The work we are doing at NCSA on gravitational wave source modeling and data analysis will provide key insights.”

Stuart Shapiro, a professor of physics and astronomy at Illinois, says the first detection of gravitational waves “told us that binary black holes exist, that their formation is consistent with stellar population models, that they merge and generate gravitational waves in accord with general relativity, and that spinning black hole remnants settle into the unique Kerr stationary state predicted by general relativity. This second detection confirms and thereby strengthens all of these conclusions.”

The LIGO Observatories are funded by the National Science Foundation (NSF), and were conceived, built, and are operated by Caltech and MIT. This recent discovery, accepted for publication in the journal Physical Review Letters, was made by the LIGO Scientific Collaboration (which includes the GEO Collaboration and the Australian Consortium for Interferometric Gravitational Astronomy) and the Virgo Collaboration using data from the two LIGO detectors. It is just the second of many discoveries in which NCSA will play a role.

Gabrielle Allen, an expert in the development of techniques for high performance and grid computing, notes that NCSA is building upon its long tradition of interdisciplinary research. Allen is associate director for Computational Research and Education at NCSA and professor of astronomy at Illinois.

“NCSA is bringing together expertise from several departments at Illinois in all aspects of gravitational wave astrophysics and large scale electromagnetic surveys under the umbrella of advanced cyberinfrastructure,” she explains.