Assistant Professors Verena Martinez Outschoorn and Liang Yang of the Department of Physics at the University of Illinois at Urbana-Champaign have each been selected for 2017 NSF CAREER Awards. The Faculty Early Career Development (CAREER) Award of the National Science Foundation is conferred annually in support of junior faculty who exemplify the role of teacher-scholars by integrating outstanding research with excellent education. Receipt of this honor also reflects great promise for a lifetime of leadership within recipients’ respective fields. 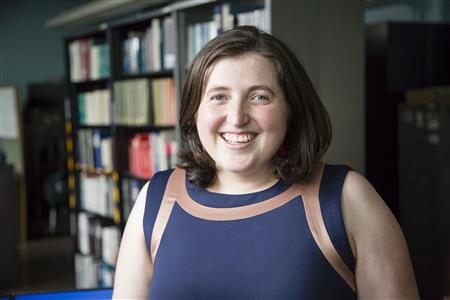 Assistant Professor Verena Martinez Outschoorn. Photo by L. Brian Stauffer, University of Illinois at Urbana-Champaign.
Martinez Outschoorn is a member of the ATLAS experiment at the Large Hadron Collider at CERN in Switzerland. She will use the 5-year grant to develop and implement new analytical tools to search for exotic Higgs boson decay modes, which ultimately could reveal new physics beyond the standard model (SM) and could shed light on the nature of dark matter. She and her group are also collaborating with ATLAS colleagues in the development of new electronics upgrades to the experiment that would allow for the effective triggering and recording of extremely rare and difficult-to-detect Higgs events.

Martinez Outschoorn is additionally developing an outreach program that enlists undergraduate and graduate student volunteers from Physics Illinois to share the excitement of physics with elementary and middle-school students, grades 4 through 8. The project brings concepts of particle physics into school classrooms in an interactive way and provides opportunities for young students to interact with physicists at work, both locally and at CERN. 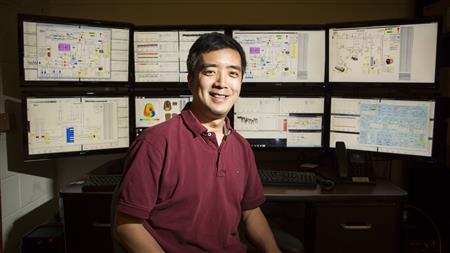 Yang will use his CAREER Award to develop novel analysis techniques for investigations of neutrinos, ubiquitous yet mysterious particles. Yang is co-spokesperson of the Enriched Xenon Observatory (EXO-200) experiment, currently in its Phase-II data taking. By searching for neutrinoless double beta decay, an exotic nuclear process, the EXO-200 collaborators hope to shed light on fundamental properties of neutrinos, including whether neutrinos are Majorana particles, i.e., their own anti-particles. A Majorana neutrino coupled with charge-parity (CP) violation could generate physical mechanisms responsible for the matter- antimatter asymmetry in the Universe.

The search for neutrinoless double beta decay will also shed light on the neutrino mass generation mechanism and put limits on the absolute scale of neutrino mass. Yang’s group at the U. of I. led the upgrade of the EXO-200 front-end electronics system, enhancing the detector’s energy resolution. He and Prof. Michelle Dolinski at Drexel University are currently overseeing the 3-year Phase-II data taking.

Yang plans to offer several EXO-200-centered research projects for undergraduate and graduate students at the U. of I. He is additionally developing an educational program to strengthen science education at the middle-school level, working in tangent with the U. of I. College of Education. He plans to organize workshops for middle-school teachers that will offer advanced training in hands-on activities for physical-science teaching, in accordance with New Generation Science Standards. Yang will also work with undergraduate student volunteers to improve outreach programs to middle school students.

Yang received his bachelor's degree in physics from Yale University in 1999. He received his master's (2003) and doctoral degrees (2006) in physics from Harvard University. He worked as a research associate at SLAC National Accelerator Laboratory from 2007 to 2011. He joined the faculty at Physics Illinois in 2012.

These CAREER grants are supported by NSF’s Division of Physics.

Kevin Pitts of the University of Illinois has been named chief research officer at Fermilab National Accelerator Laboratory beginning March 1. His focus will be on oversight for the international Deep Underground Neutrino Experiment, including advancing scientific excellence across the laboratory through strong communication, collaboration and coordination with the Department of Energy and other partners. He joins the laboratory as it prepares to usher in a new era of science and innovation in particle physics research and discovery. Pitts joins Fermilab after 22 years with the University of Illinois where he was most recently the vice provost for undergraduate education and a professor of physics in the Grainger College of Engineering. He has a long history working on experiments at Fermilab, including participation in the discovery of the top quark in 1995.  Additionally, he has been serving on the Long Baseline Neutrino Committee since 2016.

Illinois Physics Senior Academic Advisor Merissa Milton has been selected for the University of Illinois 2021 Campus Award for Excellence in Undergraduate Advising.

Recipients of this award are recognized for their excellence in and innovative approaches to undergraduate advising, and for having had a major impact on undergraduate students and their intellectual development through sustained academic advising relationships. The award, part of the Campus Awards for Excellence in Instruction program, will be presented to Milton at the annual Celebration of Teaching Excellence in May.

SABR is pleased to announce the 2021 recipients of the Henry Chadwick Award, established to honor the game’s great researchers — historians, statisticians, annalists, and archivists — for their invaluable contributions to making baseball the game that links America’s present with its past.

Alan Nathan (1946 – ) has been a professor of physics at the University of Illinois since 1977, with a specialty in experimental nuclear/particle physics. Now a professor emeritus, Nathan has spent the past quarter-century creating a body of knowledge around the physics of baseball. His extensive research and numerous articles, in particular on the collision between the bat and ball and the flight of the baseball, has dramatically expanded our quantitative understanding and visualization of baseball’s most fundamental interactions. Beyond the physical interactions themselves, Nathan’s research has examined their implications, from how a batter’s swing might be optimized to the insights extractable out of the data explosion from ballpark-installed technologies.

The American Institute for Medical and Biological Engineering (AIMBE) has announced the election of University of Illinois Professor of Bioengineering and Bliss Faculty Scholar Sergei Maslov, to its College of Fellows. Maslov holds an affiliate appointment at Illinois Physics and is a member of the Carle R. Woese Institute for Genomic Biology on the Urbana campus.
Maslov was nominated, reviewed, and elected by peers and members of the College of Fellows for his contributions to computational biology including microbiome dynamics, microbial and viral ecology, genomics, and studies of complex biological networks.