Neutron stars may hold an answer to neutron puzzle on Earth 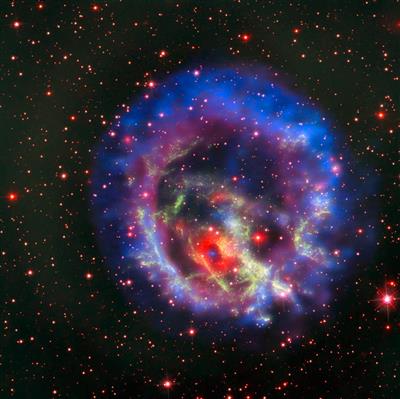 X-ray image superimposed on optical image. X-ray courtesy of NASA/CXC/ESO/F.Vogt et al; Optical courtesy of ESO/VLT/MUSE & NASA/STScI
According to University of Illinois physicist Douglas H. Beck, "Neutrons play some unusual roles in our world.  Free neutrons decay in about 900 s but, bound in nuclei, they are stable and make up somewhat more than half the mass of the visible universe."

In nuclei, the strong force provides the binding that overcomes the weak-interaction-decay of the free neutron, forming nuclei that have of order 102 neutrons.  Neutron stars, containing some 1057 neutrons, form when the gravitational collapse of a supernova is stopped by the strong interaction. In this situation, the strong interaction is repulsive and balances the extreme gravitational forces associated with having a solar mass compressed into a city-sized object.

But exactly how long do free neutrons live?  According to Beck, this question has been remarkably elusive to answer. "In fact, at the moment we seem to have two different answers," says Beck.

Scientists use two different experimental methods to determine the value of τ, the neutron lifetime. Experiments that measure the products of neutron decay—protons, electrons, and neutrinos—tend to predict a longer lifetime than do experiments where the number of neutrons at a specific starting time and ending time are simply compared.  In fact, despite intense effort on both fronts in recent years, the value of τ determined in the two types of experiments differs by about 8 s, with uncertainties of about 2 s.  As experiments have gotten more and more precise, the discrepancy could indicate new physics, not just experimental error. Physicists care, because they must know the precise neutron lifetime to test various cosmological models of the universe's evolution.

In January, theorists Bartosz Fornal and Ben Grinstein at UC San Diego posited that the difference could be explained by an "invisible" decay missed by the decay-product experiments; namely, that some 1% of the time, neutrons decay to dark matter particles that go undetected. Remarkably, the stability of ordinary nuclei does not completely rule out such a possibility.

This idea of a new decay process is appealing to physicists, because it could account for the dark matter present in the universe. While the existence of dark matter, having gravitational but not ordinary electromagnetic, strong or weak interactions, is beyond dispute, its origin and composition is unknown. That dark matter could be "hiding in plain sight" in terrestrial neutron decay experiments sparked intense interest by physicists and a number of stories in the popular press earlier this year.

However, as shown in a paper by Gordon Baym, Doug Beck, Peter Geltenbort (ILL, France) and Jessie Shelton, published in Physical Review Letters, the physical properties of observed neutron stars effectively rule out the possible decay of neutrons to dark matter particles.[*]

The physics argument has two pieces.  Neutrons have a spin of ½ h-bar, i.e., they are fermions, and to conserve angular momentum, at least one of the possible decay products would also have to be a fermion.  Even though the decay of neutrons to dark-matter particles would be relatively rare in the Fornal–Grinstein picture, over the life of a neutron star, the neutrons and dark fermions would come to equilibrium, leaving two fermion species in place of the one that was originally there.  The so-called degeneracy pressure that prevents two fermions from being in the same place at the same time would thus be reduced.

Furthermore, the interactions between dark particles themselves are expected to be very weak.  The strong repulsion of neutrons required to withstand the intense gravitational pressure inherent in neutron stars would therefore also be substantially reduced. The authors conclude that the maximum mass of a hybrid neutron–dark-matter star would be only about 0.7 times the mass of the sun, contradicting the observations of numerous neutron stars having masses up to about 2 solar masses.

Jessie Shelton points out, however, that if the dark fermions were to have some sort of exotic self- interactions, it would be possible to have both neutron decays and neutron stars of the observed 2 solar masses, because these interactions would provide the missing component of pressure to hold up the neutron star.

"If we did discover exotic neutron decays, then we would in the same stroke also learn something amazing about the dark side of our universe—the survival of massive neutron stars would then immediately tell us that there isn’t just one dark matter particle, but a whole set of dark particles with their own dark forces!" said Shelton.

This material was supported in part by National Science Foundation under Grants 1506416 and 1714042, and US Department of Energy Early Career Grant DE-SC0017840.  Any opinions, findings, and conclusions or recommendations expressed in this material are those of the authors and do not necessarily reflect the views of the National Science Foundation or the US Department of Energy.

[*] The development of this idea was not unique.  A Physical Review Letters companion paper by David McKee (Pitt), Anne Nelson (UWash), Sanjay Reddy (UWash) and Dake Zhou (UWash), together with one by Theo Motta (Adelaide), Pierre Guichon (CEA, France) and Tony Thomas (Adelaide) published separately—both describing the same physics ideas—appeared on the arXiv within a few days of one another.