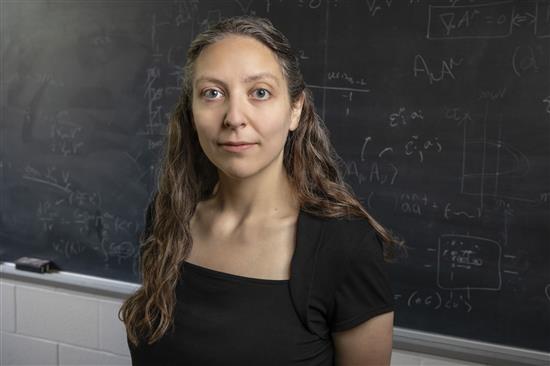 Illinois Physics Professor Julia 'Jessie' Shelton
Physics Professor Julia “Jessie” Shelton of the University of Illinois at Urbana-Champaign has been awarded the 2019 Presidential Early Career Award for Scientists and Engineers (PECASE), the highest honor bestowed by the US government on scientists and engineers in the early stages of their independent research careers.

Shelton is a theorist whose work spans a broad range of topics in particle physics beyond the standard model. She is especially interested in elucidating the nature of dark matter and in searching for unusual footprints of new physics at the Large Hadron Collider (LHC) at CERN in Switzerland. Her recent work focuses on possible decays of the Higgs boson to new particles, strategies to detect particles produced at the LHC that travel macroscopic distances before decaying, and the cosmological origin stories of "hidden sector" dark matter, i.e., dark matter that interacts far more strongly with other dark particles than it does with us.

At Illinois Physics, Shelton is known as an engaging teacher whose ability to explain complex physics concepts in elegant and concise language is coupled with great enthusiasm for public outreach efforts.

Shelton is a 2019 Center for Advanced Study Fellow at Illinois. She received an Early Career Award of the US Department of Energy in 2017. Since 2014, she has served as the theory convener for the Large Hadron Collider Higgs Cross-Section Working Group.

The PECASE awards, established by former-President Clinton in 1996, are coordinated by the Office of Science and Technology Policy within the Executive Office of the President of the United States. PECASE awardees are selected for their pursuit of innovative research at the frontiers of science and technology and for their commitment to community service as demonstrated through scientific leadership, public education, or community outreach.