Shelton and Adshead are the department’s inaugural class of Compton Fellows. The faculty will retain the title designation for as long as they hold faculty appointments at Illinois Physics. This named appointment comes with a one-time spending allowance to support ongoing research. 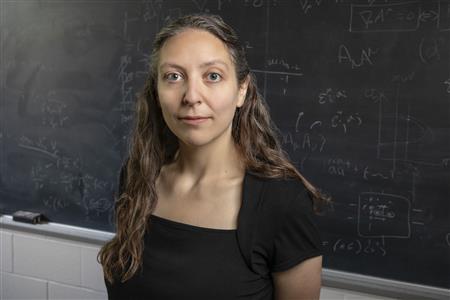 Physics Professor Julie 'Jessie' Shelton
Shelton is a theoretical particle physicist studying a broad range of topics in physics beyond the standard model. She is especially interested in elucidating the nature of dark matter and in searching for unusual footprints of new physics at the Large Hadron Collider (LHC) at CERN in Switzerland. Shelton’s recent work focuses on the Higgs boson as a window onto new physics, strategies to detect particles produced at the LHC that travel macroscopic distances before decaying, and the cosmological origin stories of “hidden sector” dark matter—dark matter that interacts far more strongly with other dark particles than it does with us. Shelton looks for clues to the origin of dark matter in systems ranging from terrestrial detectors to neutron stars and black holes.

El-Khadra remarks, “Jessie is a true leader who continues to create new ideas and research directions. One of her strengths is her ability to bring people from different fields together for creative new research of high and lasting impact. Her recent work on dark matter phenomenology is a prime example of interdisciplinary research that brings in ideas from cosmology, astrophysics, and nuclear physics to develop new models and new signatures for dark matter detection.”

Shelton is the recipient of numerous honors. She was selected for a 2019 Presidential Early Career Award for Scientists and Engineers (PECASE). She is a 2019 Center for Advanced Study Fellow at Illinois. She received the Early Career Award of the US Department of Energy in 2017.

Shelton serves her scientific community through various outreach and service efforts. Among these, two highlights: since 2014, she has served as the theory convener for the Exotic Decays group within the Large Hadron Collider Higgs Cross-Section Working Group; and since 2016, Shelton has been a member of the American Physical Society’s National Mentoring Community, which aims to provide better mentorship for physics undergraduate students from underrepresented groups. 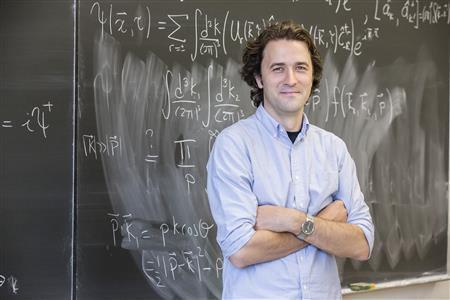 Physics Professor Peter Adshead
Adshead is a theoretical astrophysicist and cosmologist whose research covers a broad range of topics in the very early universe. The extremely hot and dense conditions of the very early universe leaves signatures that can be detected from Earth today. Adshead studies the physics of inflation, a period of accelerated expansion in the very early universe, and its signature in the cosmic microwave background (CMB) radiation; the reheating phase transition that marks the end of inflation and the beginning of the Big Bang; and the theoretical connections that can be drawn between high-energy particle physics, including physics beyond the standard model, and what we know about the composition and history of the early universe. Adshead has recently published work elucidating CMB constraints on gravitational waves, as well as an investigation of early universe light relics such as cosmic neutrinos.

Adshead is a member of the CMB-S4 (Cosmic Microwave Background Experiment–Stage 4) collaboration, which will deploy highly sensitive superconducting cameras at the South Pole, Chile, and other sites to further test general relativity on large scales, to elucidate the interactions of matter during cosmic inflation, and to shed new light on dark matter.

Illinois Physics and Astronomy Emeritus and Research Professor Stu Shapiro is a pioneer in theoretical astrophysics and numerical relativity.

Shapiro comments, “Peter is an outstanding cosmologist who comes to the field with a strong background in field theory and a deep knowledge of inflation, the most popular model of early universe expansion. It is great to have someone with his interests and expertise around to probe this developing theory, especially at a time when inflation is undergoing continual reexamination and reassessment.”

The late W. Dale Compton received his PhD in experimental condensed matter physics from the University of Illinois in 1955. He went on to have a long and distinguished career, working in government, industry, and academia. He was recognized as a national leader in engineering and technology. Compton worked as a physicist for the U.S. Navy from 1951-61. He joined the faculty of Illinois Physics in 1961 as an associate professor and was promoted to full professor in 1964. In 1965, he was appointed the director of the Coordinated Sciences Laboratory at Illinois. In 1970, he joined Ford Motor Co. in 1970 as the director of the Chemical and Physical Sciences Laboratory. From 1973 to 1986, he was vice president of research for Ford Motor Co. He joined the staff at the National Academy of Engineering in 1986.

In 1988, he was appointed the Lillian M. Gilbreth Distinguished Professor of Industrial Engineering at Purdue University. Over the course of his career, Compton served on countless boards and committees and championed greater collaboration between industry and academia. One example of his far-reaching influence are the National Science Foundation funded research centers at universities across the nation—he developed and initiated the program that established these. He contributed to condensed matter physics, engineering physics, manufacturing, technology, and the application of systems engineering tools in the health care sector, among many other accomplishments. Compton is a former member of the Physics Advisory Board at Illinois Physics.

The late Jeanne C. Compton received her master’s degree in social work from the University of Illinois in 1952. She went on to work as a social worker in both Champaign and Washington D.C.. She was an active member of her community wherever the couple lived, volunteering with many organizations, including The Monday Club and the Lafayette Symphony Guild. Together with her husband Dale, she established an endowment for Artistic Excellence with Purdue Convocations. The couple also donated a large collection of Native American art to the Spurlock Museum of World Cultures at Illinois, as they were ardent supporters of both scientific and artistic pursuits.