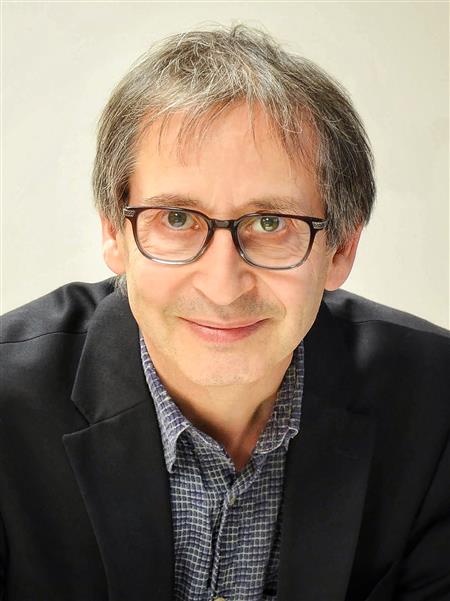 The citation reads, “For profound contributions to the fields of dynamical pattern formation, superconductivity, and fluid turbulence, together with creative developments and exposition of the theory of the renormalization group.”

Goldenfeld is a theoretical condensed matter physicist who has demonstrated deep insight into the mechanisms underlying pattern formation in systems far from equilibrium. Goldenfeld’s interests in emergent and collective phenomena extend well beyond condensed matter physics, and over the course of his career, his work identifying the universality of pattern-formation dynamics has had far-reaching impact on a broad range of scientific fields.

Goldenfeld was a colleague of the late physicist Leo Kadanoff, for whom the prize is named.

Goldenfeld comments, “Leo Kadanoff was my main scientific inspiration, one of my mentors, a collaborator, and friend. In my research, I find myself consciously trying to emulate his style of discovery, through my work on renormalization group, superconductivity, and of course turbulence. It is very thrilling to be honored with this award in his name.”

With Kadanoff, Goldenfeld authored a 1999 paper that appeared in the journal Science, titled “Simple Lessons from Complexity.” In it, the authors explain in terms of statistical mechanics how complex systems can obey simple laws, while simple systems can produce complex structures. This concept has been foundational to Goldenfeld’s body of research across a wide-range of disciplines.

“Leo Kadanoff not only pioneered the theory of scaling phenomena in phase transitions, but was a pivotal influence on the community of statistical physicists who strove to apply their ideas broadly in non-traditional areas of science,” Goldenfeld adds.

Goldenfeld and his group have successfully developed simple mathematical models to describe complex emergent patterns in the microstructures of materials, the flow of fluids and the transition to turbulence, the dynamics of geological formations, and the spatial structure of ecosystems.

Goldenfeld’s early work in theoretical soft condensed matter physics describing a scaling law of pattern formation in fluid convection was recently invoked to explain the experimental observation of the formation of striped patterns of charge order in a high temperature superconductor, and led to a publication with Professor Peter Abbamonte that appeared recently in Science Advances.

“It is no surprise that Leo Kadanoff always used to say that he did his best work at Illinois,” notes Goldenfeld. “The ‘Urbana style’ of collaborative research brings out the best in scientists. Indeed, one of Leo’s most famous review articles on phase transitions was written with all the students in his graduate level class. My own work would not have been successful without the fantastic students and postdocs who entrusted me with their scientific education, as well as my brilliant and supportive colleagues at Illinois, to all of whom I owe a debt of gratitude.”

At Illinois, Goldenfeld holds a Swanlund Endowed Chair and a Center for Advanced Study Professorship. He is the Director of the NASA Astrobiology Institute for Universal Biology at the Carl R. Woese Institute for Genomic Biology (IGB). Goldenfeld additionally leads the Biocomplexity Theme at the IGB. He is also an active member of the Institute for Condensed Matter Theory and of the Center for the Physics of Living Cells, a National Science Foundation Physics Frontiers Center, both housed in the Department of Physics.

A dedicated teacher, Goldenfeld authored one of the standard physics graduate textbooks in statistical mechanics. His graduate-level lecture courses are among the most popular offered by Illinois Physics.

Goldenfeld is founder of NumeriX, an award-winning private company that specializes in high-performance numerical software for derivative risk management in financial markets.

Goldenfeld is the recipient of numerous honors. He is an Alfred P. Sloan Foundation Fellow and a University Scholar of the University of Illinois. He is a recipient of the Xerox Award for Faculty Research, the Tau Beta Pi Daniel C. Drucker Eminent Faculty Award of The Grainger College of Engineering, and of the Nordsieck Award for Excellence in Physics Teaching presented by Illinois Physics. He has been a member of the editorial boards of a number of journals, including Physical Biology, The Philosophical Transactions of the Royal Society, and the International Journal of Theoretical and Applied Finance.

The prize will be presented to Goldenfeld at the 2020 APS March Meeting. In conjunction with winning the prize, Goldenfeld has been invited to give a talk at the March meeting.

The APS Leo P. Kadanoff Prize honors the memory and celebrates the remarkable legacy of Leo Kadanoff, who served as APS president from 2007 to 2008. Kadanoff, who had an enormous impact on statistical and nonlinear physics, was himself the recipient of many of the field’s most prestigious awards. His accessible approach to the renormalization group has been emulated in an array of fields and his lectures and popular writings have inspired a generation of scientists. Kadanoff was a faculty member at Illinois Physics from 1961 to 1969. He later held appointments at Brown University and the University of Chicago.