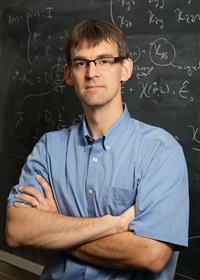 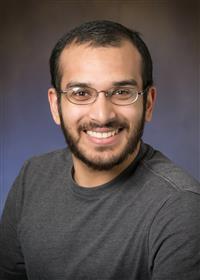 Illinois Physics graduate student Ali Husain
Scientists have extensively studied metals in order to characterize their physical properties at the microscopic level. Some metals, such as gold and silver, exhibit predictable patterns in which quantum interactions play only a very minor role. However, in the last few decades, certain metals, such as copper-oxide superconductors, have been shown to exhibit highly anomalous behavior where strong quantum interactions manifest up to very high temperature, earning them the name “strange metals.”

In normal metals like gold and silver, the resistance—the measure of how strongly the metal opposes the flow of electrical current—is closely tied to how far electrons can travel before hitting another object and scattering. The warmer the metal is, the shorter distance electrons can travel without scattering, and the higher the resistance becomes. Eventually, at very high temperatures, electrons scatter every time they encounter another electron and the resistivity saturates and cannot increase any further.

Strange metals do not follow this pattern. The resistance of these metals increases linearly with temperature and never saturates, even at temperatures close to the melting point of the metal. This lack of saturation implies that strange metal electrons scatter multiple times well before they encounter another electron due to some unexplained strong quantum interactions. Almost paradoxically, strange metal electrons often stop scattering altogether at lower temperatures and instead become perfect conductors (i.e., superconductors).

To study the strong quantum interactions between electrons in a strange metal, Illinois Physics graduate student Ali Husain and co-workers in Professor Peter Abbamonte’s group at Illinois Physics used their newly developed technique of Momentum-resolved Electron Energy-loss Spectroscopy (M-EELS). This technique measures how charge in a material propagates in space and time, much akin to how disturbances in water can be measured by throwing a pebble in a pond and observing the resulting ripples.

In normal metals, the quantum interactions are “weak” and result in charge freely moving in space as oscillating waves (see image a below), just as in the familiar case of water.  However, using M-EELS the Abbamonte group surprisingly found that charge in the strange metal neither propagates in space nor oscillates, implying these charge disturbances are localized in both space and time (see image b below).

Figure 1: (a) Charge disturbance in a normal metal freely moving as a wave with well-defined oscillations. (b) Charge disturbance in a strange metal. Unlike ordinary metals, here the disturbance barely propagates and lacks oscillations, implying the charge response of a strange metal is localized in both space and time. Credit: Ali Husain, Illinois Physics
To understand whether this localized behavior is a peculiarity of a specific material composition, the group varied both the number of electrons (i.e., “doping”) as well as the temperature. Surprisingly, the localized charge response is unaffected by temperature and changing the number of electrons within a curious fan-shaped region, but the energy content drastically changes outside of this fan.

“It is astonishing that by smoothly changing the thermal energy of strange metals by tiny amounts, we see the charge disturbances change on energy scales nearly five hundred times larger. Usually that is only seen in abrupt phase transitions, like when water freezes into ice,” notes lead author Ali Husain.

Explaining the M-EELS results on strange metals is still an open question and “although it looks like a simple phenomenon, there are no convincing theories about why these metals behave this way,” comments Abbamonte. “It is possible that strange metals are not unique in their properties and instead are representative of a general category of materials. It would be interesting to identify other materials that share the same characteristics.”

Illinois Physics Professor Philip Phillips is a noted condensed matter theorist who is working to explicate these experimental results. He comments, “This experiment shows fundamentally that electrons or no particle-like excitation are the charge carriers in the strange metal.  Hence, progress on this problem lies outside the standard tenets of model building based on particles and local interactions. It is work along these lines that our group has been pursuing.”