The Einstein Toolkit ecosystem: enabling fundamental research in the era of multi-messenger astrophysics Illinois Physics Professor Helvi Witek
The National Science Foundation (NSF) has awarded over $680,000 to the University of Illinois at Urbana-Champaign to further develop the Einstein Toolkit. The project will improve the cyberinfrastructure framework used by Einstein Toolkit, an accessible community-driven open-source ecosystem that provides computational tools to advance research in relativistic astrophysics and gravitational physics.

“The Einstein Toolkit has been hugely successful in enabling scientists to study the most energetic processes in the universe, such as black hole and neutron star collisions, as well as supernovae,” says Haas. “Being a genuinely collaborative effort from the very beginning, the Einstein Toolkit has allowed generations of young scientists to use and develop state-of-the-art supercomputer code. With this new grant, we will prepare the Einstein Toolkit for future computational challenges, to run on the world's most powerful supercomputers, and to study more complex physical systems than ever before.”

“The Einstein Toolkit is an organic, widely used cyberinfrastructure that has been designed by the scientific community for the community,” adds Witek. “As such, the toolkit’s development is driven by scientific progress and innovation, and will advance our key goal of training the next generation of scientists.

Witek brings unique expertise to the Einstein Toolkit project. Illinois Physics is home to one of the world’s leading groups working in computational astrophysics, numerical relativity, and gravity. Witek joined this team at the start of 2020, having already lead the field of numerical relativity to new frontiers: she developed the tools that enable novel strong-field tests of gravity, the hunt for dark matter particles using black holes, and the search for compact binaries with LIGO (Laser Interferometer Gravitational Wave Observatory) and with the upcoming NASA-ESA mission, LISA (Laser Interferometer Space Antenna, a planned space-based gravitational wave detector). Witek is co-chair of LISA’s Waveform Working Group.

“It’s important that young scientists and peers alike will benefit from these exciting new developments in fundamental physics. For example, we are now in a position to address long-standing puzzles in modern physics that range from astrophysical phenomena in the dark-matter quest to nuclear matter under extreme condition in the highly nonlinear regime of gravity that unfolds during the collision of black holes or neutron stars. The Einstein Toolkit, in tandem with research developments facilitated by our team’s NSF CSSI grant, will play a vital role in exploring these exciting phenomena.”

The four-year Einstein Toolkit development grant is part of a $2.3 million collaborative effort among the University of Illinois at Urbana-Champaign, Georgia Institute of Technology, Rochester Institute of Technology, Louisiana State University, and West Virginia University, awarded through NSF’s Cyberinfrastructure for Sustained Scientific Innovations (CSSI) program. The research team will address current and future challenges in gravitational-wave-source modeling, improve the scalability of the code base, and support an expanded science and user community. The project has grown out of collaborative research funded by a previous NSF grant supporting community planning for scalable cyberinfrastructure for multi-messenger astrophysics, which was awarded to Allen in 2018. 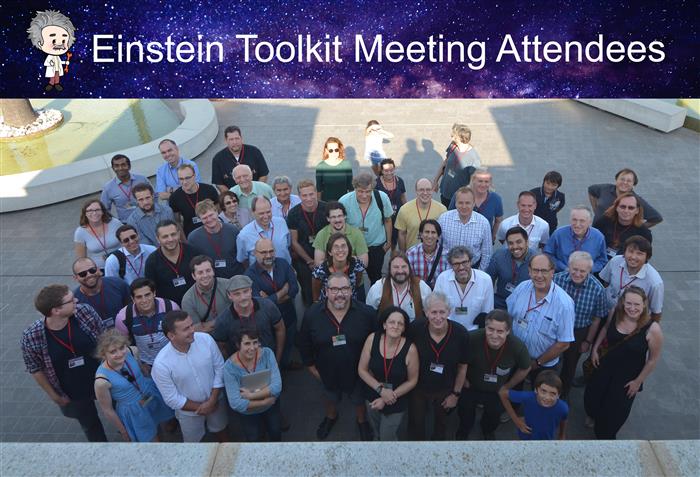 2017 Einstein Toolkit Meeting attendees, in Palma de Mallorca, Spain
The Einstein Toolkit is used by many groups (including the Illinois Physics Relativity Group and NCSA's Gravity Group), spanning all continents except Antarctica. It is developed and supported in a distributed, collaborative manner. Its focus on community-based development has resulted in a large user base—to date, 282 registered users from 194 different groups and 40 countries.

“One focus of the Einstein Toolkit is to develop and nurture a future generation of researchers, and we want to be intentional about increasing the diversity of these researchers,” asserts Allen. “The Einstein Toolkit is an open-source framework having ready-to-run examples and tutorials, a help desk, and holding regular workshops and summer schools. It is accessible to all students wherever they are studying, whether in the U.S. or anywhere in the world.”

NCSA Director William Gropp adds, “It is great to see this support for the Einstein Toolkit—building on NCSA’s long history of creating and supporting software that accelerates the use of computing by computational scientists.”