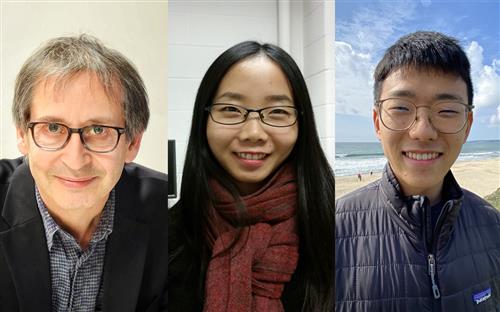 From left, Swanlund Professor of Physics Nigel Goldenfeld, graduate student Chi Xue, and former undergraduate student Zhiru Liu.
In biology, phylogenetic trees represent the evolutionary history and diversification of species – the “family tree” of Life. Phylogenetic trees not only describe the evolution of a group of organisms but can also be constructed from the organisms within a particular environment or ecosystem, such as the human microbiome. In this way, they can describe how this ecosystem evolved and what its functional capabilities might be.

Now, researchers at Illinois have presented a new analysis of the patterns generated by phylogenetic trees, suggesting that they reflect previously hypothesized connections between evolution and ecology. The study was led by Swanlund Professor of Physics Nigel Goldenfeld (BCXT leader/GNDP), with team members graduate student Chi Xue and former undergraduate student Zhiru Liu, now at Stanford University. Their findings were published in a recent article in the journal Proceedings of the National Academy of Science, titled “Scale-invariant topology and bursty branching of evolutionary trees emerge from niche construction.”

The most familiar phylogenetic tree of all life on Earth uses genes from the essential cellular ribosomal machinery to represent species. By comparing the differences between the molecular sequences of the same genes on different organisms, researchers can deduce which organisms were descended from others. This idea led to the mapping-out of the evolutionary history of life on Earth and the discovery of the third domain of life by Carl R. Woese and collaborators in 1977.

Real phylogenetic trees are complex branching structures, reflecting the pattern of speciation as new mutants emerge from a species. The branching structures are complex, but it is possible to characterize them in terms of how balanced they are and other statistical features reflecting the topology of the tree. The simplest characterization is to look at each branching node on the tree: does it split into two branches of exactly the same length or are the branches unequal in length? The former is said to be balanced while the latter unbalanced.

Despite the complexity of trees, there is a consistent mathematical pattern in topological structure across evolutionary time, one that is self-similar or fractal in nature. Using a minimal representation of evolution, the researchers showed how this fractal structure reflects the indelible imprint of the interplay between ecological and evolutionary processes. Minimal models of nature do not aim to be overly realistic but instead are constructed to capture the most important ingredients of a process in a way that makes simulation and mathematical analysis easy.

“Thus, it seemed reasonable to try this approach to describe self-similarity in time too” Goldenfeld comments.

“We set off to study the topological property of the phylogenetic tree and ended up with an extra 'fruit of explanation” for the tree's special character,'” Xue notes. 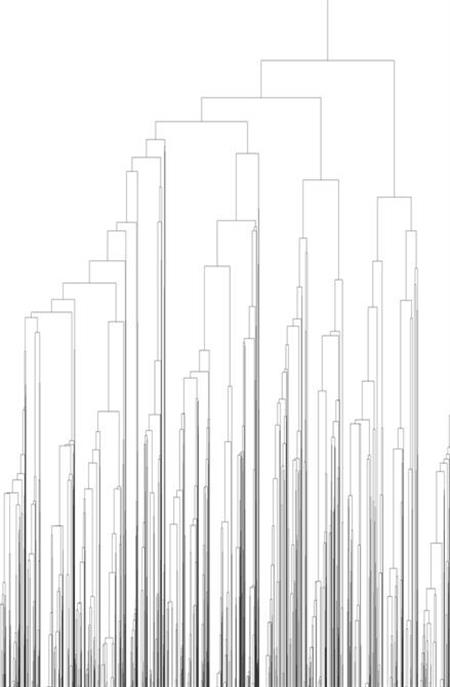 A simulated phylogenetic tree. Time runs from top to bottom, and nodes represent species, lines represent the mutations in DNA associated with the gene that is being studied. Bifurcations signify speciation events. This tree has a complex structure but is also fractal in a topological sense. Image courtesy of Goldenfeld, Xue, Liu.
The study revolved around a concept in evolutionary ecology known as niche construction, first proposed about 40 years ago. In niche construction, organisms modify their environment, thereby creating new ecological niches in the ecosystem and changing the environment. In turn, these new niches affect the overall evolutionary trajectory of the organisms that share the environment. The end result is that evolution and the environment are coupled closely together. The idea that evolution is not occurring on a purely static environmental background is controversial, despite being intuitively appealing. Their findings add to the existing body of work by identifying the long term effects of niche construction in a way that can be detected by modern genomics and phylogenetic tree construction.

“In our model, we relate the niche positively to the speciation probability, in the sense that an organism with a large niche can likely diversify successfully,” Xue adds. “During the phylogenetic tree evolution, when two daughter nodes emerge from their parent, they get their niches partially from inheriting and partially from construction.”

Researchers showed that species which run out of niche space can no longer branch or speciate. Mathematically, this was represented as a so-called absorbing boundary condition on the node representing this species.

“Its sister node likely still diversifies as long as that niche is still positive, but the two sister nodes are no longer symmetric and the tree becomes unbalanced,” Xue explained. “We demonstrated that the absorbing boundary is crucial to generate the fractal structure of the tree and that the niche construction guarantees that some nodes will reach the boundary.”

The researchers used a simplified model of niche construction and were able to recapitulate the fractal scaling in the tree topology. Their calculations used methods adopted from a completely different field of science: the physics of phase transitions. An example of a phase transition is when a material such as iron becomes magnetic as its temperature is lowered. The magnetism emerges gradually once the temperature falls below a critical value.

Goldenfeld explained how this unusual analogy works: “Very close to this critical temperature, a magnet also is fractal or self-similar: it is structured into nested regions of magnetic and non-magnetic domains. This nesting or self-similar structure in space is reminiscent of the nesting or self-similar structure of bifurcating tree branches in time.” Using computer simulations and the mathematics of phase transitions, the research team was able to demonstrate how the fractal scaling of the tree topology emerges. 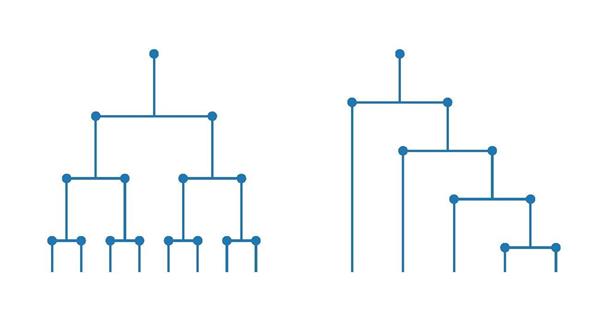 Left: A balanced phylogenetic tree. Right: A maximally unbalanced phylogenetic tree. In both panels time runs from top to bottom and the nodes represent species. The lines connecting them represent the number of mutations in DNA associated with the gene that is being studied. Image courtesy of Goldenfeld, Xue, Liu.
“Our model has a small number of components and assumes simple mathematical form and yet, it generates the power-law scaling with the right exponent that is observed in actual biological data,” Xue explained. “It's simply amazing to see how much a minimal model can do.”

“We were able to reproduce not only the power-law behavior but also a non-trivial exponent that’s very close to reality,” Liu explains. “In other words, the simulated trees are not only scale-invariant but also realistic in a way.

In addition to describing the fractal topology of phylogenetic trees, the model also accounted for the patterns of evolutionary clades previously documented to occur in microbial communities by Professor of Plant Biology James O’Dwyer (BCXT), an ecologist trained in theoretical physics like Goldenfeld.

“It was especially gratifying to be able to gain some insight into James’ earlier discovery, using a conceptual toolkit that came from statistical physics,” Goldenfeld commented. “This work exemplifies the way in which powerful and unexpected results can arise from trans-disciplinary research, painstaking data analysis and minimal modeling.”

The presence of niche construction creates a significant footprint in the evolutionary trajectory that cannot be eliminated, even across long time scales. The idea that niche construction — which is based on a much shorter time scale — emerges as a long-term memory in phylogenetic trees may surprise some people. Indeed, Liu adds that this “scale-interference” is also a hallmark of phase transitions, where the spacing between atoms in a magnetic crystal on the scale of Angstroms can influence the material properties on the scale of centimeters.

“When I learned about the idea of scale-interference in Nigel’s physics class on phase transitions three years ago, I wasn’t expecting any of the following: joining his group, applying this idea and solving a biological problem,” says Liu. “Now I’m glad that I didn’t doze off during that lecture.”