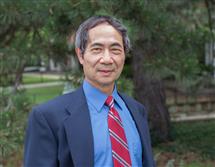 “Following their experimental confirmation in 2008, TIs have been widely studied in condensed-matter physics both experimentally and theoretically,” notes Hlevyack. “These materials, which are insulating in the bulk but conducting at the surface, possess topologically-protected surface states that are robust to disorder or impurities in the system.”

The few experiments thus far on TIs coupled to SCs have claimed amazing successes with strong, long-range superconducting order. However, such studies are questionable as the purported TIs are rigorously speaking metals, not insulators, due to heavy doping by nature of the sample fabrication process, which makes the sample conducting.

“This fact led us to question: ‘If a true TI is fabricated, does the TI/SC system still show strong, long-range superconducting order in both topological surface layers?’ This question is crucial for applications, which require a truly isolated topological superconducting sheet on the surface with no interfering bulk carriers,” Hlevyack explains.

To fabricate the insulating TI/SC systems, Hlevyack, Eckstein, and Chiang employed a novel “flip-chip” technique, preparing the systems using molecular beam epitaxy (MBE) and DC magnetron sputtering instruments at the Illinois Materials Research Laboratory. “In this technique, TI films (2-10 layers in thickness) are grown on graphene-terminated silicon carbide or sapphire substrates,” says Eckstein, “The thickness is precisely chosen during the growth, and for the bismuth antimony telluride films, the bismuth-to-antimony ratio is controlled so that all films are bulk insulating regardless of thickness. A polycrystalline niobium film is then sputter-deposited onto the TI films. Lastly, each sample is flipped over, glued onto a sample plate, and then topped with a cleave pin. A fresh TI surface is exposed by striking the cleave pin, which removes the substrate to reveal a TI film of a specific thickness predetermined by the growth on superconducting niobium.”

Eckstein comments, “The flip-chip method is a very powerful preparation technique. It overcomes many of the problems encountered when preparing TIs on niobium, adding greater flexibility in the choice of materials we can have in the system. Also, it allows one to fabricate relatively simple TI/SC systems—particularly those involving simple superconductors such as lead and niobium, which permits one to identify the fundamental physics more easily.”

These “flip-chip” samples were introduced into an ultrahigh-vacuum system and, upon cleavage, were probed by ultrahigh-resolution ARPES at the Institute for Solid State Physics, The University of Tokyo, in the lab of Professor Kozo Okazaki. Chiang and Hlevyack credit their international collaborators at The University of Tokyo for overseeing these main measurements.

Hlevyack stresses, “The project as designed was a very sophisticated, difficult problem. Not only is the preparation of these TI/SC systems very tricky but so are the ARPES  measurements themselves. Detecting superconducting features at such very small energy scales requires an ultrahigh-resolution, ultralow-temperature apparatus. The system used for this research at The University of Tokyo is arguably the best in the world. We are indebted to Professor Okazaki's group for their hard work and for the very nice collaboration.”

“Though we cannot dismiss the possibility of a tiny superconducting gap and thus a weak topological superconductor surface state in the bismuth antimony telluride system, these results are very profound, because they settle the question of whether TIs interfaced with niobium are robust topological superconductor candidates. Our work also underlines the limitations of employing the proximity effect in realizing topological superconductivity. We expect that further research in other TI/SC systems will be conducted to test the generality of our conclusions and to create further optimized TI/SC heterostructures, but for TIs on niobium, the picture seems very simple: No bulk states, then no strong superconducting order on the surface,” concludes Chiang.