In topological materials, electrons can display behaviour that is fundamentally different from that in ‘conventional’ matter, and the magnitude of many such "exotic" phenomena is directly proportional to an entity known as the Chern number. New experiments establish for the first time that the theoretically predicted maximum Chern number can be reached—and controlled—in a real material.

When the Royal Swedish Academy of Sciences awarded the Nobel Prize in Physics 2016 to David Thouless, Duncan Haldane and Michael Kosterlitz, they lauded the trio for having “opened the door on an unknown world where matter can assume strange states.” Far from being an oddity, the discoveries of topological phase transitions and topological phases of matter, to which the three theoreticians have contributed so crucially, has grown into one of the most active fields of research in condensed matter physics today. Topological materials hold  promise, for instance, for the development of novel types of electronic components and superconductors, and they harbour deep connections across areas of physics and mathematics. While new phenomena are discovered routinely, there are fundamental aspects yet to be settled.

One of those unsettled aspects is just how "strong" topological phenomena can be in a real material. Addressing that question, an international team of researchers led by Paul Scherrer Institute postdoctoral researcher Niels Schröter now provide an important benchmark. Writing in Science, the team reports experiments in which they observed that, in the topological semimetal palladium gallium (PdGa), one of the most common classifiers of topological phenomena, the Chern number, can reach the maximum value that is allowed in any metallic crystal. That this is possible in a real material has never been shown before. Moreover, the team has established ways to control the sign of the Chern number, which might bring new opportunities for exploring, and exploiting, topological phenomena.

Developed to the maximum

In theoretical works it had been predicted that in topological semimetals the Chern number cannot exceed a magnitude of four. As candidate systems displaying phenomena with such maximal Chern numbers, chiral crystals were proposed. These are materials whose lattice structures have a well-defined handedness, in the sense that they cannot transform into their mirror image by any combination of rotations and translations. Several candidate structures have been studied. A conclusive experimental observation of a Chern number of plus or minus four, however, remained elusive. 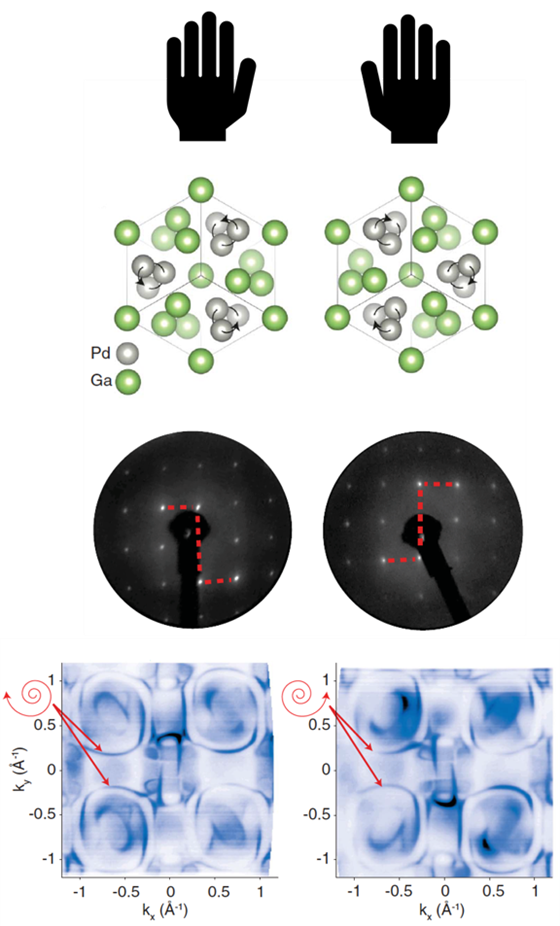 credit: Niels Schröter et al., Paul Scherrer Institute
Previous efforts have been hindered by two factors in particular. First, a prerequisite for realizing a maximal Chern number is the presence of spin-orbit coupling, and at least in some of the materials studied so far, that coupling is relatively low, making it difficult to resolve the splittings of interest. Second, preparing clean and flat surfaces of relevant crystals has been highly challenging, and as a consequence spectroscopic signatures tended to be washed out.

Schröter et al. have overcome both of these limitations by working with PdGa crystals. The material displays strong spin-orbit coupling, and well-established methods exist for producing immaculate surfaces. In addition, at the Advanced Resonant Spectroscopies (ADRESS) beamline of the Swiss Light Source at PSI, the team had unique capabilities at their disposal for high-resolution ARPES experiments and thus could resolve the predicted tell-tale spectroscopic patterns. In combination with further measurements at the Diamond Light Source (UK) and with dedicated ab initio calculations, these data revealed hard and fast signatures in the electronic structure of PdGa that left no doubt that the maximal Chern number has been realized.

A hand on the Chern number

The team went one step further, beyond the observation of a maximal Chern number. They showed that the chiral nature of the PdGa crystals offers a possibility to control the sign of that number as well. To demonstrate such control, the researchers grew samples that were either left- or right-handed. When they looked then at the electronic structures of the two enantiomers, they found that the chirality of the crystals is reflected in the chirality of the electronic wave function. Taken together, this means that in chiral semimetals, the handedness, which can be determined during crystal growth, can be used to control topological phenomena emerging from the behaviour of the electrons in the material.

This sort of control opens a trove of new experiments. For example, novel effects can be expected to arise at the interface between different enantiomers, one with Chern number +4 and the other one with -4. And there are real prospects for applications, too. Chiral topological semimetals can host fascinating phenomena such as quantized photocurrents. Intriguingly, PdGa is known for its catalytic properties, inviting the question about the role of topological phenomena in such processes.

Finally, the findings now obtained for PdGa emerge from electronic band properties that are shared by many other chiral compounds—meaning that the corner of the “unknown world where matter can assume strange states” into which Schröter and colleagues have now ventured is likely to have a lot more to offer.

This work was carried out in close collaboration with the group of Claudia Felser at the Max Planck Institute for Chemical Physics of Solids in Dresden (Germany), and with colleagues at the Swiss Federal Laboratories for Materials Science and Technology (EMPA), the  École Polytechnique Fédérale de Lausanne (EPFL), the Donostia International Physics Center in Donostia-San Sebastian and  IKERBASQUE Bilbao (Spain), the University of Oxford (UK), Diamond Light Source (UK), and the University of Illinois at Urbana-Champaign (US).