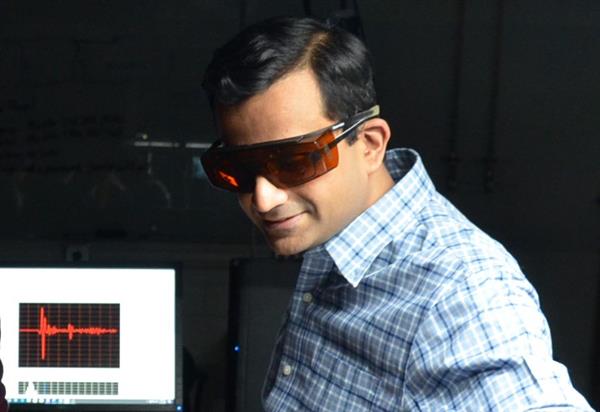 Illinois Physics Professor Fahad Mahmood in his lab at the Materials Research Laboratory. Photo by Siv Schwink, Illinois Physics
Many properties of metals can remarkably be understood in terms of “free” electrons, even though electrons interact with each other through a Coulomb force, which can be both large and long ranged. It turns out that these interactions collectively result in the emergence of “quasiparticles” whose behavior is very similar to that of free, non-interacting electrons. This description forms the basis of the famous Landau Fermi liquid theory. In fact, the notion of finding new non-interacting quasiparticles to describe complicated interacting systems is a key paradigm in condensed matter physics.

A canonical example of such a complicated interacting system is phosphorus doped silicon near the insulating side of its metal-insulator transition. Here, a complex interplay between the effects of strong interactions and strong disorder results in observable properties markedly different from those of conventional metals or insulators. Perhaps such a system can also be described in terms of non-interacting quasiparticles like “free” electrons in a metal? This conjecture was first put forth by Phil Anderson in 1970 who dubbed such a system as a “Fermi-glass.” This description certainly holds in the absence of interactions as in the case of the celebrated “Anderson localization,” whereby strong disorder localizes electronic states. However, whether this description is possible in materials with both strong interactions and strong disorder has been an open question for nearly 50 years. By developing a unique spectroscopic technique based on strong terahertz frequency light (2D THz spectroscopy), we find the answer to this question is “No.” Interaction effects are always strong enough to preclude any description in terms of non-interacting quasiparticles.

Using 2D THz spectroscopy, we first observed distinct coherent phenomena, “THz photon echoes,” that allowed us to reliably measure the energy relaxation and decoherence times—typically known as T1 and T2times respectively—in a strongly interacting disordered material. The scaling of these times with temperature and disorder concentration was found to be at odds with Anderson’s conjecture. In our view, this new phenomenology can be best described as a “marginal Fermi glass.”

Our technique of 2D THz spectroscopy can be broadly applied to other complex materials, such as high-temperature superconductors and quantum spin liquids, to understand the fundamental nature of excitations and quasiparticles in these systems.

This research was published in the article, "Observation of a Marginal Fermi Glass," in Nature Physics (2021).

Kevin Pitts of the University of Illinois has been named chief research officer at Fermilab National Accelerator Laboratory beginning March 1. His focus will be on oversight for the international Deep Underground Neutrino Experiment, including advancing scientific excellence across the laboratory through strong communication, collaboration and coordination with the Department of Energy and other partners. He joins the laboratory as it prepares to usher in a new era of science and innovation in particle physics research and discovery. Pitts joins Fermilab after 22 years with the University of Illinois where he was most recently the vice provost for undergraduate education and a professor of physics in the Grainger College of Engineering. He has a long history working on experiments at Fermilab, including participation in the discovery of the top quark in 1995.  Additionally, he has been serving on the Long Baseline Neutrino Committee since 2016.

Illinois Physics Senior Academic Advisor Merissa Milton has been selected for the University of Illinois 2021 Campus Award for Excellence in Undergraduate Advising.

Recipients of this award are recognized for their excellence in and innovative approaches to undergraduate advising, and for having had a major impact on undergraduate students and their intellectual development through sustained academic advising relationships. The award, part of the Campus Awards for Excellence in Instruction program, will be presented to Milton at the annual Celebration of Teaching Excellence in May.

SABR is pleased to announce the 2021 recipients of the Henry Chadwick Award, established to honor the game’s great researchers — historians, statisticians, annalists, and archivists — for their invaluable contributions to making baseball the game that links America’s present with its past.

Alan Nathan (1946 – ) has been a professor of physics at the University of Illinois since 1977, with a specialty in experimental nuclear/particle physics. Now a professor emeritus, Nathan has spent the past quarter-century creating a body of knowledge around the physics of baseball. His extensive research and numerous articles, in particular on the collision between the bat and ball and the flight of the baseball, has dramatically expanded our quantitative understanding and visualization of baseball’s most fundamental interactions. Beyond the physical interactions themselves, Nathan’s research has examined their implications, from how a batter’s swing might be optimized to the insights extractable out of the data explosion from ballpark-installed technologies.

The American Institute for Medical and Biological Engineering (AIMBE) has announced the election of University of Illinois Professor of Bioengineering and Bliss Faculty Scholar Sergei Maslov, to its College of Fellows. Maslov holds an affiliate appointment at Illinois Physics and is a member of the Carle R. Woese Institute for Genomic Biology on the Urbana campus.
Maslov was nominated, reviewed, and elected by peers and members of the College of Fellows for his contributions to computational biology including microbiome dynamics, microbial and viral ecology, genomics, and studies of complex biological networks.