Cracking its whips:
coordination of flagellar locomotion in E. coli

Escherichia coli, a rod-shaped bacterium commonly found in the lower intestines of humans and other warm-blooded animals, varies widely in the number of flagella on the surface of any individual bacterial cell. Flagella—rotating whip-like structures driven by reversible motors— rotate in a counterclockwise direction to propel the bacterial cell in a swimming motion called “running”. When at least one flagellum moves in a clockwise direction, the cell begins to “tumble”, changing its directional course.

E. coli is able to control the time it spends swimming or tumbling to move towards a nutrient, such as glucose, or away from certain harmful chemicals. However, the details of how the number of flagella and the direction of rotation—clockwise or counterclockwise—influence the motion of the bacterium are not fully understood.

Now a research team led by biological physicists Yann Chemla at the University of Illinois and Ido Golding at Baylor College of Medicine has experimentally demonstrated that individual flagella on the same E. coli cell tend to move in a coordinated way, whether swimming or tumbling. The team used “optical tweezers” to immobilize individual E. coli cells under a microscope, enabling for the first time simultaneous tracking of both swimming behavior and flagellar motion for long durations.

Tumbling, the team observed, could be caused by a single flagellum stopping a run, but it often involves a concerted effort by many of the cell’s flagella. Based on their observation that E. coli cells with more flagella spend less time tumbling than would be predicted if a single flagella always “vetoed” a run, the team proposes a new mathematical relationship between the number of flagella on the cell, the direction of rotation, and the resulting probability that the cell will tumble. 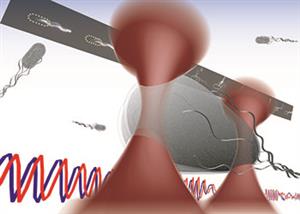 Artist's conception of a swimming E. coli cell trapped in place by two optical traps: Next to the optical traps is a sequence of images showing fluorescently labeled flagella on a trapped cell. Below the traps is a representative data trace obtained from the optical traps. Image courtesy of Yann Chemla
This work shows that swimming behavior in bacteria is less affected by variations in the number of flagella than expected.

Chemla explains, “What we’ve found is that E. coli has developed a mechanism that makes it relatively insensitive to variations in flagellar number. A cell will run and tumble about the same regardless of how many flagella it has—which is a good thing. Otherwise cells with few flagella would run too much, and cells with many flagella would tumble too much.”

This phenomenon may provide evolutionary advantages to E. coli.

“These cells need to be swimming and tumbling at an optimal frequency to survive,” continues Chemla. “If it runs too much, it can move away from areas with lots of nutrients or toward areas that may be toxic with no mechanism to get out. If it tumbles too much, it can never go anywhere and can get stuck in a bad spot.”

In continuing research, the team plans to explore further the mechanism by which bacteria coordinate their flagella.

In the laboratory, E. coli chemotaxis—locomotion prompted by the presence of particular chemicals in the cell’s environment— is considered a model system for studying cellular decision-making. The signaling network inside the cell that causes it to run and tumble has been studied extensively, but it hasn’t been correlated directly to the cell’s swimming behavior.

“Understanding how the cells process information from their environment to pick alternate fates—like swimming vs. tumbling—is certainly a goal. How this decision-making feature evolved in a simple organism like E. coli could provide insights into decision-making in more complex organisms,” asserts Chemla.

The team's findings have been published in the online journal eLIFE.

This work was supported by funding through an NSF Physics Frontier Center “Center for the Physics of Living Cells” Grant No. PHY-082265 (IG and YRC); NSF Grant No. PHY-1147498 (IG); NIH Grant No. R01 GM082837 (IG); NIH Grant No. R01 GM054365 (CVR); the Burroughs Wellcome Fund (YRC); the Welch Foundation Grant No Q-1759 (IG); and the Alfred P. Sloan Foundation (YRC). The conclusions presented are those of the scientists and not necessarily those of the funding agencies.

In The New York Times : A University Had a Great Coronavirus Plan, but Students Partied On

An unexpected upswing in positive tests at the University of Illinois at Urbana-Champaign showed how even the most comprehensive approaches to limiting the virus’s spread can break down.

NCSA and U of I Announce new Center for Astrophysical Surveys

The National Center for Supercomputing Applications (NCSA) and the University of Illinois at Urbana-Champaign are pleased to announce the new Center for AstroPhysical Surveys (CAPS). The center is a collaborative effort between NCSA, the Office of the Vice Chancellor for Research and Innovation, Department of Astronomy, and the Department of Physics at Illinois that seeks to bring cohesion and advancement to astrophysical survey science efforts across campus. This effort is led by Illinois Astronomy and Physics Professor Joaquin Vieira.

Logan Meredith, a doctoral candidate in Davide Curreli’s research group at the University of Illinois at Urbana-Champaign, is one of five graduate students chosen for a fellowship that places them at U.S. Department of Energy (DOE) facilities for extended periods.

The DOE National Nuclear Security Administration Laboratory Residency Graduate Fellowship (DOE NNSA LRGF) focuses on Ph.D. candidates working in selected areas important to national security. Fellows will serve at least two 12-week residencies at one or more of four DOE sites. The program encourages students to pursue their thesis research during their stays and to take on additional extended residencies.

Scientists at the newly founded Illinois Center for Advanced Studies of the Universe (ICASU) at the University of Illinois at Urbana-Champaign have been awarded $1.2 million total in two grants from the National Science Foundation (NSF).