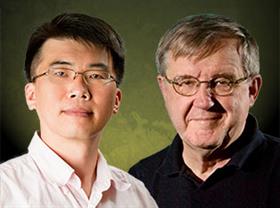 The CPLC at the University of Illinois at Urbana-Champaign is jointly directed by Gutsgell Professor of Physics Taekjip Ha (L) and Swanlund Professor of Physics Klaus Schulten (R).
Scientists have only begun to unravel the vast complexity of living systems: their evolution is the output of hierarchically organized adaptive dynamics that range from planetary scales and billions of years down to the nanometer and femtoseconds.

At the Center for the Physics of Living Cells (CPLC), a National Science Foundation (NSF) Physics Frontiers Center founded six years ago at the University of Illinois at Urbana-Champaign, a team of interdisciplinary scientists have tackled an ambitious program of in vitro and in vivo cellular research that is shedding new light on the inner workings of living systems.

The CPLC faculty, postdocs, graduate students, and visitors are physicists, bioengineers, biologists, and chemists who are pushing the boundaries of their specializations. Investigating cells and populations of cells at multiple length scales, they have made major advances at the leading-edge of their field, in imaging, molecular manipulation, computational modeling, molecular dynamics simulation, and theory. In the center’s first six years, CPLC-supported research generated 225 papers in peer-reviewed journals.

Now the CPLC has received an $8 million 5-year grant renewal from the NSF, to continue its research, education, and outreach missions.

CPLC co-director and Gutsgsell Professor of Physics Taekjip Ha comments, “We have only just begun to understand the physics of living systems. Bridging our understanding from in vitro to in vivo biological processes, learning how structure, organization, and DNA dynamics influence cellular functions and the stability of the genome, and how molecular motors interact and coordinate within crowded cells—and framing these investigations within multi-cellular populations—this will require new physical tools and a major coordinated effort to meet new experimental and theoretical challenges. The CPLC is uniquely poised at the forefront of this emerging field of research.”

Alongside its ambitious program of research, the CPLC offers an extensive educational outreach program serving a large number of scholars and researchers in the physical and biological scientific communities at the U. of I. and beyond, while actively promoting diversity in physics. In its first six years, CPLC Summer School trained 206 students from 94 different institutions worldwide in leading-edge research tools and methods. It also offered a campus-level physical biology boot camp for the scientific community at the U. of I., a weekly seminar series, and several summer programs for junior-high and high-school science teachers that featured curriculum development projects. CPLC also sponsors a graduate student research network, among many other efforts.

The CPLC Teaching Fellows Program provides pedagogy training and K-12 outreach experience for two CPLC graduate students each year. This opportunity enables students to build and maintain successful University/K-12 partnerships into the future, to better compete for grants that require an outreach component and to improve their ability to communicate science to diverse audiences.

CPLC co-director and Swanlund Professor of Physics Klaus Schulten attributes the center’s successes to the diverse training of its faculty, postdocs, and students: “The Center is a unique place—we have built a close-knit community of theorists and experimentalists from several complementary fields to focus on unsolved problems in the physics of living cells. These problems are strategically selected for their potential to advance technologies for biomedical and biological physics research. And we can already see the impact of our work. Today, single molecule imaging in vitro and in live cells is routinely performed in biological laboratories around the world with technologies developed here and taught in our outreach programs.”