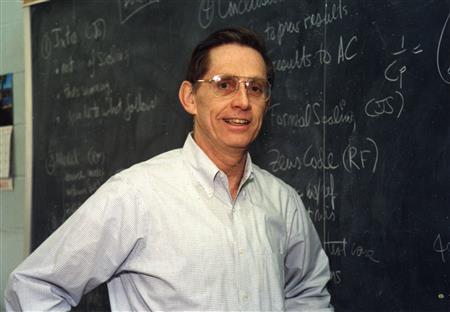 Emeritus Professor of Physics and former Department Head Jeremiah David Sullivan, 77, died on July 7, 2016, at his Urbana home, following a long illness. He is survived by his wife of 54 years, Sheila (Bonar) Sullivan, his daughter Maureen E. Sullivan, his son and daughter-in-law, Jeremiah J. and Jennifer Sullivan, and a granddaughter, Lily S. Sullivan. He was preceded in death by his parents, Jeremiah F. Sullivan and Doris Nutton Sullivan, his sisters, Doris Ann Bradbury and Mary Ellen Hanley, and a brother, David Hall Sullivan.

Sullivan was a theoretical particle physicist and leading arms control expert who made significant and lasting contributions to national security and the international peace effort through his scientific research and through his service at and beyond the University of Illinois at Urbana-Champaign.

Starting in 1974, Sullivan served as a member of JASON, an elite team of scientists tasked with advising the government on technical and highly classified national security matters. He was later appointed to numerous national arms control committees. With an ever courteous demeanor and a rare ability to guide rancorous debate to productive dialogue, Sullivan earned a reputation for strong consensus-style leadership.

In 2001, Professor Sullivan was appointed to a four-year term as the U.S. representative to the Advisory Panel on Security-Related Civil Science and Technology, a subcommittee of the NATO Science Committee. This panel, comprising representatives from 12 NATO countries, administered a funding program to support scientific collaboration among the NATO-member countries as well as countries in the former Warsaw Pact.

At the U. of I., Sullivan served as director of the Unit on Technology for Peacekeeping, of the Arms Control & Domestic and International Security (ACDIS) group. ACDIS is an interdisciplinary venture that facilitates objective research, academics, and outreach about international security issues within the academic and policymaking communities.

In his research, Sullivan made wide-ranging, lasting contributions to arms control and international security, including important detailed calculations of shock wave profiles from underground tests (with Illinois Physics colleague Professor Fred Lamb) and studies of technologies for enhancing the effectiveness of peace operations, comprehensive nuclear test ban issues, science-based stockpile stewardship, technology and policy of ballistic missile defenses, arms control verification, military and civilian uses of space, and science and public policy. His contributions were recognized by the 2000 Leo Szilard Award of the American Physical Society. The citation reads:

"For leadership in addressing technically complex and often controversial national security issues such as anti-ballistic missiles, stockpile stewardship, and a comprehensive test ban; and for setting a high standard for applying the rigorous methods of physics to the challenging problems of integrating advanced technology with sound policy in a democratic society."

In the early years of his career, Sullivan made significant contributions to particle physics, specifically in quantum electrodynamics, including elucidating electromagnetic interactions, photon structure functions, the Drell–Yan process, and hadron-hadron processes at high energy. His work earned him an international reputation and led to his selection for influential committee work, including the U.S. Department of Energy's High Energy Physics Advisory Panel; the Lawrence Berkeley Laboratory Particle Data Group Advisory Panel; and an appointment as acting head of the Theoretical Physics Division at the Fermi National Accelerator Laboratory in 1972.

Sullivan was born on November 15, 1938, in Norwood, Massachusetts. His parents were both high school teachers who instilled in him a deep appreciation for education. Sullivan received a bachelor’s degree in physics in 1960 from Carnegie Institute of Technology, now Carnegie Mellon University, where he was an Alfred P. Sloan Scholar. He received a doctoral degree in physics from Princeton University in 1964. He completed his postdoctoral work in the theoretical physics group at the Stanford Linear Accelerator Center (SLAC), before joining the faculty at Physics Illinois in 1967. Sullivan would become its ninth head of department, serving in that role for six years prior to his retirement in 2006.

In his spare time, Sullivan enjoyed sailing, international travel, carpentry and home-improvement projects, music, gardening, and time spent in nature. He was a voracious reader of history, current events, and broad-ranging science. He is remembered by friends and colleagues for his commitment to teaching, his easy smile and friendliness, and his superb sense of humor.