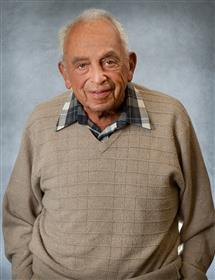 Goldwasser attended the Horace Mann School in New York City from 1930 to 1936.  He enrolled in physics at Harvard College in 1936, earning an AB degree in 1940. During World War II (1941–1945), he served as a civilian physicist with the U.S. Navy in the San Francisco Bay area, where he worked on methods to reduce ships’ magnetic signatures and thus allow them to avoid German mines. In 1945, he began graduate studies at the University of California, Berkeley, where studied the intensities and masses of cosmic ray particles, including the relative numbers of mesons and protons in sea-level cosmic radiation, completing a PhD in physics in 1950. He was a Westinghouse Fellow at Berkeley (1949–1950), and served for one year as a research associate on the Berkeley faculty. 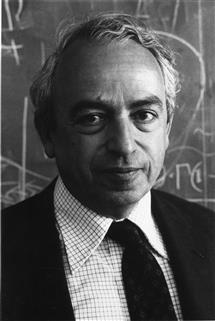 Edwin L. 'Ned' Goldwasser as a young professor at Physics Illinois.
Goldwasser vigorously pursued both research and teaching as a member of the faculty. He was the author of numerous technical publications on the properties of cosmic rays, energy loss of charged particles, photon interactions, and elementary particle interactions. He took a leading role in efforts by a consortium of Midwestern universities in the 1950s and 1960s to strengthen their research facilities in high-energy physics and to locate a national accelerator in the central United States.

A dedicated and inspiring teacher, Goldwasser wrote the then-influential introductory textbook Optics, Waves, Atoms and Nuclei (New York, W.A. Benjamin, 1965) and led the University of Illinois contingent of the Physical Science Study Committee, a collaborative effort by Illinois and the Massachusetts Institute of Technology to create a modern high-school physics curriculum. The resulting textbook and teacher’s guide, PSSC Physics, to which Goldwasser was a major contributor, transformed the way that physics was taught in U.S. high schools post-Sputnik. His overarching goal in teaching physics was to reveal to students what he called the beauty of physics—“its support of the unflinching drive of human beings to understand more about their surroundings—from the sub-microscopically small to the unlimitedly large.”

In 1967, with an Illinois site chosen by the U.S. Atomic Energy Commission as the location of the nation’s new “National Accelerator Laboratory” (now Fermi National Accelerator Laboratory), Goldwasser took an extended leave of absence from the University of Illinois to serve as deputy director of the new facility in Batavia, Illinois. As a founder of one of the nation’s premier scientific facilities, Goldwasser oversaw the construction of the laboratory—completing it on-time and under budget—scheduled its experimental program, and implemented its groundbreaking equal employment program. Dr. Robert Wilson, Fermilab director, said of Goldwasser in 1978, “The successes of the Laboratory, the firm foundation for the future, the cultural ambience, the spirit of opportunity for all, the international importance of our work, are all monuments to his sense of the value of science and its place in our society.”

After setting Fermilab firmly on its feet, Goldwasser returned to the University of Illinois in 1978 as Vice Chancellor for Research and Dean of the Graduate College. He became Vice Chancellor for Academic Affairs in 1980, and served in that position until 1986.  He took another extended leave that year to join the Central Design Group of the proposed Superconducting Super Collider accelerator facility, where he served as associate director until 1988. At that time, he returned to the University of Illinois as acting director of the Office of International Programs and Studies, and he also served as director of the University of Illinois’ Computer-assisted Education Research Laboratory.   In 1990, following his retirement from the University, he was appointed a “Distinguished Scholar” at the California Institute of Technology to work on the LIGO project.

Advancement of Science. He received Fulbright and Guggenheim fellowships and served on the Atomic Energy Commission’s General Advisory Committee and on the University of California’s committees that oversee its three national laboratories.