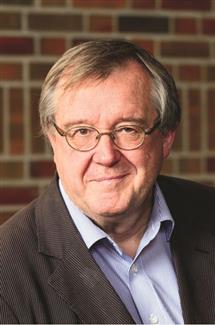 Professor of Physics Klaus J. Schulten was a great innovator of computational methods to study the physical and chemical basis of biological processes. Schulten was a Swanlund Professor of Physics, the Director for the NIH Center for Macromolecular Modeling at Beckman Institute, and co-Director of the NSF Center for the Physics of Living Cells.  He was also affiliated with the Department of Chemistry and the Center for Biophysics and Computational Biology.  While at the University of Illinois, he trained 77 graduate students in physics, biophysics, and chemistry.

Schulten led the Theoretical and Computational Biophysics Group, which he founded at the Beckman Institute for Advanced Science and Technology in 1989. With a background in chemical physics and a keen understanding of the potential of powerful computers to model biological structures and the physics and chemistry that drives them, Schulten led the development of software that enables scientists around the world to observe how molecules behave and interact at the atomic scale. These include the program VMD for the interactive display, animation and analysis of large biomolecules, and the large-scale molecular dynamics simulation program NAMD, which is capable of moment-by-moment chemical interactions of as many as 100 million atoms. Schulten built his own massively parallel computer when they were not yet available commercially, and he was among the first to use the Blue Waters supercomputer at the National Center for Supercomputing Applications for research.

Schulten’s group made fundamental contributions to numerous areas of biology, most recently to understanding photosynthesis, force generation in cells, membrane channel dynamics, and large-scale cellular organization. He and his colleagues revealed the precise chemical structure of the HIV capsid, revealed new details of the dynamic assembly of the ribosome, and contributed to a deeper understanding of the chemistry of odor detection. One of his long-term interests was in animal vision, studying the effect of Earth’s magnetic field on the migration of birds. He will be remembered not just for his groundbreaking development of computational approaches to biology, but for the many important biological insights that emerged from these approaches, in fields as wide-ranging as neuroscience and molecular biology.

Schulten was born on January 12, 1947 in Recklinghausen, Germany. He graduated from the University of Muenster with a degree in physics in 1969, and obtained a doctoral degree in chemical physics from Harvard University in 1974.