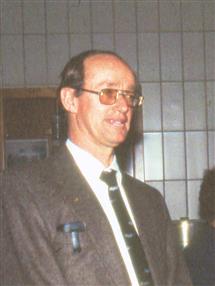 Professor Emeritus of Physics and former Associate Vice Chancellor for Research Harvey Stapleton was an experimental condensed matter physicist. His work involving electron spin resonance and relaxation to measure the low temperature properties of solids and biomolecules was widely published. He studied paramagnetic resonance and relaxation in rare earths, actinides, and metalloproteins. The work on metalloproteins, which revealed their fractal nature, had a major impact on the development of biophysics.

Stapleton was known for having a level head and a cheerful attitude. He provided thorough training to his students; during his tenure at Illinois, he led 25 graduate students to their doctoral degrees. These former students went on to careers at major research institutions. Over his career, Stapleton authored or co-authored more than 50 papers. He was an Alfred P. Sloan Fellow and a fellow of the American Physical Society.

Stapleton received a bachelor’s degree in physics from the University of Michigan in 1957 and a doctoral degree in physics from the University of California, Berkeley in 1961. The same year, he joined the faculty of Physics Illinois as an assistant professor of physics and progressed rapidly though the faculty ranks to become a full professor in 1969. In 1980, Stapleton took a half-time administrative position as associate dean of the Graduate College, while continuing his research in physics. In 1985, he was named executive secretary of the Campus Research Board, and in 1986, he was appointed an associate vice chancellor for research, also on a halftime basis. In 1987, after a nationwide search, both of these administrative appointments were made fulltime. He retired from the U. of I. in 1995.