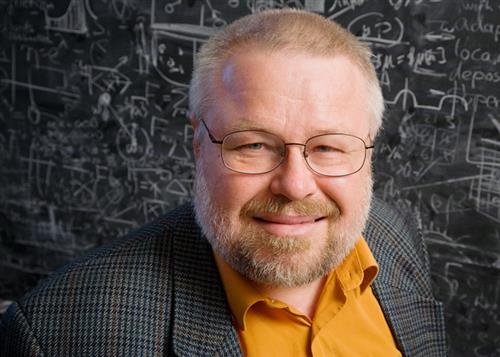 Professor of Physics Alfred Wilhelm Hubler died on Saturday, January 27, 2018, at Carle Foundation Hospital in Urbana, following a four-year battle with lymphoma. He was 60 years old.

Hubler worked on a broad range of theoretical problems in nonlinear dynamics and occassionally guided experimental and computational work investigating nonlinear phenomena. He made important contributions to the study of the chaotic dynamics in classical systems, both in idealized physical models and in engineering systems.

Hubler is best known for his research into the control of chaos, the resonant coupling of nonlinear oscillators, and resonant stimulation and novel spectroscopies in nonlinear systems. He was among the first to recognize that seemingly erratic, random motions associated with deterministic chaos could, in fact, be controlled, and that "chaotic" systems could be more "flexible" than systems undergoing more regular motion.

Over the course of his career, Hubler maintained a growing list of unique research ideas, including designing wireless power for cars and developing an ultra-powerful battery. He held four patents.

In 1990, Hubler was named the associate director of the Center for Complex Systems Research at Illinois, eventually becoming its director. On a yearlong sabbatical in Japan in 1993/94, he served as a Toshiba Chair Professor at Keio University, Tokyo. Hubler also spent several summers as a visiting scholar at the Santa Fe Institute in New Mexico.

Hubler was a skillful and committed teacher, and his name regularly appeared on the U or I List of Teachers Ranked Excellent by Their Students. Hubler developed an interactive web-based software package for teaching science; CyberProf software analyzes student homework problems in real time and provides individualized feedback to each student.

Hubler was born on May 16, 1957, in Munich, Germany, to Wilhelm and Therese (née Kammerloher) Hubler. He met Marietta (née Deutscher) Hubler when he was 16, and they were married seven years later. The couple had six daughters, three born in Germany, three in Illinois.