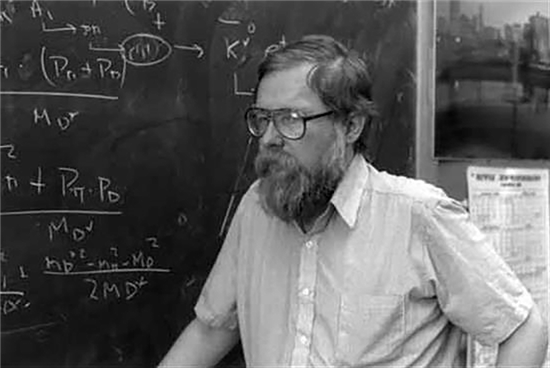 Professor Emeritus of Physics James E. Wiss was an experimental particle physicist who joined the Illinois faculty in 1979, initially as a visiting research assistant professor, but rising rapidly to attain the rank of full professor in 1988. His arrival in Urbana after finishing his 1977 PhD at Berkeley was really a homecoming for Jim, who had graduated from the University of Illinois with a B.S. in Physics in 1971.

The direction of much of Jim’s work was strongly informed by his early experiences at Berkeley. Upon his arrival, he began studying experimental high energy physics with Professor Owen Chamberlain, who had received a Nobel Prize for his earlier work. But finding that his opportunities were limited in the Chamberlain group, Jim switched to Professor William Chinowski’s group, which allowed him to work at the Stanford Linear Accelerator Laboratory (SLAC). In that collaboration Jim established a warm relationship with Professor Gerson Goldhaber; they tended to meet most mornings for several hours, working on plans for the analysis of the SLAC data. Their experiment studied collisions of energetic electrons and positrons. (The positron is the antiparticle of the electron.)

Jim’s choice was fortunate, since the SLAC facility had sufficient energy to permit the discovery of particles containing charmed quarks, as well as a third charged lepton—a cousin of the electron, named the tau—which revolutionized the understanding of the fundamental forces. Two Nobel prizes were awarded for these discoveries. Jim’s PhD thesis presented the discovery of the D*, the lightest of the strongly decaying charmed mesons.

Jim continued his studies of systems containing heavy quarks produced in the annihilations of electrons and positrons and, later, in the interactions of gamma rays and other energetic particles in sophisticated multi-ton spectrometers. This line of research occupied most of his career.

As was the case with many of his colleagues, Jim built instrumentation for his experiments in the shops at Illinois and Fermilab. However, his most important contributions in advancing our understanding of the fundamental interactions probably arose from his exceptionally deep understanding of the phenomenology of heavy quarks. (He felt that his greatest strength was development of statistical techniques in data analysis.) This expertise let him guide his younger colleagues (both graduate students and post docs) in teasing out and characterizing the underlying physical principles that were otherwise masked by the tangled final states in their data.

Wiss returned to the University of Illinois as a visiting research assistant professor in 1977 and was soon promoted to assistant professor and then professor. He primarily worked on heavy quark studies in a sequence of enormously productive experiments run at Fermilab, which were known to insiders as E87, E687, and FOCUS. E687 and FOCUS included the participation of foreign scientists from Italy, Mexico, Korea, and Brazil, and it fell to Jim to “translate” the collaboration’s papers into scientific English.

These experiments produced about 350 short articles as well as a number of longer papers, some of which were published in journals such as “Annual Reviews of Experimental High Energy Physics.” Many dozens of reports were published in the proceedings from international conferences. The results were important—some were groundbreaking—but too technical to describe here. Much of the work was done by Wiss and his Illinois colleagues. He was named an American Physical Society Fellow in 2000 for his significant contributions to heavy quark physics.

After most of the Fermilab work was completed, Wiss continued this line of research as a member of the CLEO experiment at Cornell University. But the problems of insufficient funding led to the cancellation of the BTeV experiment, a next-generation heavy quark experiment to be built at Fermilab. Jim was one of the leaders of this project. In 2013, Jim decided to change direction, focusing entirely on teaching rather than a mix of research and teaching.

Tony Liss was a member of the Illinois particle physics group for many years, though he has moved on, now serving as Provost and Senior Vice President for Academic Affairs of The City College of New York. After learning of Jim’s death, he wrote,

“I had the office next to Jim for nearly 25 years, and I want to share a couple of observations from that vantage point. I always knew when Jim was having office hours because there would be a crowd of students in his office and leaking out into the hall while Jim held court at the blackboard. It was a thing to behold and to listen to. Jim was an artist at explaining difficult concepts, and he was not satisfied until the students were satisfied. I learned a lot of physics, and a lot about how to teach physics just eavesdropping on those sessions.

The second observation is a fairly obvious one if you knew Jim. Jim absolutely loved physics, and the best way to do physics for Jim was with a jazz CD playing in the background. I never saw Jim staring off into space, or out the window, he was always working. And his meetings with his graduate students and post docs were as vibrant discussions where everyone was treated as an equal. Jim was incredibly generous with his knowledge; his only goal was to get the result of whatever he was working on and make sure it was correct.

When I first got to Illinois, it was just as the Superconducting Supercollider, our next great accelerator for high-energy physics, was getting started (and about five years before it was canceled). I was going to a workshop on building a detector for it. Jim was not going but he was interested in the project. So, we talked about contributing to the tracking studies, about which I knew very little. Jim shared a huge amount of work that he had done for another experiment with me, taught me how to use it, and discussed the output with me as we put together a tracking chamber design to present at the workshop. So, I got to go, as a brand-new assistant professor, and present all this work at the workshop, which never would have happened without Jim sharing his code with me. Of course, he was listed as a co-author of the work, but I got to present it. That is what he was like. He was interested in the result, credit and glory didn’t really matter.”

Rob Gardner, now a research professor in the Enrico Fermi Institute at the University of Chicago and Deputy Dean for Computing in the Physical Sciences Division, was a postdoc and visiting assistant professor in Jim’s group and worked with him on the E687 and FOCUS experiments at Fermilab and on the supercollider project.

“It is difficult to overstate the impact Jim had on my formation as a particle physicist with a computational bent. Each day began in his office with analysis and interpretation of results from the overnight data processing or detector simulation runs on the computers we had in the department at that time. We were sitting on a very rich charm particle data set, and Jim’s goal was to squeeze every last ounce of it to reveal and measure the quantum properties of heavy quarks. He loved charm physics, statistics, and model fitting. These morning discussions could sometimes last until lunch, at which point we would continue them down at Murphy’s on Green Street, developing the strategy for the next steps. Long afternoons of quiet analysis or writing papers usually followed, the sounds of Charlie Parker’s music coming from Jim’s office across the hall. There was little email or other modern disruptions back then; the pace always seemed relaxed yet incredibly productive. When there were setbacks, a disappointment, or some other result that challenged our thinking, Jim’s response was always “let’s get coffee” and “we’d sort it out”.

I always enjoyed trips to Fermilab with him, to work on experiments or give talks at collaboration meetings, which were a sort of competitive sport for Jim. I learned quite a lot about physics and analysis on the backroads between Urbana and Batavia. I fondly remember taking shifts with Jim in the wideband laboratory. There was the joy of laboratory work and even sometimes drama in the “counting house” where we recorded data with our FOCUS collaborators. After a week of long days and nights spent successfully commissioning a rebuilt detector, we returned to Urbana late in the evening. As he dropped me off, he remarked “it’s been real.” It surely was. Of the many memories and phrases from Jim that I carry around in my head, that is one I’ll savor.

Jim was born in 1950 and died in July 2020. He was an avid golfer and possessed ample common sense, and a bone-dry, ready sense of humor. We mourn his passing and will miss him.