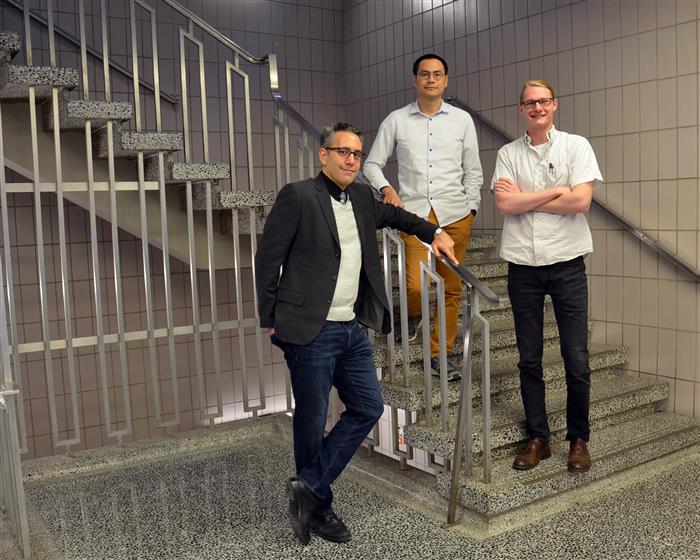 Illinois Physics Professor Nico Yunes (L) poses with with postdoc Hector Silva (middle) and graduate student Scott Perkins in the foyer of Loomis Laboratory of Physics. Photo by Siv Schwink for Illinois Physics
Albert Einstein presented his theory of gravity, called the General theory of relativity (GR) in 1915. The theory describes gravity as a geometric property of space-time. Not long after, in 1919 Eddington confirmed one of the major predictions of GR: bending of light. Since then, many experiments have been proposed to test GR. Before the 1970s most of these tests were performed in the weak gravity field of the solar system. The discovery of pulsars, which are strongly magnetized rotating Neutron stars, provided scientists a new testing ground to test GR where they could study strongly gravitating bodies. GR passed all these tests with flying colors, but, it was still un-tested in the highly dynamical strong field regimes: regimes that include interactions between very strongly gravitating bodies (strong field) like Black holes and neutron stars and, where the characteristic speeds in the system are comparable to the speed of light (dynamical).

This changed on September 14, 2015 when the twin LIGO detectors located in Livingston and Hanford, USA, detected gravitational wave (GW) signals from the merger of two black holes. This was the beginning of a new era for observational astronomy where GW opened another window to look at the Universe. These observations also provided a unique opportunity to test Einstein’s GR in previously un-tested regimes. Multiple publications there-after studied the consistency of the many GW signals detected by LIGO, with the predictions of GR, and so far there has been no evidence in support of GR deviations. Recently (March, 2019), the LIGO-Virgo collaboration (LVC) released the results of testing GR using 10 binary black hole merger signals. In addition to residual tests (testing whether the residual remaining after subtracting the GR prediction from the data, is consistent with detector noise), and consistency tests (testing whether the final mass and spin of the black hole inferred from the low and high frequency regions of the signal, are consistent with each other), the collaboration also performed parameterized tests. These tests considered parameterized deviations from GR and provided bounds on these deviations. The deviations are generic, can be mapped to GR deviations predicted by alternative theories of gravity and, are usually a function of the system parameters like masses and spins etc., and any additional fundamental constants postulated by the alternative theory.

We focused on a specific class of alternative theories called "higher curvature theories" which attempt to unify gravity with quantum mechanics. Within this class we analyzed two models: the Einstein-dilaton-Gauss-Bonnet (EdGB) and dynamical Chern-Simons (dCS) theories. The purpose of our paper was to first map the constraints obtained by the LVC, to the predictions of these theories and then constrain the additional fundamental constants (coupling constants) of these theories. We obtained the most stringent bounds yet, on the coupling constant of EdGB theory. We also showed that, unless we employed some statistical manipulation of the data provided by the LVC, it was not possible to obtain similar constraints on the dCS theory. This also affirmed our argument in the paper that, although studying generic deviations from GR is a simple way of testing the consistency of GR with the data, we need to work with theory specific waveform models of the GW signal, in order to better constrain alternative theories. This is a work in progress and we will soon publish these results too.

This research was published in the article "Fundamental Physics Implications for Higher-Curvature Theories from Binary Black Hole Signals in the LIGO-Virgo Catalog GWTC-1," November 4, 2019 in Physical Review Letters, 123, 191101.