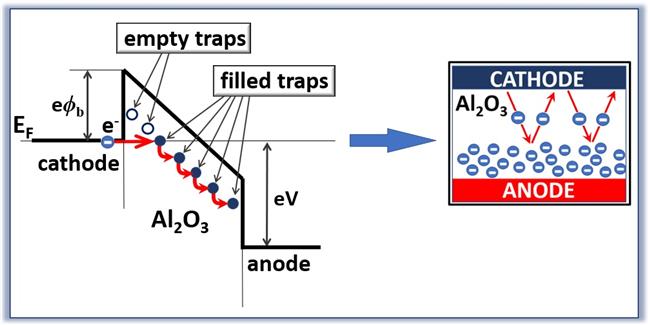 Abstract: The main mechanism of energy loss in capacitors with nanoscale dielectric films is leakage currents. Using the example of Al-Al2O3-Al, we show that there are two main contributions, namely the cold field emission effect and the hopping conductivity through the dielectric. Our main finding is that an application of a high electric field, ~0.6-0.7 GV/m, causes electrons to penetrate the dielectric. If the temperature is sufficiently low, such electrons become permanently trapped in the dielectric. To achieve a strong charging of the dielectric, the voltage needs to be high enough, so that a field emission occurs from the cathode into the dielectric. Such a strongly charged dielectric layer generates a Coulomb barrier and leads to a suppression of the leakage current. Thus, after the dielectric nanolayer of the capacitor is charged, the field emission and the hopping conductivity are both suppressed, and the hysteresis of the I-V curve disappears. The phenomenon is observed at temperatures up to ~225 K. It would be advantageous to identify insulators in which the phenomenon of the Coulomb barriers persists even up to the room temperature, but at this time it is not known whether such dielectrics exist and/or can be designed.