Illinois Physics graduate student Anuva Aishwarya was selected for the 2022 Wayne B. Nottingham Prize. The Nottingham Prize is awarded annually at the Physical Electronics Conference for the best paper presenting new research results in the field of surface science. 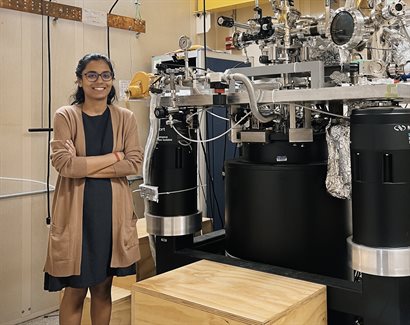 ishwarya is a member of the Vidya Madhavan research group at UIUC, which focuses on fundamental problems in quantum materials. At the conference, Aishwarya presented a novel scanning tunneling microscopy (STM) method for which she and her team members in the Madhavan lab developed a new class of STM probe tips using nanowires of crystals. The innovative microscopy tool is ideally suited to explorations of excitations in materials and has implications for new developments in quantum computing.

Aishwarya is the first presenter from the University of Illinois Urbana-Champaign to be selected for this prize in the 57 years since it was first awarded.

“I am beyond excited to realize such a first of its kind nanowire-tip based STM and ask what more puzzles await to be solved or created with it! I feel honored and humbled to be receiving the Nottingham prize and hope to follow in the footsteps of its past recipients who went on to become pioneers in the field of surface science. I am grateful to my advisor, Professor Vidya Madhavan, for nominating me for this award and guiding me throughout my PhD."

“While marveling at the technique of STM for all of its abilities, I have always wondered if it were possible to take conventional STM measurements a step further,” Aishwarya says of the impetus for her research presented at the conference. “Regular STMs use a sharp, metallic tip that is processed by annealing or field emission until it has a flat density of states (DOS). For all practical purposes, we ignore the tip contribution—because of its flat DOS—and measure the current signal to get information about the sample.”

“In this work, we asked a different question. What if the tip, instead of being a boring metal, were in fact another interesting crystal with a well-defined band structure? This is what I set out to do in my PhD studies with the help of my colleagues, Dr. Lin Jiao (former post doc in Madhavan lab) and Zhuozhen Cai (former undergraduate mentee).”

The team has demonstrated that this new type of STM probe has novel capabilities.

“The nanowire STM tip opens doors to a new form of spectroscopy akin to scanning Josephson tunneling used to visualize Cooper pairs in superconductors,” Aishwarya explains. “We have used a topological Kondo insulator with spin-momentum locked Dirac electrons at the Fermi energy as a probe tip, to visualize atomic scale spin contrast in an antiferromagnet with striped spin texture. We attach a nanowire of the topological insulator to an existing metallic tip using a technique called focused ion beam, thereby creating a new class of nanowire tips. We have not only shown that this functionalized tip can work reproducibly in the STM environment but have also demonstrated the tunneling of spin-polarized Dirac electrons.”

This work has been accepted for publication in the September 2022 issue of Science. Aishwarya is already planning her future studies that will develop this new STM technique further.

“Because of its unique properties, a topological insulator nanowire as an STM probe tip is not just a glorified semiconducting tip but has far-reaching implications for changing the way we observe or manipulate excitations of a material,” she says. “Major technology companies such as Google have recently undertaken major efforts towards building quantum computers. Manipulating Majorana particles, which are excitations of a superconductor is at the heart of realizing fault tolerant quantum computers.

“Majorana particles have been shown to exist at the ends of a topological insulator nanowires in proximity to an s-wave superconductor. The topological insulator nanowire tip coated with a superconducting shell will be a textbook ‘Majorana probe.’ My current and long-term research endeavors will be to design a Majorana probe within an STM environment that allows probing Majorana excitations and manipulating them.”

Read more about this groundbreaking research on the IQUIST website: https://iquist.illinois.edu/news/51018.