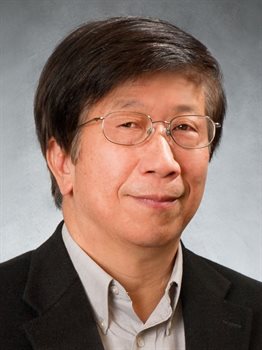 Illinois Physics Professor Jen-Chieh Peng has been selected for the 2023 Tom W. Bonner Prize in Nuclear Physics of the American Physical Society (APS). This prize is the highest honor conferred by the society for work in experimental nuclear physics that includes the development of a method, technique, or device that advances sciences.

The citations reads, “For pioneering work on studying antiquark distributions in the nucleons and nuclei using the Drell-Yan process as an experimental tool, and for seminal work on elucidating the origins of the flavor asymmetries of light-quark sea in the nucleons.”

In collaboration with Joel Moss, Gerry Garvey, Chuck Brown, and others, Peng initiated and carried out a series of experiments at Fermilab over the past 35 years to probe the antiquark content of the proton and nuclei using the Drell-Yan process. These experiments found clear evidence that the anti-up and anti-down quarks have asymmetric distributions in the proton.

Over the course of his career, Peng has made seminal contributions to other problems related to the fundamental structure of matter and its interactions. This includes the study of neutrino oscillations with the Daya Bay Reactor Neutrino Experiment in China, for which Peng and his collaborators were awarded the 2016 Breakthrough Prize in Fundamental Physics.

Peng is a Fellow of the American Physical Society, an Academician of the Academia Sinica in Taiwan, and a Laboratory Fellow of Los Alamos National Laboratory. He received the Distinguished Alumni Award from Tunghai University in 2020 and was named a Yu-Shan Scholar in Taiwan in 2020.

Peng received his bachelor's degree in physics from Tunghai University in Taiwan in 1970 and his doctoral degree in nuclear physics from the University of Pittsburgh in 1975. He worked as a researcher at the Centre d' Études Nucléaires de Saclay in France and at the University of Pittsburgh, before joining the Physics Division of Los Alamos National Laboratory in 1978. Peng joined the faculty at Illinois Physics in February 2002.