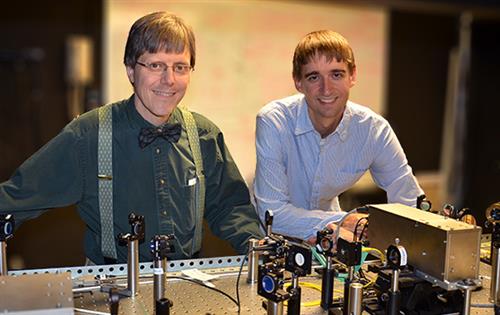 Einstein was wrong about at least one thing: There are, in fact, “spooky actions at a distance,” as now proven by researchers at the National Institute of Standards and Technology (NIST), including several members of physicist Paul Kwiat’s research group at the University of Illinois at Urbana-Champaign.

Einstein used that term to refer to quantum mechanics, which describes the curious behavior of the smallest particles of matter and light. He was referring, specifically, to entanglement, the idea that two physically separated particles can have correlated properties, with values that are uncertain until they are measured. Einstein was dubious, and until now, researchers have been unable to support it with near-total confidence.

As described in a paper posted online and submitted to Physical Review Letters (PRL), members of the experiment from several institutions created pairs of identical light particles, or photons, and sent them to two different locations to be measured. The researchers showed the measured results were not only correlated, but also—by eliminating all other known options—that these correlations cannot be caused by the locally controlled, “realistic” universe Einstein thought we lived in. This implies a different explanation such as entanglement.

“Local realism is a very natural viewpoint, one we implicitly assume in everyday life,” explains U. of I. physics graduate student Brad Christensen, who participated in setting up and running the experiment carried out at NIST. “But our experiment shows to the best that science will allow, that this view of reality is simply wrong.”

The experiment performed is a version of a “Bell test”, named for physicist John Bell who in 1964 showed there are limits to measurement correlations that can be ascribed to local, pre-existing (i.e., realistic) conditions. Additional correlations beyond those limits would require either sending signals faster than the speed of light, which scientists consider impossible, or another mechanism, such as quantum entanglement. 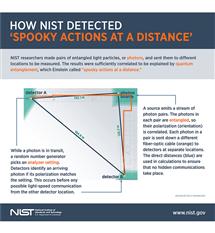 All previous Bell tests have been required to make additional assumptions to argue against local realism. These assumptions are called “loopholes” – if any one of them were invalid, one could explain the strange experimental results without contradicting local realism. Recent technological advances in sources, detectors, and random number generators have made it possible to perform a Bell test without any additional assumptions, a loophole-free test.

In the experiment, the entangled photon source and the two detectors were located in three different, widely separated rooms on the same floor in a large laboratory building at NIST. The two detectors are 184 meters apart, and 126 and 132 meters, respectively, from the photon source. The source creates a stream of photon pairs through a common process in which a laser beam stimulates a special type of crystal. This process is generally presumed to create pairs of photons that are entangled, so that the photons’ polarizations are highly correlated with one another. Polarization refers to the specific orientation of the photon, like vertical or horizontal (polarizing sunglasses preferentially block horizontally polarized light), analogous to the two sides of a coin.

Photon pairs are then separated and sent by fiber-optic cable to separate detectors in the distant rooms. While the photons are in flight, a random number generator picks one of two polarization settings for each polarization analyzer; any transmitted photons are sent to the high efficiency NIST detectors. The final data were in agreement with the ‘nonlocal’ entanglement-based predictions of quantum mechanics, but completely inconsistent with a local realistic interpretation: The researchers calculated that the maximum chance of local realism producing their results is less than 1 in 100 million. This outcome exceeds the particle physics community’s requirement for a “5 sigma” result needed to declare something a discovery, a level of certainty not achieved in a recently reported experiment by researchers at Delft University of Technology in the Netherlands.

“I’ve been working on and off towards this result for over 20 years, since I first published a paper on how to create this sort of entangled photon source,” shares physicist Paul Kwiat of the University of Illinois at Urbana-Champaign, “It’s wonderful to finally have a definitive unambiguous test.”

The loophole-free Bell-test paper was submitted to PRL with another paper by a team at the University of Vienna in Austria who used a similar setup.

The experiment closed the three major loopholes as follows:

Fair sampling: Thanks to improved single-photon detectors, the experiment was efficient enough (~75%) to ensure that the detected photons and measurement results were representative of the actual totals, thus closing the ‘detection loophole’, previously closed with photons by the University of Illinois and Austrian groups using the NIST detectors.

No faster-than-light communication: The two detectors measured photons from the same pair a few hundreds of nanoseconds apart, finishing more than 40 nanoseconds before any light-speed communication could take place between the detectors. Information traveling at the speed of light would require more than 600 nanoseconds to travel between the detectors. Kristina Meier, now a physics graduate student at UIUC, helped develop the pulsed laser used to synchronize the experiment while working at NIST in Gaithersburg.

Freedom of choice: Detector settings were chosen by random number generators operating outside the light cone (i.e., possible influence) of the photon source, and thus, were free from manipulation. Two of the random number generators used were developed by UIUC electrical engineering graduate student Michael Wayne working at NIST in Gaithersburg. To further ensure that hidden variables such as power grid fluctuations could not have influenced the results, the researchers performed additional experimental runs mixed with another source of randomness—data from popular movies, television shows and the digits of Pi, prepared by UIUC undergraduate physics students Joseph Chapman and Malhar Jere. The outcomes were unaffected.

Funding for the University of Illinois contributions to the experiment was provided in part by a grant from the National Science Foundation.