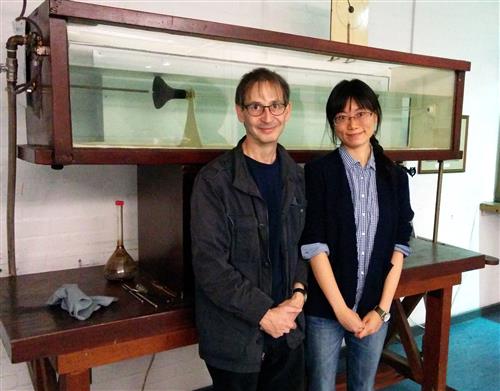 Nigel Goldenfeld and Hong-Yan Shih in front of the original apparatus used by Osborne Reynolds in 1883 to conduct the first scientific studies of the laminar-turbulent transition in pipe flow. Reynolds' apparatus is on display at The University of Manchester, School of Mechanical, Aerospace and Civil Engineering, UK.

As anyone who has experienced turbulence knows, its onset and departure are abrupt, and how long it lasts seems to be unpredictable. Fast flowing fluids are always turbulent, but at slower speeds the flow transitions to smooth and predictable (laminar) with intermittent patches of turbulence. In the human body, transitional turbulence can be deadly. Near the transition to turbulence, violent oscillations between laminar and turbulent blood flow can lead to aneurisms that rupture the arteries in the heart.

How does transitional turbulence die away? And what controls its lifetime? These questions have perplexed scientists ever since the first experiments were performed in 1883.

Now, physicist Nigel Goldenfeld, graduate student Hong-Yan Shih, and former undergraduate student Tsung-Lin Hsieh at the University of Illinois at Urbana-Champaign have developed a theoretical understanding of this laminar-turbulent transition that explains the lifetime of turbulent flows.

“What my colleagues and I found is a completely unexpected analogy between the transition to turbulent flow and the behavior of an ecosystem on the edge of extinction," Goldenfeld remarks.

In this work, the researchers started from the most detailed and fundamental equations of fluid flow in a pipe, but they discovered that near the transition, most of the complexity was not important. In fact, to explain and reproduce through computer simulation the most precise experiments ever done on the laminar-turbulent transition, they found that only two classes of fluid motion were needed: a swirling vortex mode around the axis of the pipe and random, irregular fluctuations in the center of the pipe. To the researchers’ surprise, these modes behaved like predators and prey in an ecosystem on the verge of extinction: the time for the predators and prey to die out corresponded to the lifetime of the transitional turbulence state.

The Illinois researchers approached the problem not by thinking about fluid mechanics, but by thinking about phase transitions—the complex phenomena that occur when matter changes its state to become ordered. Examples include the formation of magnets, the formation of ice crystals from water, or even the ordering that occurred when the Universe cooled after the Big Bang, leading to the formation of all known matter. By regarding the turbulence transition as being like a phase transition, they were able to utilize conceptual and mathematical techniques not usually considered in the context of fluid flow, such as methods from modern statistical mechanics and even population biology.

The article was published online on November 16, 2015 in Nature Physics.

Goldenfeld explains, “In physics, we often make use of minimal descriptions of collective behavior, stripping away details of individual particles. So, if we were trying to understand the orbit of the planet Mars around the Sun, we can pretend the planet is a point—a particle with no structure—and then it is quite simple to describe what is actually going on. The transition from laminar flow to turbulence involves very complicated phenomena, most of which aren’t important. Producing a simpler model is useful, because we are not blinded by all of the complexities of the phenomenon.”

The transition between laminar and turbulent flow was first mentioned by Osborne Reynolds in a classic experiment published in 1883. Since then, various measurements have been made of the lifetime of turbulence, but the huge range over which the turbulence lifetime varies created insuperable experimental difficulties. In 2008, Björn Hof and colleagues at the Max Planck Institute in Göttingen, Germany, made a breakthrough, developing an ingenious and very sensitive technique to study how long turbulent phases persist. These results quantified how the lifetime of turbulence varied so strongly with the fluid flow speed, defying theoretical understanding at first. The Illinois researchers were able to account for the detailed results from these experiments and to show that similar phenomena are predicted to occur near the extinction of predator-prey ecosystems. 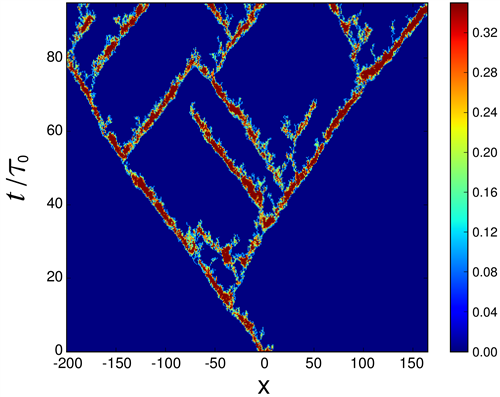 Simulations of an ecological model show that an initial patch of prey splits to form predator-prey traveling waves, analogous to the spatiotemporal intermittency of turbulent patches in pipe flow. Image courtesy of H.-Y. Shih, T.-L. Hsieh, and N. Goldenfeld, University of Illinois at Urbana-Champaign

The Illinois group had clues from their work on population biology and nonlinear dynamics about the ecosystem to pipe turbulence analogy, but it was not until Tsung-Lin Hsieh, at that time an undergraduate, was able to perform detailed computer simulations of fluid flow in a pipe that the specific details became clear.

Goldenfeld notes, “Tsung-Lin used a wonderful open-source code written by British mathematician Ashley Willis to run computer simulations of pipe flow. We were looking for a collective mode, and we found it.”

Shih explains, “The analogy of this type of system to laminar-turbulence oscillations provides a simpler, minimal model to study. The fluctuating turbulence is analogous to the prey population, and the zonal flow is like the predator population. The parallels between these oscillations in pipe flow and predator-prey dynamics in biological systems were a big surprise to us. In our group, we also study biological problems, so it was interesting that we could apply the methods of biology to the problem of turbulence.”

From this discovery, the researchers were able to construct the simplest ecological model that possessed all the symmetries of the fluid interactions. Hong-Yan Shih developed a computer program that simulated predator-prey dynamics near extinction, building on her earlier research on ecological and evolutionary dynamics. She confirmed that the ecosystem dynamics precisely mimics the mathematical behavior found experimentally in the laminar-turbulence transition in pipe flow.

The Illinois researchers also showed that near the transition, their simple ecological model is mathematically equivalent to an even simpler model that had been suspected to describe the laminar-turbulent transition. In this model, known as directed percolation, particles hop on a disordered lattice, rather like water percolating downwards under the influence of gravity in a coffee machine. Whether or not they can pass from one side of the lattice to the other depends on the disorder, such as the compactness of the coffee grains in the espresso machine. At the point when the particles can no longer get through, the system is behaving mathematically like the transition in turbulence, as indicated in earlier computer experiments by Maksim Sipos and Nigel Goldenfeld. The new results establish that this is not an accident and applies to both turbulence and ecology.

Turbulence is important economically, because it creates much more frictional drag than laminar flow, making transport of oil and other fluids through pipelines expensive and energy intensive. The Illinois researchers hope that their work might lead to an improved understanding of how the onset of turbulence can be controlled, thus potentially reducing energy costs in oil pipelines. The work may also have implications for cardiovascular medicine, perhaps reducing the risk of aneurisms.

This research was supported in part by the National Science Foundation.