Three Physics Illinois faculty members—Professors Matthias Grosse Perdekamp, Vidya Madhavan, and Brian DeMarco—have been elected Fellows of the American Physical Society. Election to Fellowship is a distinct honor that recognizes significant contributions to the field, including outstanding physics research, important applications of physics, leadership in or service to physics, or significant contributions to physics education. 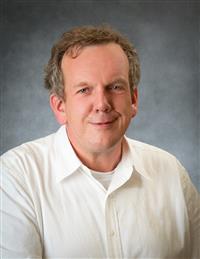 Matthias Grosse Perdekamp works in experimental nuclear physics. He currently carries out experiments at the Relativistic Heavy Ion Collider (RHIC) at Brookhaven National Laboratory on Long Island and at the Super Proton Synchrotron (SPS) at CERN in Geneva, Switzerland.

The PHENIX experiment at RHIC uses high energy collisions of polarized protons to study the spin-dependent quark-structure and gluon-structure of the proton. Grosse Perdekamp served as deputy spokesperson for PHENIX and led a team of American, Korean, Japanese and Chinese institutions in upgrading PHENIX trigger detectors and electronics for the study of proton spin-structure at the highest collision rates at RHIC. Using this instrumentation, he and his collaborators carried out measurements using rare W-bosons and high momentum neutral pions as probes for spin distributions of quarks, anti-quarks, and gluons inside the proton.

At the High Energy Accelerator Research Organization (KEK) in Tsukuba, Japan, Grosse Perdekamp used electron-positron annihilation into pairs of quarks and anti-quarks with subsequent fragmentation into jets of hadrons to study spin effects in the formation of hadrons from quarks. The measurements revealed correlations between the azimuthal distributions of hadrons in jets and the original quark spin. These correlations, first predicted by John Collins, have far-reaching implications: they serve as analyzers for transverse quark spin inside the proton in high energy proton-proton or electron-proton collision experiments at RHIC, the Deutsches Elektronen Synchrotron (DESY), CERN and the Jefferson Laboratory.

In a follow-up effort, Grosse Perdekamp and his Illinois colleagues Jen-Chieh Peng, Naomi Makins and Caroline Riedl, have joined the COMPASS collaboration at CERN, where the SPS provides a unique negative pion beam. Scattering this beam of transversely polarized proton targets makes it possible to explore correlations between transverse proton spin and transverse quark momentum. A measurement of these correlations will shed first light on the orbital motion of quarks in the proton.

Grosse Perdekamp received his diplom in physics from Freiburg University in 1990, and his doctoral degree in physics from the University of California, Los Angeles, in 1995. He was an associate research scientist at Yale University from 1995 to 1998, and a research scientist at Johannes Gutenberg University in Mainz, Germany, from 1998 to 1999. In 2002, he was a RIKEN Fellow at RHIC. He joined the faculty at Physics Illinois in 2002, remaining a Fellow at RIKEN through 2007. He received the Xerox Research Award in 2008 and was named a Willett Faculty Scholar in 2010. In 2013, when he was promoted to full professor, he was one of four scholars selected by the U. of I. Campus Committee on Promotion and Tenure for the Campus Distinguished Promotion Award.

Grosse Perdekamp was nominated for Fellowship by APS’s Division of Nuclear Physics. The citation reads: “For a leadership role in spin physics at RHIC and the measurement of the novel Collins fragmentation functions at Belle.” 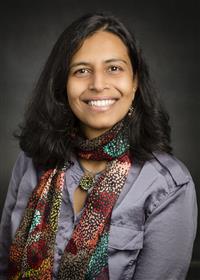 Madhavan received her bachelor’s degree in metallurgical engineering in 1991 from the Indian Institute of Technology, Chennai, and a master of technology degree in solid state materials in 1993 from the Indian Institute of Technology, New Delhi. She held a postdoctoral appointment at the University of California, Berkeley from 1999 to 2002, before joining the physics faculty at Boston College in 2002. She received an NSF CAREER Award in 2007. Madhavan joined the faculty at Illinois in 2014.

Madhavan was nominated for Fellowship by APS’s Division of Condensed Matter Physics. The citation reads: “For major contributions to the study of topological phases of electronic matter using advanced spectroscopic imaging STM.” 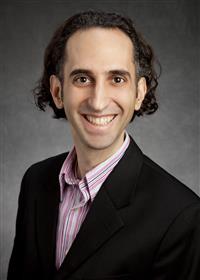 Professor Brian DeMarco
Brian DeMarco's research program in atomic-molecular-optical physics at the U. of I. focuses on solving outstanding problems in condensed matter physics using ultra-cold atoms trapped in an optical lattice. This approach—using one quantum system to emulate another—is known as quantum simulation and was first proposed as a potentially revolutionary technique by Richard Feynman.  DeMarco’s research centers on understanding models of strongly correlated materials, such as high-temperature superconductors. Current research problems being tackled by his team include the properties of the disordered Hubbard models and thermometry and cooling in strongly correlated lattice systems.

DeMarco received his bachelor’s degree in physics with a mathematics minor from the State University of New York at Geneseo in 1996, graduating summa cum laude. He earned his doctoral degree in physics from the University of Colorado Boulder in 2001, where he created the first atomic Fermi gas. He completed his postdoctoral work at the National Institute of Standards and Technology, Boulder, before joining the faculty at Physics Illinois in 2003. His work has been recognized by numerous honors. In 1999 as a graduate student, he earned the first JILA Scientific Achievement Award.  In 2002, the same work earned him the American Physical Society's Division of Atomic, Molecular, and Optical Physics Thesis Award. DeMarco is the recipient of an NSF CAREER award, ONR Young Investigator award, and a Sloan Foundation Fellowship. In 2012, he received the Engineering at Illinois Dean’s Award for Excellence in Research, and in 2013 was selected as a Willett Faculty Scholar. He has served on the DAMOP Executive Committee and the review panel for NRC postdoctoral fellowships, and currently serves on the National Academy of Science's Committee on Atomic, Molecular, and Optical Physics (CAMOS), NASA’s Fundamental Physics Science Standing Review Board, and is a current member of the national Defense Science Study Group.

DeMarco was nominated for Fellowship by APS’s Division of Atomic, Molecular & Optical Physics. The citation reads: “For the pioneering use of ultracold gases in optical lattices as quantum simulators to study disordered condensed matter systems.”

APS is a non-profit membership organization working to advance and diffuse the knowledge of physics through its research journals, scientific meetings, education, outreach, advocacy, and international activities. The society has over 51,000 members, including physicists in academia, national laboratories, and industry in the United States and throughout the world.