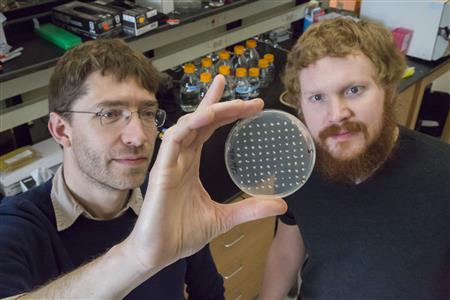 Physics Illinois Asst. Professor Seppe Kuehn works with graduate student David T. Fraebel in the Kuehn laboratory in the Center for the Physics of Living Cells, at Loomis Laboratory of Physics in Urbana. Photo by L. Brian Stauffer, University of Illinois at Urbana-Champaign.
Organisms in nature adapt and evolve in complex environments. For example, when subjected to changes in nutrients, antibiotics, and predation, microbes in the wild face the challenge of adapting multiple traits at the same time. But how does evolution unfold when, for survival, multiple traits must be improved simultaneously?

While heritable genetic mutations can alter phenotypic traits and enable populations to adapt to their environment, adaptation is frequently limited by trade-offs: a mutation advantageous to one trait might be detrimental to another.

Because of the interplay between the selection pressures present in complex environments and the trade-offs constraining phenotypes, predicting evolutionary dynamics is difficult.

Researchers at the University of Illinois at Urbana-Champaign have shown how evolutionary dynamics proceed when selection acts on two traits governed by a trade-off. The results move the life sciences a step closer to understanding the full complexity of evolution at the cellular level.

Seppe Kuehn, an assistant professor of physics and member of the Center for the Physics of Living Cells at the U. of I., led the research. The team studied populations of the bacterium Escherichia coli, which can undergo hundreds of generations in a single week, providing ample opportunity to study mutations and their impact on heritable traits.

The team selected populations of E. coli for faster migration through a porous environment. A quantitative model revealed that populations could achieve the fastest migration by improving two traits at once —swimming speed and growth rate (cell division).

Kuehn explains, “This study sheds new light on how evolution proceeds when performance depends on two traits that are restricted by a trade-off. Though a mathematical model suggests that the fastest migrating populations should be composed of cells that swim fast and reproduce quickly, what we found was that populations achieve faster migration through two divergent evolutionary paths that are mutually exclusive: in other words, these populations improved in either swimming speed or reproduction rate, but not both.”

David T. Fraebel, a U. of I. graduate student in Kuehn’s lab group, is lead author on the study. He comments, “Most experiments apply selection pressure to optimize a single trait, and trade-offs are observed in this context due to decay of traits that aren’t being selected rather than due to compromise between multiple pressures. We selected for swimming and growth simultaneously, yet E. coli was not able to optimize both traits at once.”

A 3-D graph depicting evolutionary trajectories constrained by a phenotypic trade-off. Image by David T. Fraebel, U. of I. Department of Physics and Center for the Physics of Living Cells.
The selection environment created by the team determined which evolutionary trajectory the populations followed. In a nutrient-rich medium, faster swimming meant slower reproduction; in a nutrient-poor environment, however, slower swimming and faster reproduction led to the same desired outcome: faster migration through the porous environment.

By sequencing the DNA of the evolved populations, the team identified the mutations responsible for adaptation in each condition. When they genetically engineered these mutations into the founding strain, these cells demonstrated faster migration and the same phenotypic trade-off as the evolved strains.

“Other recent studies have shown that microevolution is dominated by changes in negative regulatory elements. The reason: it’s statistically easy to find a mutation that breaks things versus one that builds new function or parts. When selection acts on two traits restricted by a trade-off, the phenotype evolves in the direction of breaking negative regulatory elements, because it’s an easy path statistically. It relates to the availability of useful mutations.”

Kuehn summarizes the finding’s value: “Improving predictive modeling of evolution will involve understanding how mutations alter the regulation of cellular processes and how these processes are related to trade-offs that constrain traits. Uncovering the general principles that define the relationship between regulation and trade-offs could enable us to predict evolutionary outcomes.”

These findings are published in the online journal eLife.

This research was supported by the National Science Foundation (NSF) through the Center for the Physics of Living Cells, an NSF Physics Frontiers Center