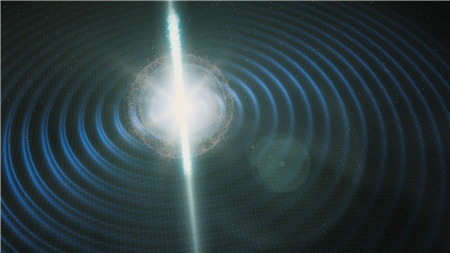 Artist's rendition of colliding neutron stars creating gravitational waves and a kilonova. Image: Fermilab.
A team of scientists using the Dark Energy Camera (DECam), the primary observing tool of the Dark Energy Survey (DES), was among the first to observe the fiery aftermath of a recently detected burst of gravitational waves, recording images of the first confirmed explosion from two colliding neutron stars ever seen by astronomers.

Scientists on the DES joined forces with a team of astronomers based at the Harvard-Smithsonian Center for Astrophysics (CfA) for this effort, working with observatories around the world to bolster the original data from DECam. Images taken with DECam captured the flaring-up and fading over time of a kilonova – an explosion similar to a supernova, but on a smaller scale – that occurs when collapsed stars (called neutron stars) crash into each other, creating heavy radioactive elements.

This particular violent merger, which occurred 130 million years ago in a galaxy near our own (NGC 4993), is the source of the gravitational waves detected by the Laser Interferometer Gravitational-Wave Observatory (LIGO) and the Virgo collaborations on Aug. 17. This is the fifth source of gravitational waves to be detected---the first one was discovered in September 2015, for which three founding members of the LIGO collaboration were awarded the Nobel prize in physics two weeks ago. 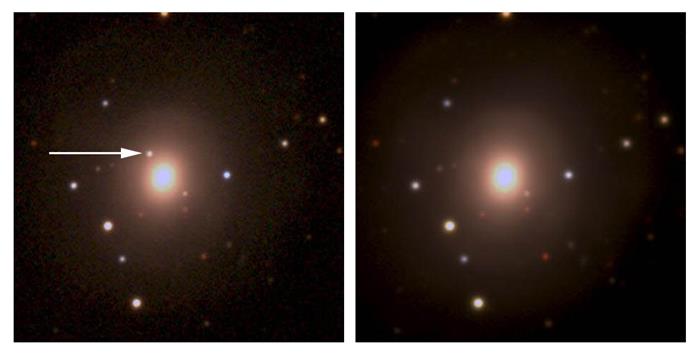 The image on the left shows the kilonova (just above and to the left of the brightest galaxy) recorded by the Dark Energy Camera. The image on the right was taken several days later and shows that the kilonova has faded. Image: Dark Energy Survey
This latest event is the first detection of gravitational waves caused by two neutron stars colliding, and thus the first one to have a visible source. The previous gravitational wave detections were traced back to binary black holes, which cannot be seen through telescopes. This neutron star collision occurred relatively close to home, so within a few hours of receiving the notice from LIGO/Virgo, scientists were able to point telescopes in the direction of the event and get a clear picture of the light.

“This is beyond my wildest dreams,” said Marcelle Soares-Santos, formerly of the U.S. Department of Energy’s Fermi National Accelerator Laboratory and currently of Brandeis University, who led the effort from the Dark Energy Survey side. “With DECam we get a good signal, and we can show how it is evolving over time. The team following these signals is a well-oiled machine, and though we did not expect this to happen so soon, we were ready for it.”

The Dark Energy Camera is one of the most powerful digital imaging devices in existence. It was built and tested at Fermilab, the lead laboratory on the Dark Energy Survey, and is mounted on the National Science Foundation’s 4-meter Blanco telescope, part of the Cerro Tololo Inter-American Observatory in Chile, a division of the National Optical Astronomy Observatory. The DES images are processed at the National Center for Supercomputing Applications at the University of Illinois at Urbana-Champaign.

Texas A&M University astronomer Jennifer Marshall was observing for DES at the Blanco telescope during the event, while Fermilab astronomers Douglas Tucker and Sahar Allam were coordinating the observations from Fermilab's Remote Operations Center. “It was truly amazing,” Marshall said. “I felt so fortunate to be in the right place at the right time to help make perhaps one of the most significant observations of my career.”

The kilonova was first identified in DECam images by Ohio University astronomer Ryan Chornock, who instantly alerted his colleagues by email. “I was flipping through the raw data and I came across this bright galaxy, and saw a new source that was not in the reference image (taken previously),” he said. “It was very exciting.”

Once the crystal clear images from DECam were taken, a team led by Professor Edo Berger, from CfA, went to work analyzing the phenomenon using several different resources. Within hours of receiving the location information, the team had booked time with several observatories, including NASA’s Hubble Space Telescope and Chandra X-ray Observatory.

LIGO/Virgo works with dozens of astronomy collaborations around the world, providing sky maps of the area where any detected gravitational waves originated. The team from DES and CfA had been preparing for an event like this for more than two years, forging connections with other astronomy collaborations and putting procedures in place to mobilize as soon as word came down that a new source had been detected. The result is a rich data set that covers “radio waves to X-rays to everything in between,” Berger said.

“This is the first event, the one everyone will remember,” Berger said. “I’m extremely proud of our entire group, who responded in an amazing way. I kept telling them to savor the moment. How many people can say they were there at the birth of a whole new field of astronomy?”

Adding to the excitement of this observation, this latest gravitational wave detection correlates to a burst of gamma rays spotted by NASA’s Fermi Gamma-ray Space Telescope. Combining these detections is like hearing thunder and seeing lightning for the very first time, and it opens up a world of new scientific discovery.

“Each of these – the gravitational waves from merging neutron stars, the gamma ray burst and the optical counterpart – could have been separate ground-breaking discoveries, and each could have taken many years,” said Daniel Holz of the University of Chicago, who works on both the DES and LIGO collaborations.  “In less than a day, we did it all. This has required many different communities working together to make it all happen. It’s so gratifying to have it be so successful.”

This event also provides a completely new and unique way to measure the present expansion rate of the universe, the Hubble constant, something theorized by Holz and others. Just as astrophysicists use supernovae as “standard candles” (objects of the same intrinsic brightness) to measure cosmic expansion, kilonovae can be used as “standard sirens” (objects of known gravitational wave strength).

LIGO/Virgo can use this to tell the distance to these events, while optical follow-up from DES and others determines the redshift or recession speed; their combination enables scientists to determine the present expansion rate. This new kind of measurement will assist the Dark Energy Survey in its mission to uncover more about dark energy, the mysterious force accelerating the expansion of the universe.

“The Dark Energy Survey team has been working with LIGO for more than two years, refining their process of following up gravitational wave signals,” said Fermilab Director Nigel Lockyer. “It is immensely gratifying to be on the front lines of a discovery this significant, one that required the combined skills of many supremely talented people in many fields.”

The Dark Energy Survey recently began the fifth and final year of its quest to map an area of the southern sky in unprecedented detail. Scientists on DES will use this data to learn more about the effect of dark energy over eight billion years of the universe’s history, in the process measuring 300 million galaxies, 100,000 galaxy clusters and 3,000 supernovae.

A paper describing the DECam discovery of the optical counterpart was recently accepted for publication in The Astrophysical Journal. A preprint is available here (LINK TK).

“It is tremendously exciting to experience a rare event that transforms our understanding of the workings of the universe,” says France A. Córdova, director of the National Science Foundation (NSF), which funds LIGO and supports the observatory where DECam is housed. “This discovery realizes a long-standing goal many of us have had, that is, to simultaneously observe rare cosmic events using both traditional as well as gravitational-wave observatories. Only through NSF’s four-decade investment in gravitational-wave observatories, coupled with telescopes that observe from radio to gamma-ray wavelengths, are we able to expand our opportunities to detect new cosmic phenomena and piece together a fresh narrative of the physics of stars in their death throes.”

The Dark Energy Survey is a collaboration of more than 400 scientists from 26 institutions in seven countries. Funding for the DES Projects has been provided by the U.S. Department of Energy Office of Science, U.S. National Science Foundation, Ministry of Science and Education of Spain, Science and Technology Facilities Council of the United Kingdom, Higher Education Funding Council for England, ETH Zurich for Switzerland, National Center for Supercomputing Applications at the University of Illinois at Urbana-Champaign, Kavli Institute of Cosmological Physics at the University of Chicago, Center for Cosmology and AstroParticle Physics at Ohio State University, Mitchell Institute for Fundamental Physics and Astronomy at Texas A&M University, Financiadora de Estudos e Projetos, Fundação Carlos Chagas Filho de Amparo à Pesquisa do Estado do Rio de Janeiro, Conselho Nacional de Desenvolvimento Científico e Tecnológico and Ministério da Ciência e Tecnologia, Deutsche Forschungsgemeinschaft, and the collaborating institutions in the Dark Energy Survey, the list of which can be found at www.darkenergysurvey.org/collaboration.

Cerro Tololo Inter-American Observatory, National Optical Astronomy Observatory, is operated by the Association of Universities for Research in Astronomy (AURA) under a cooperative agreement with the National Science Foundation.

Fermilab is America’s premier national laboratory for particle physics and accelerator research. A U.S. Department of Energy Office of Science laboratory, Fermilab is located near Chicago, Illinois, and operated under contract by the Fermi Research Alliance LLC, a joint partnership between the University of Chicago and the Universities Research Association, Inc. Visit Fermilab’s website at www.fnal.gov and follow us on Twitter at @Fermilab.

The DOE Office of Science is the single largest supporter of basic research in the physical sciences in the United States and is working to address some of the most pressing challenges of our time. For more information, please visit science.energy.gov.