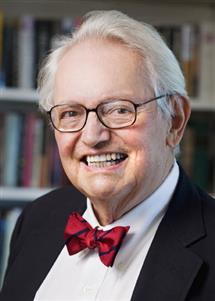 Emeritus Professor of Physics Charles P. Slichter
With each passing year, scientists working at the leading edge of fundamental science take strides forward, pushing against the boundary of the yet undiscovered. With each new glimmer of understanding uncovered, illuminating some aspect of why our world is what it is, the boundary shifts—and new questions also come to light. But it’s largely in retrospect that we discern how particular strides into the unknown opened entirely new directions in scientific research.

The American Chemical Society (ACS), through its Division of History of Chemistry, has an award that acknowledges these greatest of strides: the Chemical Breakthrough Awards are presented annually in recognition of “seminal chemistry publications, books, and patents that have been revolutionary in concept, broad in scope, and long-term in impact.” These awards are made to the department where the breakthrough occurred, not to the individual scientists or inventors.

This year, the ACS honored the discovery of “J-coupling” (also known as spin-spin coupling) in liquids, a breakthrough that enabled scientists to use Nuclear Magnetic Resonance (NMR) spectroscopy to identify atoms that are joined by a chemical bond and so to determine the structure of molecules. 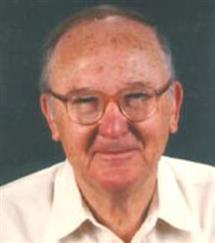 The late Emeritus Professor of Chemistry Herbert S. Gutowsky
The discovery occurred 60 years ago at the University of Illinois at Urbana-Champaign and is the work of the late Herbert S. Gutowsky (1919-2000), an emeritus professor and former head of the U of I Department of Chemistry; the late David W. McCall (1928-2002), a former director of chemical research at AT&T Bell Laboratories in Murray Hill; and Charles P. Slichter, a U of I emeritus professor of physics.

The citation reads: “For first observation of spin-spin coupling, in liquids, a crucial step in transforming NMR spectroscopy into one of the most powerful tools in chemical science.”

The groundbreaking work was published in 1951—very early in the scientists’ careers—in the journal Physical Review [84, 589], in the article “Coupling among Nuclear Magnetic Dipoles in Molecules.”

Slichter and Gutowsky had attended graduate school at Harvard together. In 1951, only three years had passed since Gutowsky had received his PhD degree, and just two years since Slichter had received his. Each would eventually receive the National Medal of Science for their pioneering application of NMR to the study of the structure of matter, Gutowsky in 1976 and Slichter in 2007 (among numerous other recognitions in their long, highly productive careers). 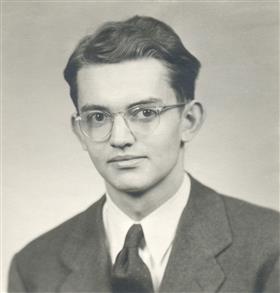 Portrait of a young Charles P. Slichter, dated around 1948. 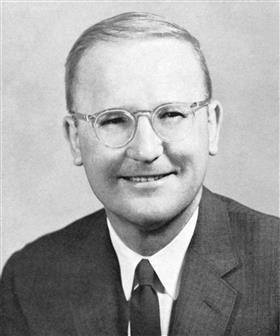 Portrait of a young Herbert S. Gutowsky, undated.
Martin Gruebele, the James R. Eiszner Endowed Chair in Chemistry and current head of department, comments, “The paper is one of two or three key papers in the history of NMR spectroscopy that turned the technique from a curiosity into a method for determining the structure of molecules.”

“The magnetic fields of two atoms connected by just a few bonds influence how the atoms absorb radio waves,” Gruebele explains. “The resulting pattern of peaks in a spectrum of radio waves (in the 100s MHz range, just like the FM dial on your radio at 101.1 FM for WILL) at one glance tell a chemist how many atoms of a given kind there are.”

On October 6, 2017, the U of I Department of Chemistry celebrated the Chemical Breakthrough Award with a well-attended reception. Slichter, having been asked to share the history behind his collaboration with Gutowsky and McCall, prepared an account with the help of his wife, Anne FitzGerald Slichter, who read it at the reception. (Slichter’s own modesty in the framing of this history is typical of him, as his physics colleagues would attest.)

Herb Gutowsky was an amazing scientist. Today’s recognition singles out only one of his many accomplishments, the discovery of “J coupling” which enables one to identify atoms that are joined by a chemical bond.

My formal background as a chemist is a one-semester college-level beginners course that I took at Cal Berkeley in the summer of 1941 just after graduating from high school.

But I had the good fortune to be around many chemists during the Second World War to work on a project headed by E Bright Wilson that was populated by a number of very talented chemists, including Bob Cole (of the Cole-Cole plots), George Frankel, Bill Schneider, Al Redfield (who was then in high school), and Don Hornig. That contact taught me great respect for chemists and chemistry.

But my deepest education in chemistry was by Herb, and his students.

Herb and I met in 1946 when we were both graduate students at Harvard. Herb and my brother Bill were both students of the renowned physical chemist George Kistiakowsky.

My thesis advisor was Edward Purcell, who, in 1945, had led the Harvard group that invented Nuclear Magnetic Resonance.

I was Purcell’s third student.

His first was the Dutch student, Nicholaas Bloembergen who studied the hydrogen NMR signal from liquids.

Purcell’s second student was George Pake who, for his thesis, studied water frozen in solids.

Pake discovered that the proton signal from water of hydration was a doublet arising from the magnetic dipolar interaction between the two protons in the water molecule. From the splitting frequency of the doublet, he found he could determine the H-H distance and orientation.

A few days after this discovery, Purcell went to the Harvard Faculty Club for lunch where he happened to encounter Kistiakowsky. Purcell told him about Pake’s finding. Kistiakowsky immediately asked if one might be able to use hydrogen NMR to solve a problem of long standing, the structure of diborane (H2B6). He asked if Herb could join Pake to try the experiment.

They did not succeed in finding the structure of diborane but Herb learned how to use an NMR apparatus, and recognized its power.

Herb came to Illinois in 1948. At that time no company manufactured NMR apparatus. In an act of great insight, imagination, and courage, Herb resolved to enter the field of nuclear magnetic resonance. With the help of an electrical engineering student, Herb built an NMR apparatus, and embarked on a program of NMR studies.

I got my PhD in June 1949 and that fall came to Illinois with the rank of Instructor in physics. Herb now had an NMR apparatus and was hard at work with it.

In spring 1950 Herb came over to the physics building to tell me that he had discovered NMR evidence that the atoms of solid metallic Na were rapidly diffusing in space. From the temperature dependence, he could determine the barrier height for diffusion of the Na atoms.

Next, he studied 19F chemical shifts in diatomic molecules and found that the fluorine chemical shift was a simple function of the electro negativity difference between the fluorine and the second atom to which it was bonded. I was stimulated to give an explanation. It was published in 1954 with Herb’s student Apollo Saika.

Then he came to tell me about his work with Dave McCall on 19F and 31P splittings in molecules containing both 19F and 31P atoms. There were a number of competing theories.

Stimulated by the work that I later published (with Saika), Herb, Dave, and I came up with an explanation. It constitutes the paper we honor today.

Shortly thereafter, Purcell and Ramsey gave an explanation that filled in the details.

In 1952, the Swedish Academy Awarded the Nobel Prize to Purcell and Felix Bloch. In his Nobel Lecture, among other things, Purcell cites the discovery of J coupling. So Herb and this paper played a role in the selection of NMR for the Nobel Prize.

The 2017 ACS Chemical Breakthrough Award is on display at the U of I Chemistry Library in Noyes Laboratory. 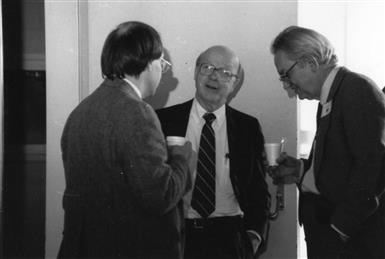 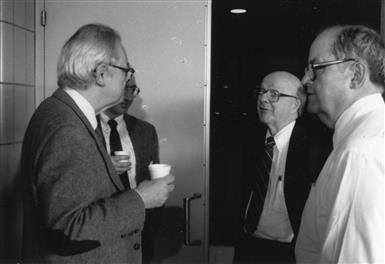 L-R: Charles Slichter, David McCall, and William Slichter (Charles' brother) converse at meeting, undated. Department of Physics, University of Illinois at Urbana-Champaign, courtesy of Emilio Segrè Visual Archives of the American Institute of Physics
If you have questions about the Department of Physics or ideas for other stories, contact Siv Schwink, 217.300.2201