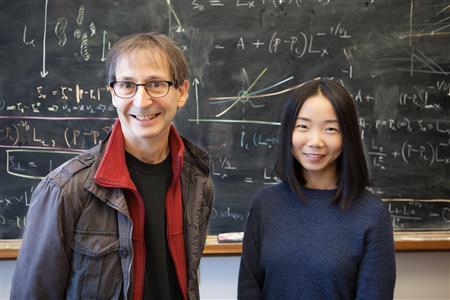 U of I Swanlund Professor of Physics Nigel Goldenfeld (left) works with colleague Chi Xue (right) at the Carl R. Woese Institute for Genomic Biology. Photo credit: University of Illinois at Urbana-Champaign.
There is remarkable biodiversity in all but the most extreme ecosystems on Earth. When many species are competing for the same finite resource, a theory called competitive exclusion suggests one species will outperform the others and drive them to extinction, limiting biodiversity. But this isn’t what we observe in nature. Theoretical models of population dynamics have not presented a fully satisfactory explanation for what has come to be known as the diversity paradox.

Now researchers at the Carl R. Woese Institute for Genomic Biology at the University of Illinois at Urbana-Champaign have shed new light on this fundamental question in ecology, by improving a popular proposed scenario for diversity known as “Kill the Winner.” Chi Xue and Nigel Goldenfeld, supported by the NASA Astrobiology Institute for Universal Biology, which Goldenfeld directs, approached the diversity paradox from the perspective of non-equilibrium statistical mechanics.

Goldenfeld and Xue developed a stochastic model that accounts for multiple factors observed in ecosystems, including competition among species and simultaneous predation on the competing species. Using bacteria and their host-specific viruses as an example, the researchers showed that as the bacteria evolve defenses against the virus, the virus population also evolves to combat the bacteria. This “arms race” leads to a diverse population of both and to boom-bust cycles when a particular species dominates the ecosystem then collapses—the so-called “Kill the Winner” phenomenon. This coevolutionary arms race is sufficient to yield a possible solution to the diversity paradox.

Goldenfeld and Xue looked at a classic example of the diversity paradox from marine biology, the paradox of the plankton. In observed marine ecosystems, many plankton species and bacterial strains coexist and have high diversity.

Goldenfeld explains, “There any many tentative hypotheses to solve the paradox. The one we are interested in is the ‘Kill the Winner’ (KtW) hypothesis. In a nutshell, it says that the problem with the diversity paradox is the assumption of a steady state. A real ecosystem is never in a steady state, but undergoes population fluctuations due to the interplay between predators and prey.

“Take for example competing strains of bacteria, each of which is prey to a host-specific virus. In this scenario, as soon as a particular bacterial species starts to dominate in the ecosystem, the virus (or bacterial phage) that preys preferentially on that host will have plenty of targets, and so will proliferate, culling the host-bacteria population. After this viral attack, another bacterial species may emerge as the most abundant for a time, until its population is likewise diminished by its bacterial phage. This host-specific predation maintains the coexistence of competing species by preventing a winner from emerging, so that in a sense, species go through boom-bust cycles of abundance.”

“Moreover,” Xue adds, “in a system where plankton compete with bacteria for a resource, a protozoan group that hunts down all bacterial strains non-selectively suppresses the population of the entire bacterial community and thus leaves space for plankton species to survive. The KtW idea works on two layers here: the coexistence of bacteria and plankton as the first layer, and the coexistence of bacterial strains as the second. It’s a very appealing theory and has become one of the most influential ideas in marine ecology.”

However, the original formulation of KtW required a widely-used technical simplification. Xue points out, “The original KtW model did not account for spatial variations or any fluctuation effects, and was formulated in terms of continuous biomass concentrations and deterministic ordinary differential equations. The significance of this is that it incorrectly accounts for what happens when viruses attack bacteria, for example. In this formulation, the population of bacteria in a region of space can get smaller and smaller during viral predation, but never reaches zero. In a sense, the theory allows the number of bacteria to be a fraction, when in reality it must be an integer like zero, one, two, etc. So the theory under-estimates what happens during viral attack, and in particular cannot capture extinction.”

To go beyond the simplified model, Xue and Goldenfeld developed a stochastic model of bacteria-virus interactions that could describe population fluctuations, in order to see whether the KtW scenario really emerged from calculations more detailed than those undertaken previously.

Their model described the outcome of the bacteria-virus encounters using a method similar to that used in statistical thermodynamics to describe colliding atoms in a gas. Just as one can compute the properties of gases—such as sound waves and thermal effects—from understanding the atomic collisions, Xue and Goldenfeld used statistical mechanics methods to compute the behavior of populations from understanding bacteria-virus encounters.

Goldenfeld explained that the KtW scenario was not put into their calculations by hand. Their goal was to model the bacteria-virus interactions at an individual level to see if KtW emerged. However, from their simulations, Xue and Goldenfeld were surprised to find that the species in their model didn’t even co-exist let alone exhibit KtW dynamics—they were driven to extinction!

Xue noted, “The breakdown of the original KtW model in the presence of stochasticity was a surprise to us. Stochasticity represents something closer to the randomness of nature. We hadn't expected this very reasonable model to fail.”

The researchers realized that there is another way in which ecosystems are not in a steady state, separate from the population fluctuations that they had attempted to model. Real ecosystems are also evolving. Indeed, when they also included coevolution into their model, the model recapitulated the biodiversity observed in nature.

Goldenfeld describes, “In the case of the ecosystem in our marine biology example, there is coevolution of each bacteria strain and its host-specific virus as they compete in what can be described as an arms race. As the bacteria find ways to evade the attack of viruses, the viruses evolve to counter the new defenses. In this coevolving KtW model, the arms race is driven by mutations that arise in both bacterial and viral strains.”

Xue adds, this idea has support from genomics. “Researchers, especially in marine microbial ecology, have found that different bacterial strains show strong variation in regions of their genomes that are believed to be associated with phage resistance. This observation links the diversity of bacterial genomes to the virus predation and agreed with our coevolving KtW framework.”

“And the extinction issue can now be avoided,” Xue continues. “When a strain goes extinct, it, or something close to it, can still reemerge later as a mutant from another strain. This co-evolutionary mechanism acts in addition to spatial heterogeneity, which also helps diversity: if a particular strain becomes extinct in a particular region of space, it is possible that it can be re-seeded by the migration or diffusion of that strain from somewhere else. Thus, at long time scales, the diversity of the system is maintained.”

Goldenfeld says it was satisfying to see how the use of stochastic modeling enabled the team to include the already well-known coevolutionary arms race within a simple model, from which emerged Kill-the-Winner dynamics.

“The KtW model is a profoundly important idea,” he asserts, “but it needs to be supplemented by additional factors such as co-evolution and spatial variation. Our work demonstrates the breakdown of the simplest but most widely used version of the theory and presents a way to restore its explanatory power. It’s exciting that our theoretical model not only captured the diversity that we were trying to explain, but also is consistent with a seemingly disconnected strand of data from the field of genomics, thus providing a satisfying narrative that works from the level of ecosystems down to the genome itself.”

Goldenfeld and Xue plan to pursue this line of inquiry further. They speculate that diversity is generally related to how far away an ecosystem is from equilibrium. Future work will attempt to quantify the relationship between diversity and the distance from equilibrium.

The results of this theoretical study are in principle testable in experiments:

“I am most excited about the possibility that the coevolving KtW model can be tested by conducting experiments with coevolving bacteria and phages,” Xue comments. “The short reproduction time and high mutation frequency make microbial systems a good candidate to test models in which evolutionary and ecological dynamics happen at the same time scale.”

The researchers’ interest in this problem arose from a seemingly different area of science. Goldenfeld explains that this work has implications for open questions in astrobiology and for detecting life on extraterrestrial worlds.

“The diversity of ecosystems, especially microbial ones, is a key factor in understanding the likelihood that life can gain enough of a toehold in a planetary environment not only to survive, but also to be detectable. With the groundbreaking discovery by the Cassini mission of global oceans of liquid water on Europa (moon of Jupiter) and Enceladus (moon of Saturn), marine microbial ecology is poised to become an even more active component of astrobiology. Understanding the fundamental mechanisms driving biodiversity—a pervasive feature of terrestrial ecosystems—will help us predict the observability of non-terrestrial life on worlds that will be within reach of our probes in the coming decades.”

This work was supported by the National Aeronautics and Space Administration Astrobiology Institute (NAI) under Cooperative Agreement No. NNA13AA91A issued through the Science Mission Directorate. C.X. was partially supported by the L.S. Edelheit Family Biological Physics Fellowship from the Department of Physics, University of Illinois at Urbana-Champaign. The conclusions presented are those of the researchers and not necessarily those of the funding agencies.