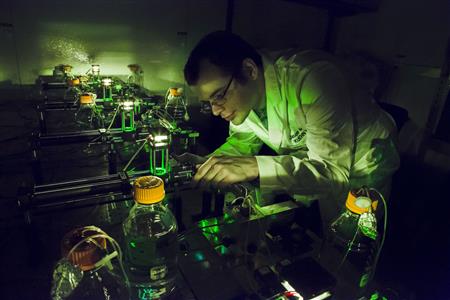 Physics graduate student Jason Merritt works on his automated bacterial population sampling device in the Kuehn Lab at the Loomis Laboratory of Physics in Urbana. Photo by L. Brian Stauffer, University of Illinois at Urbana-Champaign
Scientists at the University of Illinois at Urbana-Champaign have produced the most precise picture to date of population dynamics in fluctuating feast-or-famine conditions. Professor Seppe Kuehn, a biological physicist, and his graduate student Jason Merritt found that bacterial population density is a function of both the frequency and the amplitude of nutrient fluctuations. They found that the more frequent the feast cycles and the longer a feast cycle, the more rapid the population recovery from a famine state. This result has important implications for understanding how microbial populations cope with the constant nutrient fluctuations they experience in nature.

The team’s findings were made possible by extraordinarily precise measurements of population dynamics in bacterial communities. The measurement, based on automated imaging of hundreds of millions of single cells, allowed the team to capture population dynamics over periods of more than a week with a temporal resolution of one minute. Those numbers and the extended duration of the experiment couldn’t have happened without Merritt’s continuous-culture systems, coupled to automated-sampling fluorescence microscopes.

These findings are published in the August 28 issue of Physical Review Letters.

The experimental setup took about two years and many prototypes to develop. Merritt built six identical systems for the experiment, each one automated to continuously pump in fresh media and pump out bacterial cultures for sampling. The samples were continuously imaged to track changes in population density and structure. Software developed by Merritt automatically segments images to count bacterial cells, producing massive data sets. The software takes advantage of machine learning to resolve otherwise difficult-to-solve problems in image recognition and processing.

A graph illustrating population density as a function of the frequency and amplitude of available nutrients. Courtesy of Kuehn Lab, University of Illinois at Urbana-Champaign
Kuehn comments, “Scientists studying populations of bacteria typically take samples manually and do their counting offline, in person. What Jason’s systems do is automatically remove a sample, pass it in front of a microscope to be imaged, and then put it back. And they do that once a minute, 24 hours a day, with no input, for up to a month. His software counts the cells in the images, extracting information in real time.”

He continues, “So that’s a big step forward—this has never been achieved before. Short-timescale quantitative studies have been done using microfluidic devices, but these are limited to about three days’ runtime. We can run for 30 days, producing long-timescale highly quantitative measurements. We can easily run replicate experiments, reproducing the same results. Because of this, we were able to use the system to test hypotheses about the underlying mechanisms governing the dynamics we observed.” 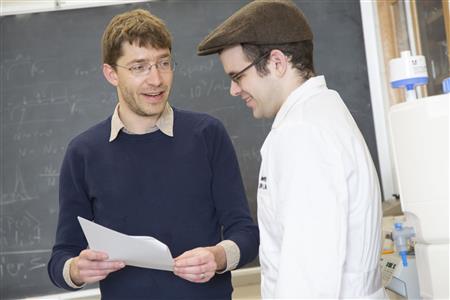 Professor Seppe Kuehn (left) and graduate student Jason Merritt confer in the Loomis Laboratory of Physics in Urbana. Photo by L. Brian Stauffer, University of Illinois at Urbana-Champaign
Merritt comments, “The idea for the system grew out of previous work Seppe had done. The device I built is basically a metal block with glass vials within it. The most important part of our system and the part that was the most difficult to get to work reliably is the coupling to a fluorescence microscope.”

The system continuously draws samples out of the liquid culture into flexible tubing and then into a thin glass capillary in the path of the microscope. The bacteria pass through the capillary many at a time, but are spaced apart from one another. The biggest challenge overall was on the software side, doing proper image segmentation to convert the images to data.

The main finding, that populations apparently recovery faster from more frequent or larger pulses of nutrients, puzzled the team at first.  However, the precision of the measurement allowed them to uncover the mechanism.

Merritt continues, “What we found out is that the fast recovery rates for the planktonic population are driven by dispersal from aggregated cells (biofilms) during feast conditions. So basically when there’s a lot of food, these cell aggregates start shedding cells rapidly, and the cells that shed off start growing rapidly. But during famine conditions when there’s not very much food, these cells start coming back together and forming the aggregates again. This is the mechanism driving the frequency and amplitude dependence.”

Kuehn adds, “Variations in a natural population may be the result of any one or a combination of many different variables—the amount of nutrients, temperature, competition and predation, etc.—so it’s difficult to measure cause and effect. In the lab, we tightly control all of the parameters of our experiment. And now we can make a really robust and reproducible quantitative measurement. Going forward, we would like to modify these systems to study topics in evolutionary history. We also plan to do studies in which we use feedback control of microbial communities, to see whether we can push the communities back into a particular state. These are studies that wouldn’t be possible without an automated system like the one we used in this study.”

This work was funded in part by the National Science Foundation Physics Frontiers Center Program. The conclusions presented are those of the researchers and not necessarily those of the funding agencies.