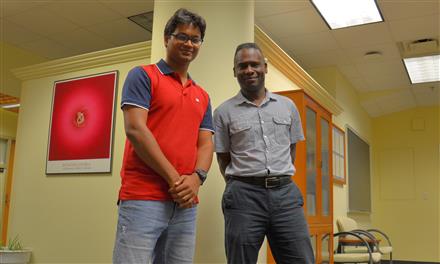 University of Illinois at Urbana-Champaign Professor of Physics Philip Phillips (right) and graduate student Bikash Padhi pose in the Institute for Condensed Matter Theory on the Urbana campus. Credit: Siv Schwink, University of Illinois at Urbana-Champaign
Recently, a team of scientists led by Pablo Jarillo-Herrero at the Massachusetts Institute of Technology (MIT) created a huge stir in the field of condensed matter physics when they showed that two sheets of graphene twisted at specific angles—dubbed “magic-angle” graphene—display two emergent phases of matter not observed in single sheets of graphene. Graphene is a honeycomb lattice of carbon atoms—it’s essentially a one-atom-thick layer of graphite, the dark, flaky material in pencils.

In two articles published online in March 2018 and appearing in the April 5, 2018 issue of the journal Nature, the team reported the twisted bilayer graphene (tBLG) exhibits an unconventional superconducting phase, akin to what is seen in high-temperature superconducting cuprates. This phase is obtained by doping (injecting electrons into) an insulating state, which the MIT group interpreted as an example of Mott insulation. A joint team of scientists at UCSB and Columbia University has reproduced the remarkable MIT results. The discovery holds promise for the eventual development of room-temperature superconductors and a host of other equally groundbreaking applications.

Researchers at the University of Illinois at Urbana-Champaign have recently shown that the insulating behavior reported by the MIT team has been misattributed. Professor Philip Phillips, a noted expert in the physics of Mott insulators, says a careful review of the MIT experimental data by his team revealed that the insulating behavior of the “magic-angle” graphene is not Mott insulation, but something even more profound—a Wigner crystal.

“People have been looking for clear examples of Wigner crystals since Wigner first predicted them in the 1930s,” Phillips asserts. “I think this is even more exciting than if it were a Mott insulator.”

Lead author of the U of I study, graduate student Bikash Padhi, explains, “When one sheet of graphene is twisted on top of another, moiré patterns emerge as a result of the offset in the honeycomb structure. By artificially injecting electrons into these sheets, the MIT group obtained novel phases of matter which can be understood by studying these extra electrons on the bed of this moiré pattern. By increasing the electron density, the MIT group observed an insulating state when two and three electrons reside in a moiré unit cell.  They argued this behavior is an example of Mott physics.”

Why can’t it be Mott physics?

Proposed Wigner crystals for magic-angle bilayer graphene. Leftmost figure, the criterion for observing this lattice structure is not satisfied experimentally, resulting in metallic transport when a single electron occupies a moiré cell. The remaining two figures show the insulating state, explaining the experimental observation when 2 or 3 electrons are in a moiré cell. Credit: Philip Phillips, University of Illinois at Ubana-Champaign
Phillips explains, “Mott insulators are a class of materials that should be conductive if electronic interactions are not taken into account, but once that’s taken into account, are insulating instead. There are two primary reasons why we suspect the tBLG does not form a Mott insulator—the observed metal-insulator transition offers only one characteristic energy scale, whereas conventional Mott insulators are described by two scales. Next, in the MIT report, in contrast to what one expects for a Mott system, there was no insulator when there was only one electron per unit cell. This is fundamentally inconsistent with Mottness.”

The accompanying figure displays the crystalline states that explain these data.

What is a Wigner crystal?

Zorbing, rolling and bouncing in an inflated transparent ball, has become popular around the world. Bikash Padhi, a University of Illinois at Urbana-Champaign graduate student in theoretical condensed matter physics, compares Wigner crystallization to swelling zorbs in a closed field, where the zorb passengers are electrons and the zorb itself is a measure of each electron's repulsion to other electrons. Credit: Username:Rodw/Wikimedia Commons/Public Domain
To understand Wigner crystals, Padhi offers this analogy: “Imagine a group of people each inside a large orb and running around in a closed room. If this orb is small they can move freely but as it grows bigger one may collide more frequently than before and eventually there might be a point when all of them are stuck at their positions since any small movement will be immediately prevented by the next person. This is basically what a crystal is. The people here are electrons, and the orb is a measure of their repulsion.”

Phillips credits Padhi with providing the impetus for the study. Chandan Setty, who was until recently a postdoctoral researcher working in Phillips' group at the Institute for Condensed Matter Theory in Urbana, also made significant contributions to the study, according to Phillips.

These results were pre-published online in the journal Nano Letters in the article, “Doped Twisted Bilayer Graphene near Magic Angles: Proximity to Wigner Crystallization not Mott Insulation,” on September 5, 2018, with the final official publication to be included in the journal’s October 2018 issue.

This research was funded by the Center for Emergent Superconductivity, a Department of Energy–funded Energy Frontier Research Center, and by the National Science Foundation. The conclusions presented are those of the researchers and not necessarily those of the funding agencies.