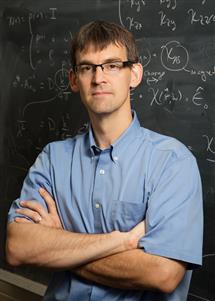 Professor Peter Abbamonte has been named the Fox Family Professor in Engineering at the University of Illinois at Urbana-Champaign. Named faculty appointments signify a distinction beyond that of professorial rank, recognizing distinguished scholars for their prominence in research, teaching, and service.

Abbamonte, an experimental condensed matter physicist, is known for developing the technique of resonant soft x-ray scattering, now in use at every major synchrotron facility in the world, and for his solution to the phase problem for inelastic x-ray scattering, permitting real-time imaging of electron motion with attosecond time resolution. In recent years, his group is best known for developing the technique of momentum-resolved electron energy-loss spectroscopy, which is the first technique capable of measuring the meV dynamic charge susceptibility of materials with quantitative momentum control.

In 2012, Abbamonte founded Inprentus, a high-tech manufacturing start-up, to address a shortfall in diffraction-grating manufacturing that was adversely affecting researchers in his field. These high-precision optics are required for research at synchrotron radiation facilities. Today, Inprentus x-ray and euv diffraction gratings are used in a variety of scientific and commercial applications in industry, at government laboratories, and at academic institutions around the world.

Inprentus was incubated at the EnterpriseWorks Research Park on the U of I campus. In February 2017, Inprentus announced it had raised $1.5 million in venture capital to build a new manufacturing facility in Champaign and “graduate” from the Research Park. Abbamonte is the tech company’s chief scientific officer.

Abbamonte is a Fellow of the American Physical Society. He has been selected for numerous honors, including a Xerox Award for Faculty Research (2010). He was named a University Scholar (2014) and a Moore Foundation EPiQS Investigator (2014–2019). He received his doctoral degree from the U of I in 1999. He completed an NSF Fellowship at University of Groningen in The Netherlands, before returning to the U.S. in 2001 as a postdoc in biophysics at Cornell University. Starting in 2003, he worked as a staff scientist at Brookhaven National Laboratory. He joined the faculty at Illinois Physics in 2005.

Fox Family Professorships support faculty members whose business experience adds value to the university and the Champaign-Urbana community. Peter B. Fox is founder of Fox Development Corp., a real-estate firm. Its subsidiary Fox Ventures has provided startup capital for technology firms at the U of I Research Park. Fox also serves as manager of Fox/Atkins Development, LLC, the developer and manager of Research Park. Together, Fox and his wife Kim Fox work to promote Champaign County’s economic development and to support its community organizations. By supporting University of Illinois faculty and research, the Fox family also helps to create job opportunities for the outstanding graduates the university produces.