A Torque on Conventional Magnetic Wisdom 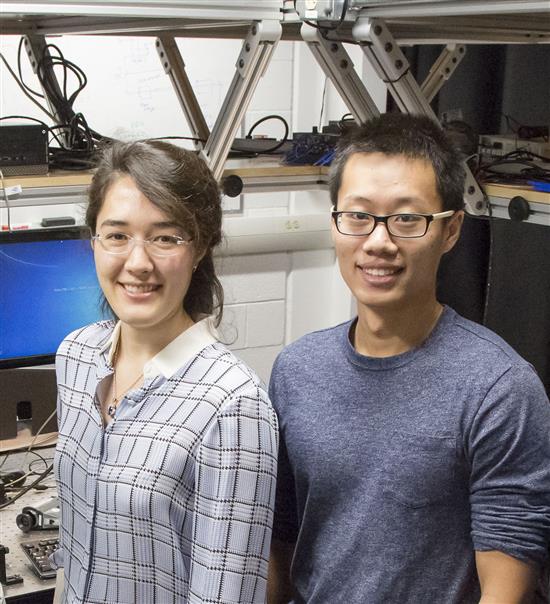 Illinois Physics Professor Virginia Lorenz and her graduate student Wenrui Wang pose in her laboratory at the Loomis Laboratory of Physics in Urbana. Photo by L. Brian Stauffer, University of Illinois at Urbana-Champaign
Physicists at the University of Illinois at Urbana-Champaign have observed a magnetic phenomenon called the “anomalous spin-orbit torque” (ASOT) for the first time. Professor Virginia Lorenz and graduate student Wenrui Wang, now graduated and employed as an industry scientist, made this observation, demonstrating that there exists competition between what is known as spin-orbit coupling and the alignment of an electron spin to the magnetization. This can be thought of as analogous to the anomalous Hall effect (AHE).

Effects like the AHE had not been found for magnetizations that point in-plane, until now.

This discovery has implications for energy-efficient magnetic-memory technology. 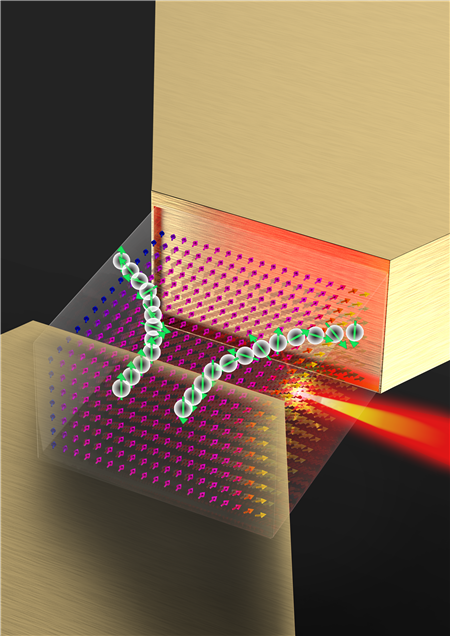 Illustration of the anomalous spin-orbit torque. When a charge current is applied parallel with the magnetization, spin-orbit interaction generates a flow of transversely polarized spin current that gives rise to anomalous spin-orbit torque (ASOT), tilting the magnetization out of plane on the left and right surfaces. This is detected via a change in laser polarization upon reflection. Credit: Jose Vazquez, ITG, Beckman Institute, University of Illinois at Urbana-Champaign
Magnetism is ubiquitous—we use it every day, for example, to stick papers to a refrigerator door or to ensure that our phone chargers do not detach prematurely.

Microscopically, magnetism arises from a collection of electrons, which all have a property known as spin. Spin is one source of angular momentum for electrons and its “movement” can be likened to how toy tops spin—though in actuality, in quantum mechanics, the motion of spin does not resemble anything in classical mechanics. For electrons, spin comes in two species, formally called up spin and down spin. Depending on how the spins collectively point, a material might be ferromagnetic, having neighboring electron spins all pointing in the same direction, or antiferromagnetic, having neighboring electron spins pointing in opposite directions. These are just two of several types of magnetism.

But what happens when magnetism is combined with other phenomena such as spin-orbit coupling?

Lorenz notes, “There is an entire family of effects that are generated from simply running an electric current through a sample and having the spins separate. The anomalous Hall effect occurs in thin ferromagnetic films and is seen as the accumulation of spins on the edges of the sample. If the magnetization points out of the plane of the film—that is, perpendicular to the plane of the sample surface—and a current flows perpendicular to the magnetization, then accumulations of spins can be seen. But this happens only if the ferromagnetic film also has spin-orbit coupling.”

Spin-orbit coupling causes the spin species—up or down—to move strictly in certain directions. As a simplistic model, from the point of view of electrons moving through a film, they can scatter to the left or right if something interrupts their movement. Interestingly, the spins are sorted based on the direction that an electron moves. If the left-scattered electrons have spin up, then the right-scattered electrons must have spin down and vice versa. Ultimately, this leads to up spins accumulating on one edge of the film and down spins accumulating on the opposite edge.

Conventional spin-orbit torque (SOT) has been found in bilayer structures of a ferromagnetic film adjacent to a metal with spin-orbit coupling.

Lorenz points out, “In the past, this has always happened with two layers. You need not just a ferromagnet, but also some source for the spins to separate to induce a change in the ferromagnet itself.”

Lorenz continues, “It was always assumed—or at least not investigated heavily—that we need these metals with a strong spin-orbit coupling to even see a change in the ferromagnet.”

The results of Wang and Lorenz’s experiment now directly challenge this assumption.

Observation of an anomalous spin-orbit torque

Wang and Lorenz found that it was unnecessary to place a metal with spin-orbit coupling adjacent to the ferromagnetic film in order to generate a SOT and observe an out-of-plane magnetization.

Wang comments, “Our work reveals a long-overlooked spin-orbit phenomenon, the anomalous spin-orbit torque, or ASOT, in well-studied metallic ferromagnetic materials such as permalloy. The ASOT not only complements the physics picture of electrical current-induced spin-orbit effects such as the anomalous Hall effect, but also opens the possibility of more efficient control of magnetism in spin-based computer memories.”

The researchers ran a current from one edge of the film to its opposite and additionally forced the magnetization of the film to point in the same direction.

Unlike the AHE, the ASOT cannot be detected electrically, so Wang and Lorenz employed MOKE measurements, shooting lasers at two exposed surfaces to show that the magnetization pointed out of the plane of the surface.

Lorenz credits her collaborator, Professor Xin Fan of the University of Denver, with conceiving of this experiment.

Fan explains, “MOKE is an effect to describe the change in polarization as the light is reflected from the surface of a magnetic material. The polarization change is directly correlated to the magnetization and light has a small penetration depth into the sample, which makes it popular to use as a surface probe for magnetization.”

But that’s not all. The researchers noted that the exchange interaction can suppress the effects of ASOT, so they carefully chose a sample that was thick enough that the spins on the two sides of the sample could not force each other to point in the same direction.

Wang and Lorenz demonstrated that on the two surfaces of the film where spins accumulate, the same Kerr rotation is observed. Technically, the Kerr rotation refers to how the reflected light changes its polarization, which is directly correlated with how the magnetization is rotated out of the plane of the permalloy film. This is indisputable evidence of ASOT.

Additional confirmation of the research findings come from theoretical work. The researchers have run simulations using their phenomenological model to show that there is strong agreement with their data. Additionally, theorist collaborators have also used density functional theory—a type of modelling that looks microscopically at atoms rather than assuming the properties of objects—to show qualitative agreement with experiment.

Lorenz notes that Stanford University Adjunct Professor and Lawrence Lab Staff Scientist Hendrick Ohldag made seminal contributions to the conception of the experiment. Lorenz says the experiment also benefited from contributions of collaborators at the Illinois Materials Research Science and Engineering Center, the University of Denver, the University of Delaware, and the National Institute of Standards and Technology in Maryland and Colorado.

Lorenz emphasizes, “What we’ve shown now is that a ferromagnet can induce a change in its own magnetization. This could be a boon to the research and development of magnetic memory technology.”