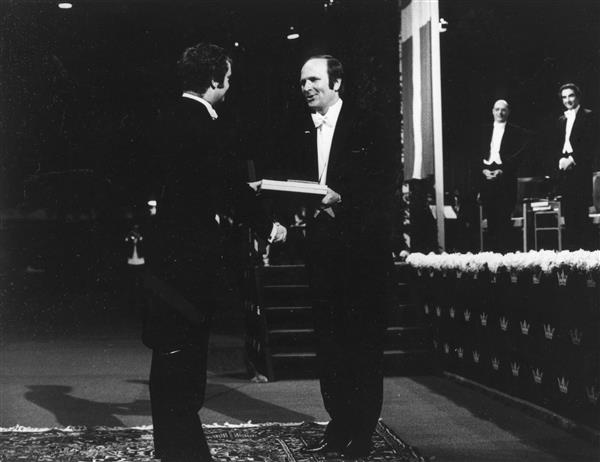 John R. Schrieffer receiving the Nobel Prize in Physics. Illinois Physics, scanned at the AIP Emilio Segrè Visual Archives
We are saddened to report that John Robert Schrieffer, Nobel laureate and alumnus of the Department of Physics at the University of Illinois at Urbana-Champaign, passed away on July 27, 2019, in Tallahassee, Florida. He was 88 years old.

Schrieffer was the “S” in the famous BCS theory of superconductivity, one of the towering achievements of 20th century theoretical physics, which he co-developed with his Ph.D advisor Professor John Bardeen and postdoctoral colleague Dr. Leon N. Cooper. At the time that Schrieffer began working with Bardeen and Cooper, superconductivity was regarded as one of the major challenges in physics. Since the discovery of the hallmark feature of superconductivity in 1911—the zero resistance apparently experienced by a current in a metal at temperatures near absolute zero—a long list of famous theoretical physicists had attempted to understand the phenomenon, including Albert Einstein, Niels Bohr, Richard Feynman, Lev Landau, Felix Bloch, Werner Heisenberg and John Bardeen himself (who was awarded the Nobel Prize for his co-invention of the transistor at around the time that Schrieffer began working with him in 1956).

The difficulty was that, unlike all other states of matter that had been understood using classical or quantum physics, superconductivity appeared to involve the balance of such small energies that it seemed impossible to be able to compute them accurately enough to explain the phenomenon. Most efforts to explain superconductivity worked with the properties of individual electrons. On top of that, experiments suggested that the electrons in a superconductor somehow were affected by the isotopic mass of the atoms in the material. In 1955, Bardeen, working with David Pines, had shown that electrons in a metal could experience a force that was not just their repulsive charged interactions, but also an attractive force that arose through their interaction with sound waves in the material. This led Cooper to propose a way out of the first difficulty: his idea was that an attractive interaction between two electrons, combined with the quantum mechanics associated with their obeying Fermi statistics, could lead to a new and subtle bound state of the electrons, loosely analogous to the way in which an electron and a proton are bound to form a hydrogen atom. Cooper’s insight suggested that one must somehow incorporate a cooperative interaction between electrons, and not treat them only individually, but it only applied to two electrons. How to extend this to the huge number of electrons in a real material was the remaining problem, and it was this problem that Schrieffer solved.

According to his own account, while riding the subway during an American Physical Society meeting in New York City between Jan 30 and Feb 2, 1957, Schrieffer realized that he could combine Cooper’s pair idea with the variational approach used by Sin-Itiro Tomonaga (later to win the Nobel Prize for the co-discovery of the theory of quantum electrodynamics) to address the so-called pion-nucleon problem in high-energy physics. On the train, Schrieffer wrote out the wave function of all the interacting electrons using quantum mechanics, together with the grand canonical distribution from statistical mechanics in order to conserve the number of electrons in the metal. The next day, he was able to use the variational method to solve what is now known as the gap equation for superconductivity, showing that Cooper’s pair idea could be extended to the entire set of electrons in the metal.

Later, Schrieffer would explain the physical intuition behind his discovery in terms of couples doing the frug, a popular dance at the time in which the dance partners are far apart but between them are many other couples. “Now, these dancing couples are essentially totally covering the dance floor. There is very little space not covered by people. So when they dance they have to do a highly intricate step of moving into a space that, at that instant, happens to be vacant. And this is enormously complicated choreography, so that one doesn't trip, if you like, or hit someone else. And the electrons can't hit each other, or at least they can't occupy the same space at the same time. Fine. So they're all dancing together. By dancing, if you like, they lower their energy or make themselves happier or whatever analogy you like to make. The wave function is just... symbols which record the dance the electrons are making.” 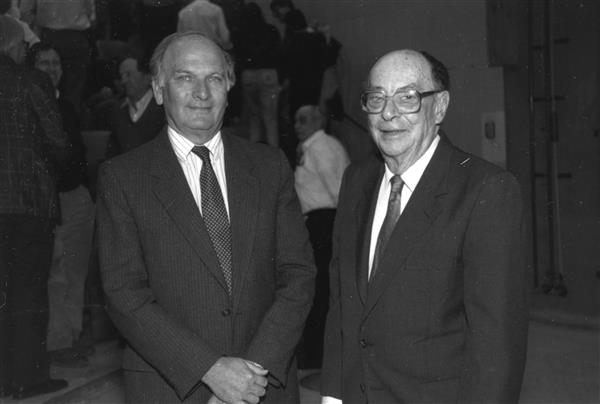 John Robert Schrieffer (left) and John Bardeen at event. Illinois Physics, scanned at the AIP Emilio Segrè Visual Archives
Schrieffer’s wave function allowed the team to calculate readily many of the properties of superconductivity that are common to all the materials known at the time, and indeed to most materials known today with the exception of the so-called high temperature superconductors and other novel exotic states of condensed matter. The BCS work also made a number of novel predictions, some of which were quickly confirmed experimentally by Charles Slichter at Illinois and others elsewhere. It has remained the foundation of our understanding of cooperative behavior in the quantum regime, applying not only to electrons in a superconductor at a few degrees above absolute zero, but to nuclei and neutron stars (where the temperature is millions to billions of degrees above absolute zero), quarks in a quark-gluon plasma, the superfluidity in 3He at a few thousandths of a degree above absolute zero and pairing in ultra-cold atoms at nano-Kelvin temperatures. Many of these extensions of the BCS theory to astrophysics and nuclear physics were carried out at Urbana by Professors David Pines, Gordon Baym, Chris Pethick, and others. 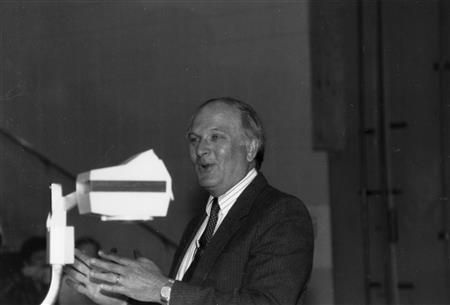 John R. Schrieffer lecturing. Illinois Physics, scanned at the AIP Emilio Segrè Visual Archives
Schrieffer’s research interests covered many aspects of condensed matter physics in addition to superconductivity, including the behavior of electrons in polyacetylene. On this topic, he pursued a seminal collaboration with Alan Heeger (who was awarded the Nobel Prize in Chemistry for his discovery of conducting polymers), and together with Wu-Pei  Su, they introduced an important model of charge dynamics along the one-dimensional polymer that yielded many beautiful predictions. The most influential of these was the concept of fractional charged excitations: emergent particles which behaved as if they had a fraction of the charge of the electron, usually regarded as the unit of charge in nature. In a creative and productive collaboration at Santa Barbara with the high-energy theorist Frank Wilczek (who also was awarded the Nobel Prize for his work on quark confinement), Schrieffer was one of the pioneers in exploring common themes between high-energy physics and condensed matter physics. The notion of fractionally charged excitations, and the model which generated them, have had an enduring influence on the field, with applications ranging from superfluid 3He (collaborative work with Tin-Lun Ho, Jose Fulco and Frank Wilczek) to the modern field of topological insulators. Similarly he was one of the pioneers in applying the concept of fractional statistics to the quantum Hall effect (with his then-student Dan Arovas and with Frank Wilczek). Schrieffer also wrote several influential papers on possible mechanisms of high-temperature superconductivity.

Bob (as he was known to his friends and colleagues) was a good friend of the Department of Physics at Illinois, interacting closely with the condensed matter group over the years, and helping many of us with our careers, both through scientific and personal interactions. His last visit to Illinois was in October 2007, on the occasion of the 50th anniversary celebration of the BCS work.

Schrieffer received many awards and honors during his career, including the Nobel Prize in Physics in 1972 and the National Medal of Science (1983). He was a member of the US National Academy of Sciences, the American Academy of Arts and Sciences and the American Philosophical Society.

In 1960, Schrieffer married Anne Grete Thomsen, whom he had first met while a postdoc in Denmark, and they had three children.