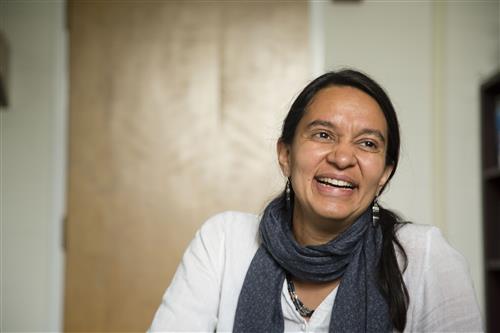 Vishveshwara is a theoretical condensed matter physicist with broad research interests in non-equilibrium and strongly correlated systems at all scales, from subatomic to cosmic. A common thread throughout her work is the characterization of emergent phenomena in quantum states of matter—including superconductivity, superfluidity, Mott insulators, topological systems, fractional quantum Hall states, and Majorana wires. In true “Urbana style,” Vishveshwara’s collaborations at Illinois and beyond, often involving close rapport with experimental colleagues, have produced viable experimental stratagems and identified clear signatures that characterize particular states of matter.

A major thrust of Vishveshwara’s research over the last few years has been at the intersection of quench dynamics and topological constraints in topologically non-trivial systems. With colleague Professor Diptiman Sen of the Indian Institute of Science, she  coined the term “parity blocking” to describe a phenomenon in the context of various systems, most notably p-wave superconductors, where the ground state parity—the evenness or oddness of particle number—oscillates due to dynamic tuning and drastically prevents the system from relaxing. This work has relevance to experimental assays of the elusive Majorana fermion, an exotic excitation with implications for quantum information science. Her group’s related work includes collaborations with the group of Illinois condensed matter experimentalist Professor Dale Van Harlingen in designing a Josephson junction based platform for “braiding” such Majorana excitations and that of Illinois cold atomic experimentalist Bryce Gadway in realizing related excitations in optical lattices.

Bridging condensed matter physics techniques with those of biological chemistry, Vishveshwara has been in active collaboration with her mother, noted computational biophysicist Saraswathi Vishveshwara of the Indian Institute of Science. Combining graph spectral analyses of protein structures with concepts from percolation theory, their results have implications for our understanding of the biological function of diseases. A recent perspective article on the topic, written by the mother-daughter duo and Saraswathi’s former student Vasundhara Gadiyaram, has appeared in a special issue of the Journal of Chemical Information and Modeling dedicated to women scientists and received coverage in the American Chemical Society news.

In addition to her active research program at Illinois, Vishveshwara maintains an outreach program that unites physics with performance, musical, and visual arts. Her two collaborative performance pieces, Quantum Voyages and Quantum Rhapsodies, portray journeys through the quantum realm. These works, which intersect with Vishveshwara’s special topics course, “Phys 498 ART: Where Art Meets Physics,” feature cameos by renowned physicists, direction by acclaimed theater-maker Latrelle Bright, and performances by the celebrated Jupiter String Quartet. Vishveshwara and her creative team have performed the works at special events on the Illinois campus and at the 2018 APS March Meeting.

Vishveshwara’s work has been recognized with several honors. She was a U of I Center for Advanced Study associate in 2018/19, a Simons Fellow in Theoretical Physics in 2012, and a National Science Foundation (NSF) American Competitiveness and Innovation Fellow in 2010. She received an NSF CAREER Award in 2007.

Vishveshwara is currently on sabbatical at the University of California, San Diego, where she is one of three inaugural Margaret Burbidge Visiting Professors. This professorship, supported by the Heising-Simons Foundation, enables outstanding women researchers in the physical sciences to pursue new research ideas and serve as mentors to the UCSD academic community.