The underground search for Majorana neutrinos: the first two years of EXO-200 data

For the last two years, scientists on the Enriched Xenon Observatory–200 experiment (EXO-200) have been searching for evidence of an extremely rare nuclear-decay process, neutrinoless double-beta decay, that—if it exists—would point to new physics beyond the standard model. The observatory comprises a tank of liquid xenon installed more than 2,000 feet below the earth’s surface in a salt formation near Carlsbad, NM: it is the most sensitive instrument of its kind in the world.

In an article published recently in the journal Nature, the collaboration shares the results of the first two years of data collection. While there's currently no evidence the neutrinoless double-beta decay takes place, the fact that it has not been detected at the current sensitivity level indicates the lower limit of the half-life of the proposed particle decay process would be at least 1025 years—around one million-billion years more than the age of the universe.

EXO-200 is a collaboration of close to 100 physicists from 7 countries and 10 US institutions, including the University of Illinois at Urbana-Champaign. The Illinois group–physics professors Liang Yang and Doug Beck along with two postdocs and two graduate students—played an important role in analyzing the first two years of data. 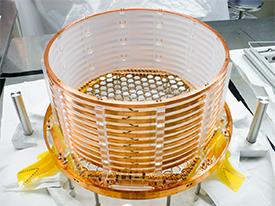 One half of the time projection chamber before being inserted in the xenon vessel: the time projection chamber detects both light and electrons that have been knocked loose from xenon atoms. Image courtesy of EXO-200 Collaboration
Although the ultimate outcome of the search is not clear, the experiment has achieved an almost threefold increase in sensitivity over their initial neutrinoless beta-decay search, the result of which was published in Physical Review Letters in 2012. This increase comes both from having more data, and from upgrades to the EXO-200 detector and software.

Graduate student Josiah Walton comments, “We do not know what the mass scale is for neutrinos, which are exceptionally small and electrically neutral elementary particles that pass through matter virtually unhindered. In addition, many extensions of the standard model of particle physics imply that neutrinos are Majorana particles—particles that are their own anti-particles. Positive observation of the extremely rare neutrinoless double-beta decay process would establish that neutrinos are Majorona and would determine the mass scale. Such a result would yield profound insights into the evolution of the universe and mechanisms for neutrino mass generation.”

“At Illinois,” Walton continues, “we've provided a deeper understanding of the EXO-200 detector and made significant improvements to the data analysis software, resulting in one of the most sensitive neutrinoless double-beta experiments and strongest limits on the half-life of the neutrinoless double-beta decay process. We will continue to strengthen and refine our results, following planned detector electronics upgrades, data analysis improvements, and further data taking.” 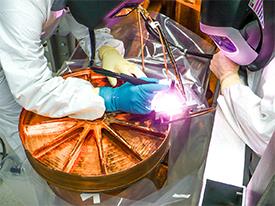 SLAC engineers Robert Conley (left) and Knut Skarpaas VIII weld the xenon vessel shut. Image courtesy of EXO-200 Collaboration
Yang adds, “Our experiment could also shed light on one of the universe’s greatest puzzles, namely, if every particle has an antiparticle, why is there an imbalance of matter vs. antimatter in the universe? Where did all of the antimatter go? If neutrinoless double beta decay exists, it would be a lepton-number violating process. This would not likely provide the entire answer to the great matter-antimatter puzzle, but it could provide a very important piece.”

The clues to neutrino mass the EXO-200 researchers are looking for are hidden in the way xenon transforms into the element barium. The isotope of xenon used by EXO-200, xenon-136, can undergo double beta decay, a process in which two neutrons decay simultaneously into two protons, and one atom of xenon moves forward two spots in the Periodic Table, landing on barium.

In one version of this process, called two-neutrino double-beta decay, all four particles from the two beta decays (two electrons and two anti-neutrinos) are emitted. EXO-200 was the first to see this in xenon-136; they published the result in Physical Review Letters in 2011.

That leaves the possibility of neutrinoless double-beta decay, the variant EXO-200 was designed to detect. In this version the two anti-neutrinos never appear. They annihilate each other before they can escape. This would confirm to researchers that neutrinos, unlike other fermions, are their own antiparticles. (The typical partners in an antimatter pair, such as electrons and positrons, have electric charge and are distinguishable; neutrinos have no charge.)

The EXO-200 collaboration originally planned to take data for three years.  However, several additional upgrades in the works promise to significantly increase the instrument's sensitivity. The Illinoi group is leading the upgrades to EXO-200 front-end electronics.  The team demonstrated the effectiveness of the upgrade with prototype testing at WIPP in January 2014. The full-scale electronics upgrade which can enhance the detector energy resolution and reduce analysis threshold was planned to take place this summer.

However, the upgrade will need to wait until some issues related to a minor radioactive leak at the Waste Isolation Pilot Plant that houses the observatory are resolved: 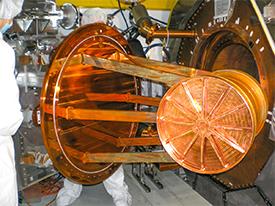 The completed xenon vessel is mounted and ready to be inserted into the cryostat that will keep the xenon isotope in a liquid state. Image courtesy of EXO-200 Collaboration.
“As a consequence of the recent WIPP issues, access to the underground facility has been severely limited, making operation of the EXO experiment impossible since about February 2014,” comments Physics Illinois postdoc Michal Tarka. “We are hoping, however, to gain access to the laboratory as soon as possible and to continue to collect more data with the upgraded detector. This is crucial to our realizing the full potential of our experiment.”

While EXO-200 data taking in on hold, the Illinois group is busy working on R&D for the next generation tonne-scale detector, called nEXO.  The group is building a liquid xenon system to test cryogenic design ideas and critical components of the electronics readout system for nEXO.  In addition, Matthew Coon, a first year graduate student at Physics Illinois, is developing a technique to tag the 136Xe double beta decay daughter nuclei, 136Ba.  If successful, this technique can eliminate all radioactivity-induced background, substantially improving the sensitivity of neutrinoless double beta decay searches.

Coon shares, "We have tests planned for later this year at the CARIBU beam-line at Argonne National Laboratories to study the transport of the daughter nuclei. This will be an essential step towards a nearly background free measurement."

EXO-200 is supported by the DOE and the NSF in the US, NSERC in Canada, SNF in Switzerland, NRF in Korea, RFBR (12-02-12145) in Russia and the DFG Cluster of Excellence 'Universe' in Germany. EXO-200 Data analysis and simulation used resources of the National Energy Research Scientific Computing Center (NERSC), which is supported by the Office of Science of the US DOE under contract no. DE-AC02-05CH11231. The EXO-200 collaboration acknowledges the WIPP for their hospitality. The conclusions presented are those of the scientists and not necessarily those of the funding agencies.