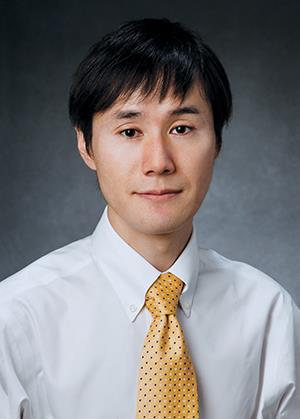 Assistant Professor Shinsei Ryu
Assistant Professor Shinsei Ryu has been awarded a prestigious New Horizons in Physics Prize by the Breakthrough Prize Foundation for his pioneering work in theoretical condensed matter physics. The prize recognizes his fundamental work on the holographic derivation of the entanglement entropy in quantum critical systems and conformal field theories using AdS/CFT correspondence. He shares the award with his collaborator Tadashi Takayanagi of the Yukawa Institute for Theoretical Physics at Kyoto University, Japan, and with Horacio Casini and Marina Huerta of the Instituto Balseiro of the University of Cuyo, Argentina.

The citation reads, "For fundamental ideas about entropy in quantum field theory and quantum gravity."

Professor Eduardo Fradkin is the director of the Institute for Condensed Matter Theory (ICMT) in the Department of Physics at the University of Illinois at Urbana-Champaign. He comments, "This prize is well deserved. Early in his career, Shinsei is making substantial, lasting contributions to the field, advancing our understanding of quantum physics, condensed matter physics, and quantum field theory. He has a great talent for posing insightful, relevant questions and for finding novel and deep insights by drawing from different areas of physics. Quantum entanglement has become a focus of research in diverse areas of physics: Shinsei's work in this area has had an enormous impact in quantum gravity and string theory and in quantum critical systems in condensed matter."

Ryu has made ground-breaking discoveries in the roles of coherence, entanglement, and topology in quantum many-body systems. His development of a "periodic table" classification system for topological insulators and superconductors in three spatial dimensions, devised with collaborators Andreas Schnyder of the Max-Planck-Institut, Akira Furusaki of the University of Tokyo, and Andreas Ludwig of the University of California at Santa Barbara, has had an enormous impact in the field.

Ryu's broad research interests are reflected in a long list of publications in peer-reviewed journals, with subjects ranging from strongly correlated phenomena in microscopic systems, including quantum magnetism and the fractional quantum Hall effect, to the behaviors of mesoscopic systems, especially carbon nanotubes, graphene, and topological insulators. A unifying focus of Ryu's work has been elucidating the roles of the phase degree of freedom of wave functions and entanglement in quantum mechanical systems.

Ryu attributes some of his success to his fruitful collaborations across physics disciplines: "Sometimes a fresh idea and inspiration from different fields can deepen our understanding of condensed matter systems, leading to breakthroughs. I find it quite useful and cross-fertilizing to interact with high energy physicists and quantum information theorists."

Ryu is a member of the ICMT, where he has organized several interdisciplinary theoretical physics workshops that have encouraged the development of "cross-fertilizing" collaborations.

Ryu is the recipient of the 2012 Condensed Matter Science Prize of Japan. In 2013, he was awarded the 27th Nishinomiya-Yukawa Memorial Prize for outstanding research in theoretical physics. In February 2014, he was selected a Sloan Research Fellow by the Alfred P. Sloan Foundation.

Ryu received his bachelor's degree in physics and his master’s, and doctoral degrees in applied physics from the University of Tokyo in 2000, 2002, and 2005, respectively. His doctoral thesis advisor was Yasuhiro Hatsugai.

Ryu completed his first postdoctoral appointment at the Kavli Institute of Theoretical Physics (2005–2008), where he worked with Tadashi Takayanagi to elucidate a holographic derivation of the entanglement entropy in quantum field theories from anti–de Sitter field theory; the formalism they introduced is now known as the "Ryu–Takayanagi formula."

Ryu went on to complete a second postdoctoral appointment at the University of California at Berkeley (2008–2011), where he continued to use high-energy theory, and more specifically string theory, to inform discoveries in condensed matter relating to topological insulators and superconductors.

Ryu joined the faculty at Physics Illinois in 2011.

Ryu's prize was awarded on November 10, 2014, during a scientific symposium at Stanford University that featured talks by the 2015 Breakthrough Prize laureates.