Professor Nathan has most recently been working on an exciting new experiment on real Compton scattering (RCS) at the Thomas Jefferson National Accelerator Facility (JLab). The ultimate physics goal of the RCS experiment, of which Professor Nathan is co-spokesperson, is to learn about the underlying structure of the proton by observing how the fundamental constituents (quarks and gluons) interact with each other.

To measure the probability of Compton scattering, a beam of high-energy protons, a proton-containing target, and a pair of detectors to detect the recoil proton and the scattered photon are needed. Professor Nathan's role in the RCS experiment is overall management of the design and construction of a full-scale photon spectrometer at JLab. He also heads one of the working groups, which is charged with putting together and testing the extensive set of data acquisition electronics needed to integrate the detectors to an online computer.

In addition to his research accomplishments, Professor Nathan is an enthusiastic and highly regarded teacher. He is a regular member of the University's list of "Teachers Ranked as Excellent by their Students."

In more recent years, my research has focused on the physics of baseball. My two broad interests are the dynamics of the collision between the ball and bat and the aerodynamics of a baseball in flight. I am particularly interested in new technologies that enable the study of these topics with unprecedented precision. 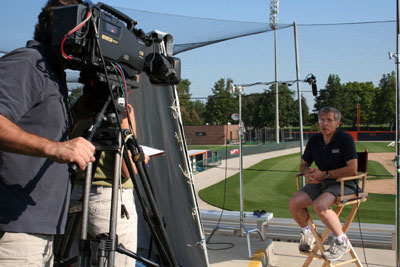 Alan Nathan being interviewed for a National Geographic television special on baseball
(aired July 6, 2007); UI's Eichelberger Field is in the background.

Professor Nathan presently serves on the editorial board of the journal Sports Engineering and has served on panels advising major league baseball, the Amateur Softball Association, the NCAA, and USA Baseball. His 2003 American Journal of Physics paper (A.M. Nathan, Characterizing the performance of baseball bats, Am. J. Phys. 71, 134, 143 [2003]) serves as the basis for present efforts to regulate the performance of non-wood bats.

'Runs and Data: The Science of Illinois Baseball' documentary premieres May 4 on Big Ten Network

Alan Nathan on the physics of baseball in Forbes article, 'Using the Major League Ball in the Top Minor Leagues Has Led to More Homers'