Sir Anthony J. Leggett, the John D. and Catherine T. MacArthur Professor and Center for Advanced Study Professor of Physics, has been a faculty member at Illinois since 1983. He is widely recognized as a world leader in the theory of low-temperature physics, and his pioneering work on superfluidity was recognized by the 2003 Nobel Prize in Physics. He is a member of the National Academy of Sciences, the American Philosophical Society, the American Academy of Arts and Sciences, the Russian Academy of Sciences (foreign member), and is a Fellow of the Royal Society (U.K.), the American Physical Society, and the American Institute of Physics. He is an Honorary Fellow of the Institute of Physics (U.K.). He was knighted (KBE) by Queen Elizabeth II in 2004 "for services to physics."

Professor Leggett has shaped the theoretical understanding of normal and superfluid helium liquids and other strongly coupled superfluids. He set directions for research in the quantum physics of macroscopic dissipative systems and use of condensed systems to test the foundations of quantum mechanics. His research interests lie mainly within the fields of theoretical condensed matter physics and the foundations of quantum mechanics. He has been particularly interested in the possibility of using special condensed-matter systems, such as Josephson devices, to test the validity of the extrapolation of the quantum formalism to the macroscopic level; this interest has led to a considerable amount of technical work on the application of quantum mechanics to collective variables and in particular on ways of incorporating dissipation into the calculations. He is also interested in the theory of superfluid liquid 3He, especially under extreme nonequilibrium conditions, in high-temperature superconductivity,in the low-temperature properties of glasses and in topological quantum computing,particularly in so-called "p+ip" Fermi superfluids. 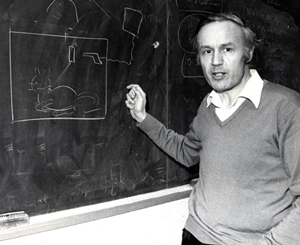 Aspects of Cuprate Superconductivity
We are exploring a scenario for cuprate superconductivity in which a major factor is the reduction, due to increased screening by the Cooper pairs, of the long-wavelength, mid-infrared-frequency part of the Coulomb interaction. In addition, independently of this scenario, we are attempting to explain the c-axis transport properties of the cuprates and are looking at some problems associated with the "pseudogap" regime and with the peculiar features resulting from the existence of gap nodes.

Experimentally Oriented Studies of Basic Conceptual Issues in the Foundations of Quantum Mechanics
We are studying the application of the quantum-mechanical formalism to the description of various experiments that severely test one’s understanding of its meaning. In addition, we study possible alternative explanations of ostensibly relevant experiments in the literature.

Superfluidity and Phase Coherence in Very Degenerate Atomic Gases
Studies are being made of the superfluid density of an arbitrary many-body system, possible phase-coherence and interference experiments in Bose-condensed atomic gases, superfluidity in very degenerate dilute Fermi gases, and thermal transport in the ultralow-temperature regime of superfluid 3He.

Leggett to be inducted to Engineering at Illinois Hall of Fame