Professor Phillips is a theoretical condensed matter physicist who has an international reputation for his work on transport in disordered and strongly correlated low-dimensional systems. He is the inventor of various models for Bose metals, Mottness, and the random dimer model, which exhibits extended states in one dimension, thereby representing an exception to the localization theorem of Anderson's.

His research focuses sharply on explaining current experimental observations that challenge the standard paradigms of electron transport and magnetism in solid state physics. Departures from paradigms tell us that there is much to learn. Such departures are expected to occur in the presence of strong-electron interactions, disorder, and in the vicinity of zero-temperature quantum critical points. The common question posed by experiments that probe such physics is quite general. Simply, how do strong Coulomb interactions and disorder conspire to mediate zero-temperature states of matter? It is precisely the strongly interacting electron problem or any strongly coupled problem for that matter, such as quark confinement, that represents one of the yet-unconquered frontiers in physics. Understanding the physics of strong coupling is Phillips' primary focus. 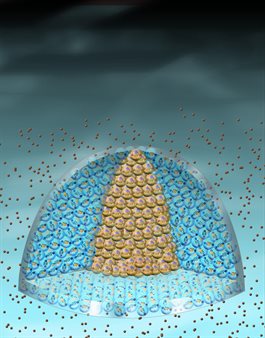 The cuprate superconductors are doped Mott insulators whose phase diagram exhibits numerous departures from Fermi liquid theory, most notably the pseudogap and strange metal (resistivity scaling linearly with temperature) regimes of the normal state. Typical approaches to this problem include 1) phenomenology based on some preferred ordered state, 2) numerical simulations, and 3) inspired guesses as to the low-energy degrees of freedom. Our work aims to establish a general principle from which the inherent strong-coupling physics of a doped Mott insulator arises. Ultimately the route to solving any strongly coupled problem is to isolate the propagating degrees of freedom. Typically the propagating modes cannot be read off by inspecting a Hamiltonian but rather are dynamically generated through a collective organization of the elemental fields. In identifying the principle that leads to such organization, it helps to know what to throw out. A ubiquitous phenomenon in strongly correlated systems such as a doped Mott insulator, not seen in weakly interacting systems, is spectral weight transfer over wide energy scales. The general class of phenomena arising from such transfer of spectral weight we termed Mottness. Determining what are the strongly correlated entities that get rid of spectral weight transfer would then re-instate a rigid band picture, rendering the problem then weakly coupled. We have succeeded in doing precisely this by integrating out exactly the high-energy degrees of freedom in a doped Mott insulator described by the Hubbard model. New propagating degrees of freedom, bound states of holes and charge 2e bosons, emerge which are capable of explaining the pseudogap and the transition to the strange metal regimes. Much of our current effort is on elucidating how these new degrees of freedom pair up to form the superconducting state.

Fe-based Superconductors
Discovered in 2006, Fe-based superconductors are multi-orbital systems in the intermediate coupling regime. That is, neither purely localized nor itinerant electron pictures are valid. Undoped, the parent Fe-based materials are all metals, though they exhibit magnetic order. We are currently exploring models in which orbital ordering, magnetism, and superconductivity are intertwined.

Dirty Bosons
In the presence of disorder, bosons form a glassy insulating phase characterized by a vanishing gap, finite compressibility, and infinite superfluid susceptibility. One of the outstanding questions in the field of dirty bosons, a field which is becoming increasingly accessible to optical lattice experiments, is what is the universality class of the Bose glass to superfluid transition. Renormalization group calculations on the disordered Bose-Hubbard model are currently being performed to address this problem. A second problem of interest is the nature of the metallic phase that disrupts the superconductor-insulator transition in dirty thin film superconductors such as Al deposited on Ge. Such a metallic phase poses a distinct problem because bosons are thought to exist in two phases: localized in an insulator or delocalized in a superconducting state. We showed several years ago that a third possibility exists in which bosonic excitations of a phase glass exhibit a non-zero conductivity at zero temperature. An open question with this model is the nature of the phase stiffness at finite temperature.

Topological Insulators
Topological insulators possess robust surface states which can in principle exhibit metallic behavior. We have become interested in this general class of problem in light of experiments on elemental bismuth (not a topological insulator) that have reported anomalous quantum oscillations at high magnetic fields (Ã‚Â¡ÃƒÂÂÂÂ�9 T) along the trigonal crystal axis. The curious feature of these oscillations is that they occur at magnetic fields which would conrespond to fractional occupancy of Landau levels, in a manner reminiscent of the FQH effect in 2d. We currently know of no instances of electron fractionalization in 3d and what we know about the fractional quantum Hall effect indicates that 2d is essential. Hence, these experiments have raised a potentially interesting question. Our current thinking on this problem is that the surface states are mediating the observed oscillations in the Nernst effect and a proper theory of the surface states indicates integer occupancy of the surface Landau levels. We are currently exploring if surface states in Bi-Sb alloys can similarly give rise to the recent claims of quantum oscillations associated with a 2d Fermi surface. 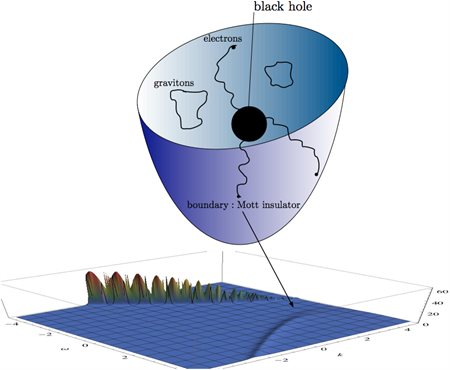 My emphasis that the cuprate problem is fundamentally one of strong coupling has led to a search for new theoretical tools. One such tool is the gauge/gravity duality or the AdS/CFT conjecture, in which a strongly coupled quantum theory is mapped onto a weakly interacting theory of gravity.

I am interested in extracting the physics of the strong-coupling physics of the Hubbard model using this technique. I am taking two different approaches towards this problem, namely top-down and bottom-up. In a top-down approach, a holographic Hubbard model is constructed at the intersection of D-branes (open strings with Dirichlet boundary conditions), while in the bottom-up approach, one tries to engineer a minimal gravitational system to mimic the essential features of the model. The results of a bottom-up scheme are shown in the accompanying figure. We have shown that at the boundary of an AdS Reissner-Nordstrom space-time with a bulk Pauli coupling, fermions are gapped. No continuous symmetry is broken once the gap opens and spectral weight is transferred over all energy scales, as in the Hubbard model of a doped Mott insulator.