Professor Robinson received Ph.D. in biophysics from Harvard in 1981, after receiving a M.A. in physics from the University of Cambridge in 1976. He was a member of the technical staff at AT&T Bell Labs (Murray Hill, NJ) from 1981 to 1992, where he shared responsibility (with P. Fuoss) for the development and implementation of an x-ray surface diffraction beamline at the National Synchrotron Light Source at Brookhaven National Laboratory. He came to the University of Illinois as a professor of physics in 1992.

Professor Robinson is a condensed matter experimentalist who pioneered the application of x-ray scattering to studies of crystallography and the structure of semiconducting surfaces. He is presently one of the world's leaders in synchrotron x-ray diffraction and the structure of metal and semiconductor surfaces. He has provided some of the most precise information on surface order-disorder transitions and has also studied the effects of roughening and other surface step phenomena. He is currently working to develop coherent diffraction techniques for the analysis of materials and the investigation of fluctuations in condensed matter.

In Situ X-Ray Diffraction Studies of Surfaces and Interfaces 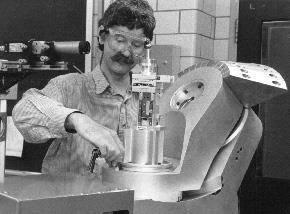 We are operating a surface x-ray diffraction station connected to the same vacuum system as a number of MBE growth chambers in the EpiCenter central facility. The equipment has full three-dimensional capabilities and is optimally designed for structure determination at surfaces and interfaces of samples transferred directly from one of the growth chambers. X-ray diffraction data allow precise atomic-level structural information to be obtained. The analysis is nondestructive, so growth experiments may be continued after analysis. We are currently using this for determining segregation profiles in semiconductor and metal heterostructures, such as Sn/Ge(100) and Ge/Si(100).

Solid-Liquid Interface Studies by X-Ray Diffraction We have constructed a high-speed diffractometer, employing the "kappa" geometry, for use on the X16C beamline at NSLS, Brookhaven National Laboratory. The beamline has a focused beam of 1010 photons per second in a submillimeter spot on the sample. There we use a teflon environmental cell with a thin mylar window to hold samples inside liquids under full electrochemical control. The thin-layer geometry allows the transmission of the x-ray beam to the sample and out again. As part of a campuswide effort, we are studying metal and ionic adsorbed species on copper surfaces, to try to gain an understanding of copper corrosion.

Coherent X-Ray Diffraction In these experiments, we prepare beams of x-rays that are so narrow that they are coherent across their width. A diffraction measurement with such a beam is representative of the entire object under illumination. An image of the object can therefore be derived by inversion of its diffraction pattern, using computer algorithms.