Astrophysical relativistic jets can project the power of over a billion stars continuously for millions of years. But where does all the energy come from? Leading theories tap into a consequence of Einstein’s general relativity: spinning black holes drag spacetime with them as they rotate. Magnetic field lines near the hole get pulled along with the twisting spacetime and siphon the spin energy away from the hole into an electromagnetic jet. 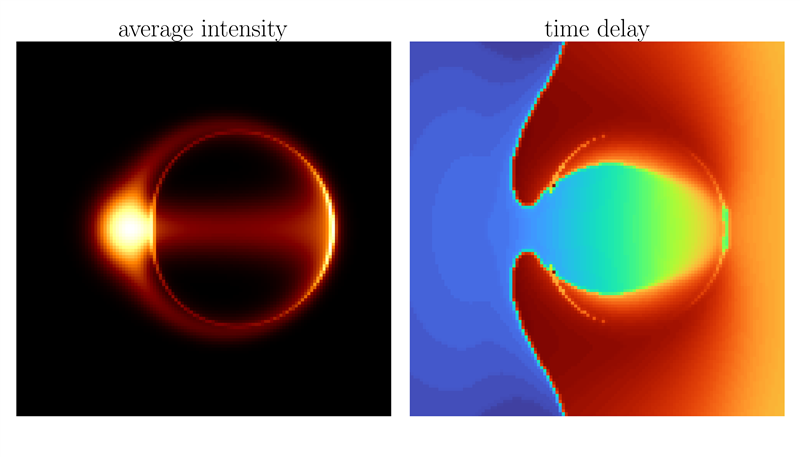 When a hotspot flashes near a black hole, it lights up different parts of the image at different times. The time-averaged image (left) obscures the rich temporal signatures produced by the spacetime.

In order to probe the theoretical black hole–jet connection, it is helpful to first measure how quickly the black hole is spinning. Unfortunately, many proposals for how to measure the spin rely on assumptions about the geometry of the plasma that falls onto the hole. If these assumptions are inaccurate, then the spin measurement could miss the mark.

In my recent paper, which appears in The Astrophysics Journal, I predict the existence of a new spin-dependent phenomenon that produces a characteristic, positional echoing in black hole movies. I call this effect black hole glimmer. The properties of glimmer connect directly to the underlying spacetime geometry, so they are unaffected by uncertainties in the plasma physics model. The universality of the glimmer signature offers a new way to robustly determine black hole spin. 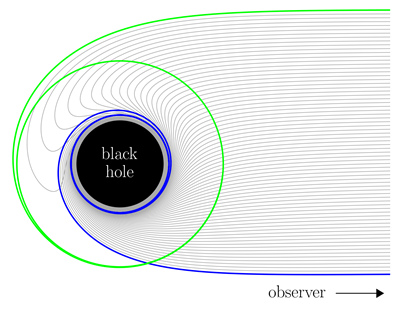 As light travels in space near a black hole, its path is deflected by the gravitational influence of the hole. Circular orbits with positive angular momentum (blue) are pulled along with the hole and lie at smaller radii compared to their negative angular momentum (green) counterparts. Circular orbits produce echoes, and since the blue orbit is shorter than the green one, the observer sees the bottom of the image (blue) echo more rapidly than the top (green).
The idea is to measure how the black hole bends space by looking for a set of light echoes across the image frame. Any light that travels near a black hole is deflected by the gravitational pull of the hole. This deflection is so strong that two photons produced by the same light source might take drastically different paths to a far-away observer. The difference between the two path lengths can delay the arrival of one photon relative to the other. This delay produces a light echo.

When the light travels in just the right direction, its path can wind completely around the hole. The magnitude and direction of the deflection depends on both the location of the light relative to the hole and the speed at which the hole is spinning. This means that the time it takes light to orbit a spinning hole in one direction can be different than the time it takes to orbit it in another one.

But not every orbit will produce an echo. Orbits in general relativity precess (the famous perihelion precession of Mercury was one of the early tests of the theory), so most orbits never return to the same location in space. Only orbits that are closed will echo, since an orbit must pass through the same source multiple times to produce multiple signals.

When the black hole is spinning, only two orbits trace perfect circles. The other orbits follow complicated paths through all three dimensions of space and lie at intermediate radii between the co-rotating (blue) and counter-rotating (green) circular ones. Each orbit maps to a different location on the black hole image. Since each orbit also has a different length, different parts of the image echo with different periodicities.

Each light orbit is visible in a different part of the final image, so different parts of the image will echo with different periods. This position-dependent spectrum of echoes defines black hole glimmer and provides a direct way to measure the spin of the hole. Deviations from the glimmer prediction could even provide evidence for alternate theories of gravity.

I use numerical simulations to validate the result and investigate what kind of measurements might be possible. Existing experiments like the Event Horizon Telescope may not be sensitive enough to see glimmer, but future experiments will be. Having a concrete understanding of different spin signatures will provide a roadmap for future experiment design.

These results were published in a paper entitled "Black Hole Glimmer Signatures of Mass, Spin, and Inclination," which appeared in The Astrophysical Journal on March 19, 2021. This research was supported by the National Science Foundation and by a Donald C. and F. Shirley Jones Fellowship.