In PNAS, "Generic character of charge and spin density waves in superconducting cuprates"

Enjoyed this read? Share it on social media and vote here to help the author win dinner at a local restaurant for their research group! For more information, see submission eligibility and guidelines for the Research Highlight Science Writing Contest.

The essential physics of the cuprate high-temperature superconductors have been a central focus of condensed-matter physics for more than three decades. Although initially controversial, it is now clear that a ubiquitous tendency toward charge-density-wave (CDW) order is intertwined with the superconductivity. However, this manifests differently in distinct cuprates. On the basis of extensive X-ray and neutron scattering studies of the temperature and doping dependence of the CDW and spin-density-wave (SDW) correlations in one representative cuprate and a comparison with existing studies on other cuprates, we show that there plausibly is a single, preferred CDW order at the microscale, whose manifestation at low temperatures is modified in predictable ways by material-specific details, including its interaction with SDW order. 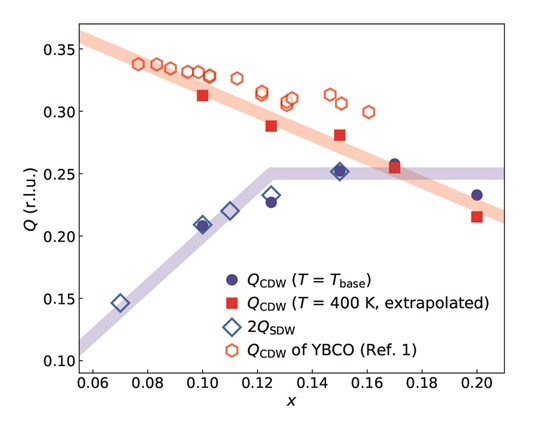 Charge density waves (CDWs) have been observed in nearly all families of copper-oxide superconductors. But the behavior of these phases across different families has been perplexing. In La-based cuprates, the CDW wavevector is an increasing function of doping, exhibiting the so-called Yamada behavior, while in Y- and Bi-based materials the behavior is the opposite. Here, we report a combined resonant soft X-ray scattering (RSXS) and neutron scattering study of charge and spin density waves in isotopically enriched La1.8−x

Eu0.2SrxCuO4 over a range of doping 0.07≤x≤0.20. We find that the CDW amplitude is temperature independent and develops well above experimentally accessible temperatures. Further, the CDW wavevector shows a nonmonotonic temperature dependence, exhibiting Yamada behavior at low temperature with a sudden change occurring near the spin ordering temperature. We describe these observations using a Landau–Ginzburg theory for an incommensurate CDW in a metallic system with a finite charge compressibility and spin-CDW coupling. Extrapolating to high temperature, where the CDW amplitude is small and spin order is absent, our analysis predicts a decreasing wavevector with doping, similar to Y and Bi cuprates. Our study suggests that CDW order in all families of cuprates forms by a common mechanism.

This work was published in the Proceedings of the National Academy of Sciences (PNAS) on April 4, 2022.

In PNAS, "Generic character of charge and spin density waves in superconducting cuprates"

"Stranger than metals" in the journal Science

Peering inside the core of a neutron star using gravitational waves