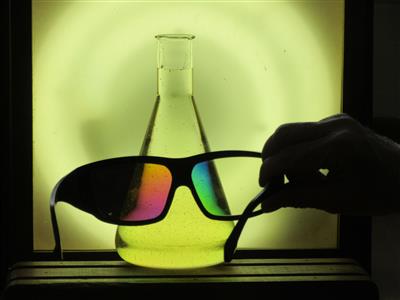 The chiral corn-syrup molecules in the beaker twist the backlight's horizontal polarization, and the further the light travels through the syrup, the more it's twisted. This can be viewed through the 3D glasses' polarizing lenses—the blue light has passed through more syrup than the red light.
It’s up to you and your team to save the free world from evil forces plotting its destruction, and you have precisely 60 minutes to do it. You must find out what happened to Professor Schrödenberg, a University of Illinois physicist who disappeared after developing a top-secret quantum computer that can crack any digital-security encryption code in the world.  Unfortunately, the previous groups of special agents assigned to the case disappeared while investigating the very room in which you now find yourself locked up, Schrödenberg’s secret lab.

LabEscape is a new science-themed escape room now open at Lincoln Square Mall in Urbana, testing the puzzle-solving skills of groups of up to six participants at a time. Escape rooms, a new form of entertainment cropping up in cities across the U.S. and around the globe, provide in-person mystery-adventure experiences that have been compared to living out a video-game or movie script. A team of participants is presented with a storyline and locked into a room with only one hour to find and decipher a sequence of interactive puzzles that will unlock the door and complete the mission. Two escape room businesses are already in operation in the area, C-U Adventures in Time and Space in Urbana and Brainstorm Escapes in Champaign.

Paul Kwiat, a physics professor at the University of Illinois at Urbana-Champaign, initiated the LabEscape project one year ago as a community outreach effort, with the goal of showing that science is not only fun, it’s useful, relevant, amazing, and accessible to all.

“So many people have a fear of science and technology, because they have this idea that it’s too hard. So they don’t try,” Kwiat comments. “But kids come into the world with the curiosity of scientists. Unfortunately, for many people, that gets lost. That’s why our first goal in creating LabEscape was to make it a fun and memorable experience, and I think we’ve achieved that.”

To get the project off the ground, Kwiat enlisted support from sponsors and the help of physics department colleagues, Professor Tim Stelzer and IT director Rebecca Wiltfong, along with a group of 12 undergraduate physics students, and together they’ve created a unique interactive adventure using puzzles largely based on physical phenomena.

Kwiat emphasizes, no one need fear the science: the scientific knowledge required to solve any given puzzle is provided among the clues in the escape room. So while the storyline is based on quantum physics, no prior understanding of quantum physics is needed to succeed in saving the free world at LabEscape.

“Though most of the more than 200 test players to date have been adults, everything is targeted to a junior-high or high-school level of understanding. We’ve had a number of junior-high students go through and they all had a blast—they had no more trouble with the science puzzles than the physics graduate students!” Kwiat assures.

In his own cutting-edge research, Kwiat manipulates the quantum behaviors of entangled photons to develop techniques for secretive communications with unbreakable encryption, so he is uniquely qualified to write Dr. Schrödenberg’s storyline. Kwiat says he’s grateful to Chris and Anne Lukeman, co-founders of C-U Adventures in Time and Space in Urbana, for volunteering their expertise in developing escape rooms.

“For me, a compelling escape room experience means the storyline needs to make perfect sense. Why there are puzzles and why there is a time limit—it all needs to fit the story. Physics-based puzzles work really well here because they are so interactive—we study and manipulate physical things and physical effects.”

Kwiat plans to add a second storyline, a sequel that will play out in the same room with other clues, before the start of next academic year. For now, two levels of play are available within the one storyline; the advanced mode adds several puzzles beyond those in the novice mode.

Kwiat adds, “Curiosity, communication, and collaboration—the three C’s—are really all that’s needed to solve the LabEscape puzzles. Incidentally, those same three attributes are integral to successful scientific research. The STEM fields—science, technology, engineering, and math—are vital to so many aspects of modern life, and we need more young people to select STEM career paths. So in addition to having fun, we hope young people who go through will achieve a sense that science is amazing, relevant, and useful in an accessible way. That’s something that isn’t always appreciated.”

LabEscape will host its grand opening on January 28; a soft opening this week means eager puzzle enthusiasts don’t have to wait to book an adventure. Tickets are $20 per person, or $15 with a student ID. Reservations must be booked online at LabEscape.org.

Day to day operations at LabEscape are being handled by a team of U of I student employees who have completed several core physics courses. Financial support for this outreach project has been provided by the American Physical Society, and by the Department of Physics and the Academy for Excellence in Engineering Education at the U of I at Urbana-Champaign. Proceeds above the cost of development and operation will support Urbana-Champaign’s STEM-related community outreach efforts.