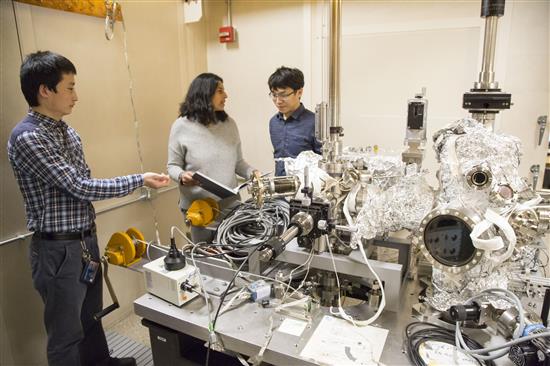 Vidya Madhavan, a professor of physics at the University of Illinois at Urbana-Champaign, works with students in her lab, in the Frederick Seitz Materials Research Lab. Madhavan specializes in condensed matter experimentation. Photo by L. Brian Stauffer, University of Illinois at Urbana-Champaign
Since the discovery two decades ago of the unconventional topological superconductor Sr2RuO4, scientists have extensively investigated its properties at temperatures below its 1 K critical temperature (Tc), at which a phase transition from a metal to a superconducting state occurs. Now experiments done at the University of Illinois at Urbana-Champaign in the Madhavan and Abbamonte laboratories, in collaboration with researchers at six institutions in the U.S., Canada, United Kingdom, and Japan, have shed new light on the electronic properties of this material at temperatures 4 K above Tc. The team’s findings may elucidate yet-unresolved questions about Sr2RuO4’s emergent properties in the superconducting state.

Vidya Madhavan, a physics professor and member of the Frederick Seitz Materials Research Lab at the U. of I., led the experiment. She explains, “We began from the widely held assumption that, in Sr2RO4’s normal metallic state above its Tc, the interactions of electrons would be sufficiently weak, so that the spectrum of excitations or electronic states would be well defined.”

Madhavan continues, “However, and this is a big surprise, our team observed large interaction effects in the normal metallic state. Electrons in metals have well defined momentum and energy. In simple metals, at low temperatures the electrons occupy all momentum states in a region bounded by a ‘Fermi surface.’ Here we found that the velocity of electrons in some directions across the Fermi surface were reduced by about 50 percent, which is not expected. We saw similar interaction effects in the tunneling density of the states. This is a significant reduction, and it was a great surprise. We thought we would just find the shape of the Fermi surface, but instead, we get these anomalies.” 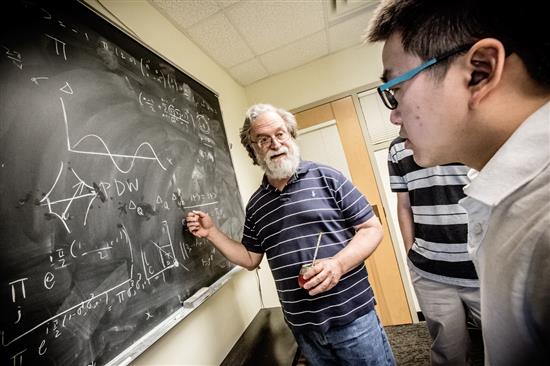 Eduardo Fradkin, a professor of physics and director of the Institute for Condensed Matter Theory (ICMT) at the University of Illinois at Urbana-Champaign, works with theoretical condensed matter grad students in his group, at the ICMT. Photo by L. Brian Stauffer, University of Illinois at Urbana-Champaign
Eduardo Fradkin, a physics professor and the director of the Institute for Condensed Matter Theory at the U. of I., comments, “The basic electronic properties of this material have been known for some time. Scientists study this material because it’s supposed to be a simple system for testing scientific effects. But the material has also been a source of ongoing debate in the field: this is a p-wave superconductor, with spin-triplet pairing. This has suggested that the superconducting state may be topological in nature. Understanding how this system becomes superconducting is an open and intriguing question.”

The breakthrough to understanding the puzzling properties of the material’s superconducting state may lie in this anomalous normal (non-superconducting) state. In a conventional normal metallic state at low temperature, the electronic states behave as well defined quasi-particles, as described by the Landau-Fermi liquid theory. But the researchers found anomalies in the particle interactions at 5 K that actually characterize Sr2RuO4 as a “strongly correlated metal.” 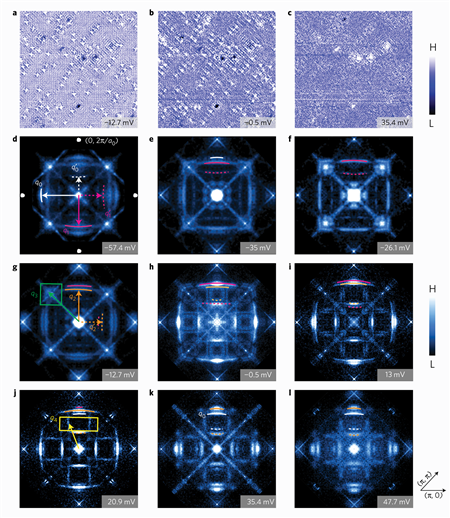 This research relies on current-measurement techniques that are highly sensitive, yielding very precise results. Images a-c represent conductance maps at varying energy levels. The high-resolution images d through l were taken with Fourier transform scanning tunneling spectroscopy; the bright square reveals the presence of an electron with a particular wavelength. In the superconducting state, these lights would disappear when electrons pair up into Cooper pairs. Image courtesy of Vidya Madhavan, University of Illinois at Urbana-Champaign, Department of Physics and Frederick Seitz Materials Research Laboratory
In the experiment, Madhavan’s team passed electrons into the material using an electronic metallic tip, then measured the resultant current using two highly advanced and complementary techniques, Fourier transform scanning tunneling spectroscopy and momentum resolved electron energy loss spectroscopy. In four data runs, the scientists found a significant change in the probability of the electron tunneling near zero energy, as compared with Fermi-liquids.

“We were surprised to see so much rich information,” shares Madhavan. “We started talking to Eduardo about the theory and to Peter Abbamonte about his experiments. Abbamonte’s group, applying the technique of momentum resolved electron energy loss spectroscopy, also finds interactions with collective modes at the same energies.”

The team plans to delve into that question next: “When Vidya goes to the superconducting state, we will know more,” Fradkin affirms. “These findings will enable her to take a unique approach to revealing the superconducting order parameter of this material in upcoming experiments.”

Advance online publication of these results appeared May 8, 2017, in Nature Physics.

This research was supported by the US Department of Energy, the Gordon and Betty Moore Foundation, and the National Science Foundation.