Sir Anthony J. Leggett. Photo by L. Brian Stauffer, University of Illinois at Urbana-Champaign
Sir Anthony Leggett, winner of the 2003 Nobel Prize in Physics and the John D. and Catherine T. MacArthur Professor of Physics at the University of Illinois at Urbana Champaign, turned 80 years old on March 26. To celebrate, the Department of Physics is hosting a physics symposium in his honor, with participants coming from around the world. The symposium, “AJL@80: Challenges in Quantum Foundations, Condensed Matter Physics and Beyond,” is targeted for physicists and requires pre-registeration. It begins tonight, Thursday evening, and will go through Saturday evening (March 29 – 31, 2018).

In conjunction with the symposium, two public presentations will be offered back-to-back on Friday, March 30, starting at 7:30 p.m., at the I Hotel and Conference Center’s Illinois Ballroom. (1900 S. First St., Champaign). There is no admission fee and registration is not required—all are welcome.

First up Friday evening starting at 7:30 p.m. will be the premier performance of a theatrical production entitled, “Quantum Voyages.” This work, the collaborative effort of U of I physics professor Smitha Vishveshwara and U of I theatre studies professor Latrelle Bright, tells the story of the quantum realm.

Starting at 8:30 p.m., U of I alumnus and University of California, Santa Barbara Professor of Physics Matthew Fisher will give a popular talk entitled,“Are We Quantum Computers, or Merely Clever Robots?”

Sir Anthony J. Leggett, the John D. and Catherine T. MacArthur Professor and Center for Advanced Study Professor of Physics, has been a faculty member at Illinois since 1983. He is widely recognized as a world leader in the theory of low-temperature physics, and his pioneering work on superfluidity was recognized by the 2003 Nobel Prize in Physics. He is a member of the National Academy of Sciences, the American Philosophical Society, the American Academy of Arts and Sciences, the Russian Academy of Sciences (foreign member), and is a Fellow of the Royal Society (U.K.), the American Physical Society, and the American Institute of Physics. He is an Honorary Fellow of the Institute of Physics (U.K.). He was knighted (KBE) by Queen Elizabeth II in 2004 "for services to physics."

Professor Leggett has shaped the theoretical understanding of normal and superfluid helium liquids and other strongly coupled superfluids. He set directions for research in the quantum physics of macroscopic dissipative systems and use of condensed systems to test the foundations of quantum mechanics. His research interests lie mainly within the fields of theoretical condensed matter physics and the foundations of quantum mechanics. He has been particularly interested in the possibility of using special condensed-matter systems, such as Josephson devices, to test the validity of the extrapolation of the quantum formalism to the macroscopic level; this interest has led to a considerable amount of technical work on the application of quantum mechanics to collective variables and in particular on ways of incorporating dissipation into the calculations. He is also interested in the theory of superfluid liquid 3He, especially under extreme nonequilibrium conditions, in high-temperature superconductivity,in the low-temperature properties of glasses and in topological quantum computing,particularly in so-called "p+ip" Fermi superfluids.

About the performance, “Quantum Voyages”

by Smitha Vishveshwara and Latrelle Bright, both of University of Illinois at Urbana-Champaign in collaboration with a Quantum-Theater crew and with cameo appearance by local physicists Brian DeMarco, Anthony Leggett, Virgina Lorenz, Nadya Mason, Dale Van Harlingen 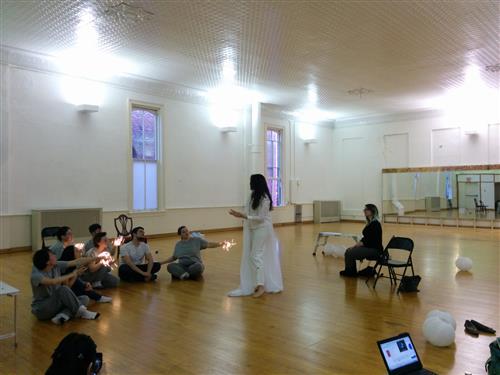 Illinois physics professor Gina Lorenz, center, playing a quantum sage, uses poetry to explain concepts of light in the interdisciplinary performance piece 'Quantum Voyages.' It was created by Illinois physics professor Smitha Vishveshwara and theatre professor Latrelle Bright to offer a look at basic concepts of quantum physics. Courtesy Smitha Vishveshwara
Guided by Sapienza, the spirit of knowledge, two voyagers enter the microscopic realm of atomic landscapes and quantum conundrums to discover a magnificent and baffling world, foreign to every day human experience. As in epic adventures and fairy tales, like Ovid’s Metamorphosis or the Nutcracker ballet, the voyagers explore land after land, each tickling the viewer’s imagination and, unlike fairy tales, offering glimpses of a world we believe actually resides around us. The trio confront terrifying prospects of being dead and alive at once, encounter electrons acting as waves, are pelleted by photons, glide through diaphanous orbitals of atoms, precess in magnetic resonance imaging machines, levitate above superconducting surfaces, and navigate disordered quantum terrains within complex materials. The two voyagers emerge awakened to the miniscule landscapes within us and to the affirmation that things are never what they seem.

There will be a second performance of “Quantum Voyages” on April 4 at Beckman Institute.  Maeve Reilly is the contact person for that performance. Reilly, Maeve J mjreilly@illinois.edu.

About the popular talk, “Are We Quantum Computers, or Merely Clever Robots?”

by Professor Matthew Fisher of the University of California, Santa Barbara 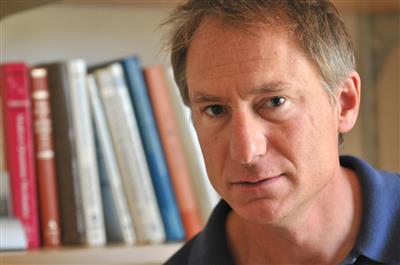 UCSB Professor and U of I alumnus Matthew Fisher
Designing and building quantum computers in the laboratory is now a billion-dollar enterprise. But might we, ourselves, be quantum computers, rather than just clever quantum engineers? A commonly held belief is that quantum information processing is not possible in the warm, wet brain, because it requires the fulfillment of so many unrealizable conditions. My strategy is one of reverse engineering, seeking to identify the biochemical substrate and mechanisms that could host such putative quantum processing. Remarkably, a specific neural qubit and a unique collection of ions, molecules, and enzymes can be identified, illuminating an apparently single path toward nuclear-spin quantum processing in the brain.
If you have questions about the Department of Physics or ideas for other stories, contact Siv Schwink, 217.300.2201